I’ve posted a series of interviews with the chefs of the hotels’ respective restaurants on the corporate blog: You’d be much better here. Here’s what chef Gray Kunz, Taki Panayotakos, Maxy Levy and Marino D’antonio have to say about their menus. 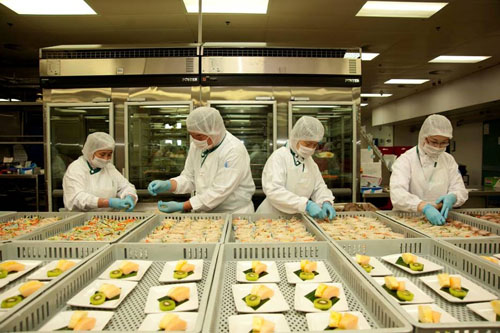 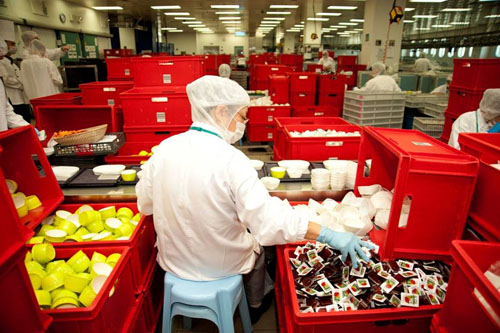 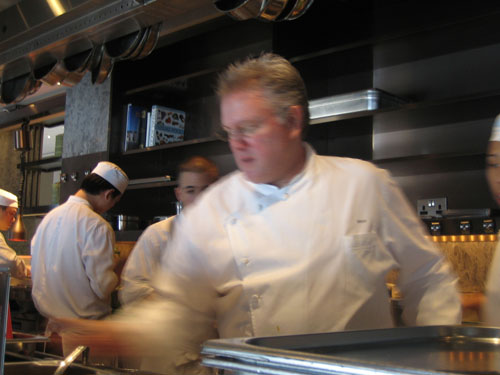 Chef Gray Kunz was born in Singapore and raised in Switzerland. He began his career as a chef-apprentice in Bern, working in top restaurants in Europe that led him to Hong Kong, New York and then back to Hong Kong where he set up his latest Asia outpost–Cafe Gray Deluxe @ The Upper House Hong Kong in 2009.

Kunz was awarded the James Beard Foundation award for Best Chef in New York City in 1995 and was nominated for Best American Chef in 1996, 1997, and 1998. He also received the Mobil 5 Diamond Award in 1996, 1997, and 1998 and was inducted into the Restaurant Hall of Fame in 1998 by the Culinary Institute of America. Kunz currently shares his artistry and experience through Kunz Management.

What is the idea behind the dishes and tips on the best way to cook it?

I think in general braised meat items, due to the fact that they are most often kept in their braising juices are the best suited for inflight meals. The other reason is that for safety reasons, catered inflight foods have to be heated and then cooled down and reheated again to avoid any contamination and various other factors.

Plating the inflight dishes – why do you do what you do and how to do it best. Any particular colours?
I like to use root vegetables versus green veggies because of colour loss on greens. This clearly also depends what season we are in, and winter is most suitable for roasted root vegetables. If greens are applied I like to keep them to salads, single dish pot roasts and adding the greens at the end of each application.

Your thoughts on a gourmet meal 30,000 feet above sea level, is it possible?
A gourmet meal is certainly feasible, as long one stays in the boundaries for the possibilities.
As far as inflight plating, the business class travelers have pre-plated individual containers , where as in first class plated food is absolutely do-able.

I think plating at 30,000 feet is a riot!
As you know I am a pilot and love the idea of helping Cathay Pacific with food and flying!

*****
Marino D’Antonio is the Chef de Cuisine of Sureño. Hailing from Bergamo Italy, D’Antonio’s experience includes his early pastry training in Toulouse, France, a stint in London and subsequently trained under chef Luciano Tona in the Michelin-starred restaurant La Fermata in Casatenovo, Italy.

What is the concept and idea behind those inflight menus?
I want to let the guests experience the flavours of the Mediterranean region–fresh and simple flavourful food.

What’s the best tips on cooking dishes served on board?
To do a good braise, the tip is to first sear the meat on a hot surface and then transfer it in another pan at a very low temperature, cooking it for a long time and adding liquid such as wine or stock from time to time. Braised meats work particularly well to be served on board as it retains its juices and flavours.

Tell us about the choice of ingredients that you’ve put to the mix
We prepared the menu based on the recipes we use in Sureño, considering the most suitable dishes for serving inflight is braised meat or quickly sautéed fish to keep the product moist and tasty during the journey. Vegetables that are paired with the main course are chosen based on a balance of visual and taste.

Could you share a little about plating the inflight dishes
I like to use corn, carrots and bell peppers as well as polenta with roasted tomatoes because it’s some of my personal favourites, plus the vibrant colours really add to the presentation of the dish.

Your thoughts on a gourmet meal 30,000 feet above sea level, is it possible?
When one flies on CX, they have high expectations, so it is important to try to recreate for them the experience that they would have in our restaurant in as many details as possible. So, yes, I think it is possible with the right choice of ingredients and cooking methods.

*******
Taki Panayotakos, the Executive chef of EAST Hong Kong grew up in Australia in a Greek household. When he’s not behind the stoves or creating new dishes, Taki’s out skydiving and doing photography. His culinary career has taken him all over the world from the Middle East to Fiji and Asia, and his cooking philosophy remains–simple food done well.

Tell us a little about the idea behind the dishes
I would say it is “simple food done well” by using seasonal and fresh ingredients sourced from local farms as much as possible.

You suggestions on cooking for in flight menus
I’ve pan fried sole with fresh salsa with lots of citrus and herbs to give that fresh healthy kick. The trick is to keep allow all the natural flavours to shine, the citrus and herbs keep the flavours fresh, with a feel of the Mediterranean.

Tell us about the choice of vegetables / cuts of meat you chose
Personally I prefer beef chunks and cheeks slow cooked, as well as lamb shanks and shoulders cooked in their own juices, using the method of sous vide. The result is full flavoured meat that locks in the moisture.

Plating the inflight dishes to serve
As there are many dishes served inflight and each for different routes, long haul and short flight routes would entail different menus. The standard vegetables we use is broccoli, tomato, beans. For example, one dish we did was sole fish served with fresh herbs and a side of carrot and ginger puree.

Your thoughts on a gourmet meal 30,000 feet above sea level, is it possible?
Yes, it’s definitely possible. We’ve done private catering with limited kitchen equipment set up serving 4-5 course dinners. It’s important to manage expectations as the setting is completely different, but yes I would say it’s possible to serve good food on board.

The idea behind your dish

Miso pork belly is a play on a traditional way of preserving meat, fish and vegetables

Best tip on cooking this
We braise and grill it.

Tell us about the choice of vegetables / cuts of meat you chose as we know altitude and cabin pressure makes a difference to how well the food keeps and its appearance.
Pork belly was chosen as the food has to be reheated several times, and it retains its moisture throughout that process

Your thoughts on a gourmet meal 30,000 feet above sea level, is it possible?

The reality is, eating is an afterthought for traveling, but it provides a good distraction on long haul flights. Larger amounts of courses present something to think about rather than the fact that they should get up and stretch. With the everyday use of technology in the kitchen, eventually we will get to that point of having a similar meal in the sky, but the main thing always holding us back will be the lack of actual fire on board.