I’ve done my favourite Peking duck list, the last time I’ve checked returning regularly to Beijing since I left in 2011, they are all still good, and there’s a new kid on the block to have your duck – jujube wood roasted and spot on. 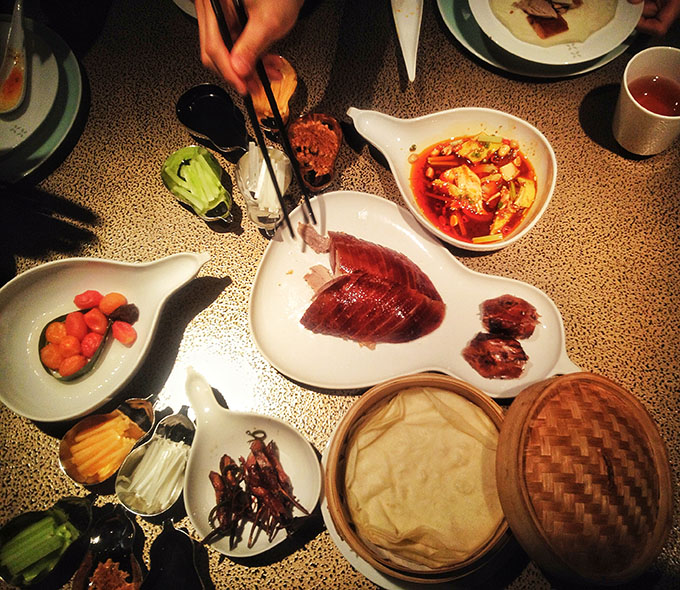 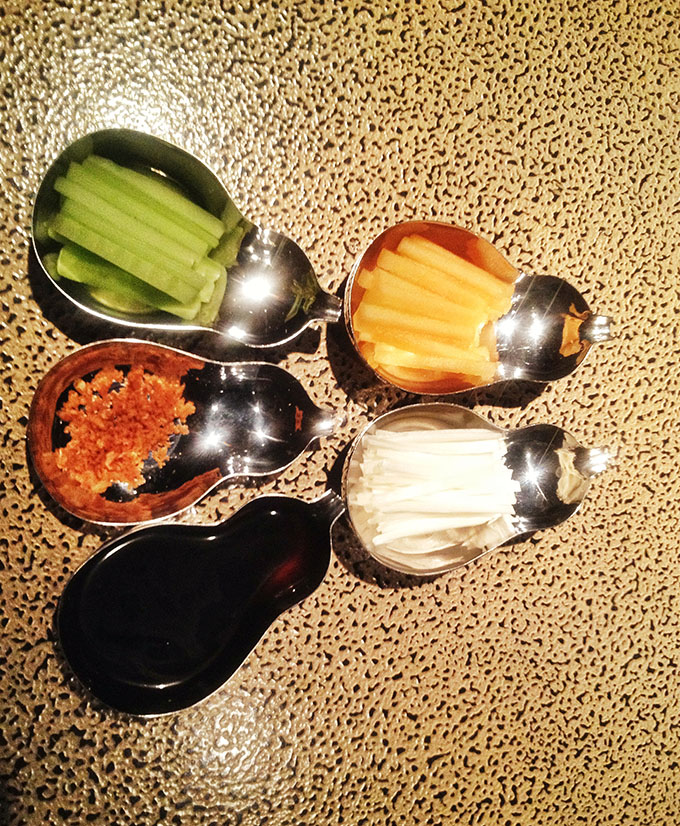 I finally got a chance to dine at Jing Yaa Tang since they opened earlier this year. Alan Yau of London Michelin starred Hakkasan and more recently Yauatcha fame was brought in to consult on this Beijing outfit to take some of the Peking duck share in the market. Beijing native chef Li Dong heads up the team here and draws you in with the local and regional Chinese dishes.

I’ve had duck roasted and smoked many ways from cherry to apple wood, but here it’s done with jujube (red dates) wood – a new twist. The duck here hits the spot, in fact it’s probably worth coming just for the duck. The rice flour pancakes soft, thin and so fluffy you’d want to use it as a face mask and eat it after. Chef Dong Li also spices things up a little with honey lemon in the condiments mix that came in cute little silver gourd dishes and a delish homemade hoisin sauce that perfectly complements the acidity and sweetness of spring onions, julienne melon and cucumbers. 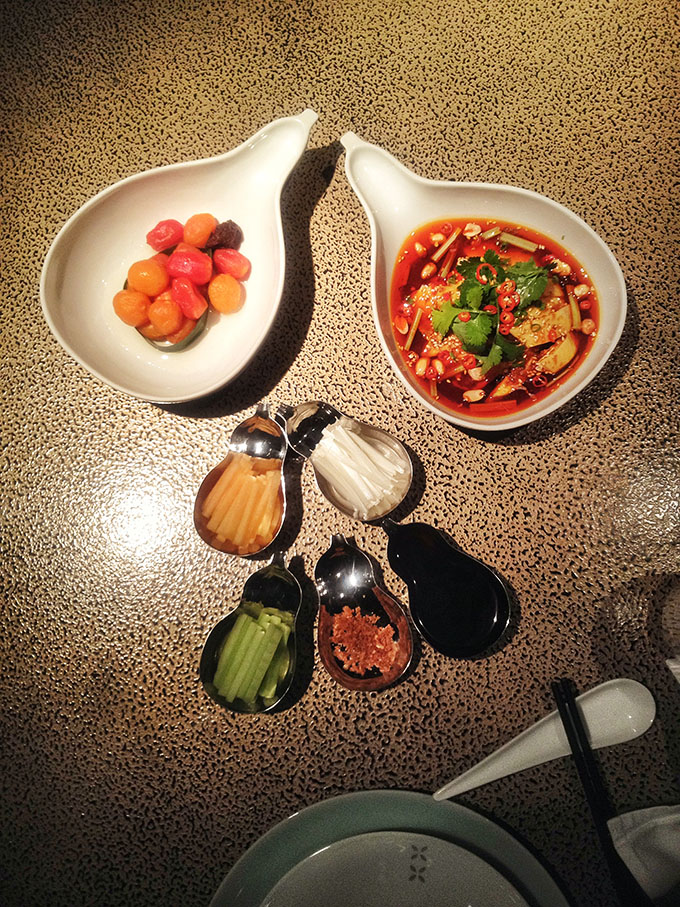 Crispy tasty duck tongues came as compliments from the chef and while I’m not a fan of eating random animal parts, these tasted pretty good. 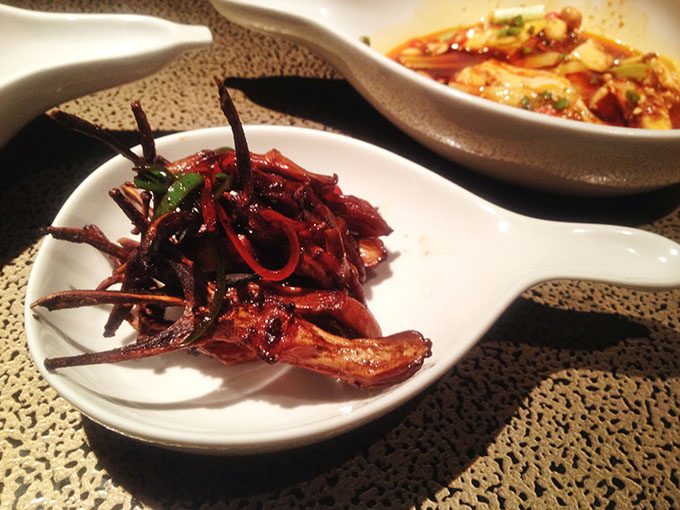 The menu here is contemporary and simple, with a range of dishes from Sichuan to the regional South all at surprisingly very fair prices. Dishes start from RMB38, with most ranging between RMB68 to RMB188, with a selection of finer dishes like blu lobster that start at RMB700+. We had slightly overcooked prawns with string beans wrapped round, minced pork wrapped in beancurd skin which were good homestyled cooking, but it’s really the Peking duck that shines here. 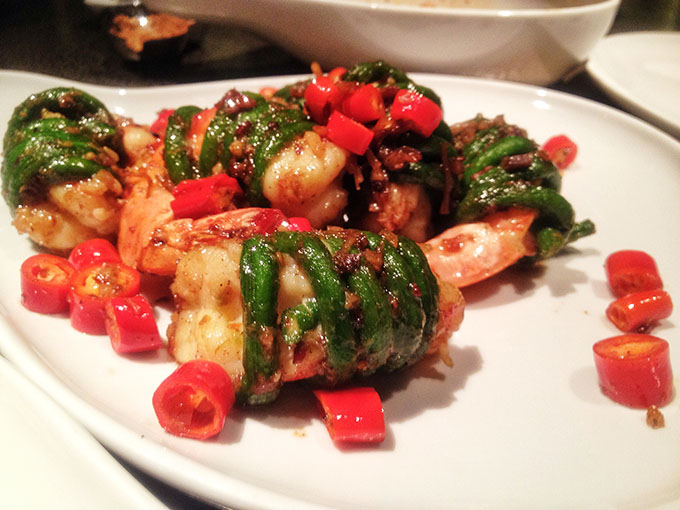 If you’ve been a regular of the hotel’s LG floor, you might recall the former bar PUNK and the private dining rooms, the space has been converted into an open restaurant space with a specially fitted wood fired oven. While the interiors are nothing to write home about, it’s the little details that count – beautiful sets of gourde plates in all shapes and sizes by Taiwanese design studio JIA, custom made beautifully shaped chairs designed in Paris, made locally, that comfortably hug your bum and a beautifully textured table that gets covered by table cloth at dinner. 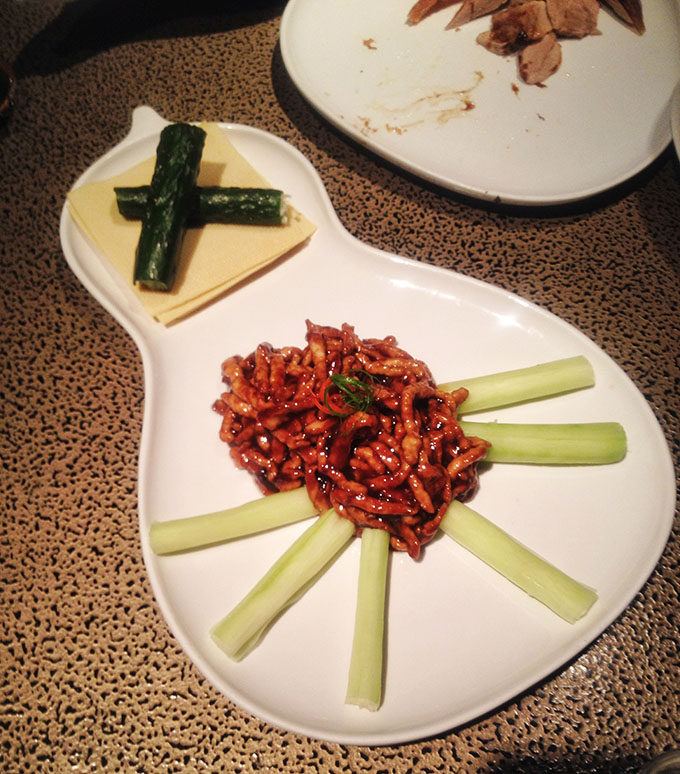 Apart from ordering a whole duck – yes do that even if you’re dining as two, I’d recommend ordering the mushroom consommé, the Sichuan chicken 口水鸡, and Beijing chef Li Dong’s twist to the Taiwanese “Three cups” recipe replacing chicken with cod cooked a perfect med rare when served as it continues to sizzle in the intoxicating fragrance of the three primary ingredients of sesame oil, Chinese rice wine, and soy sauce garnished with fresh basil leaves. 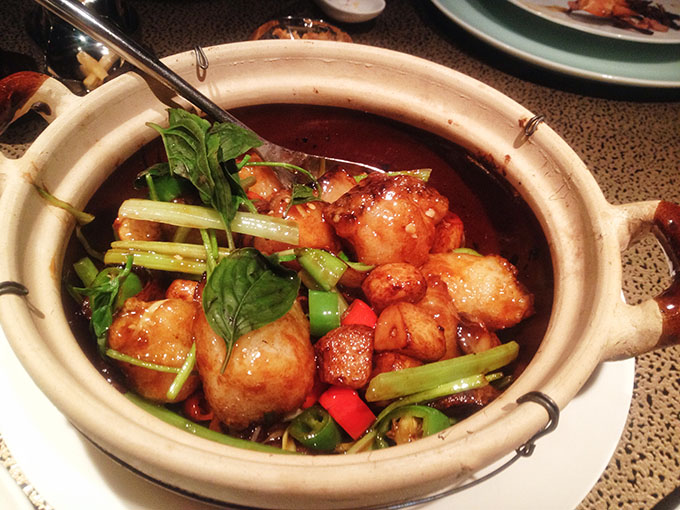 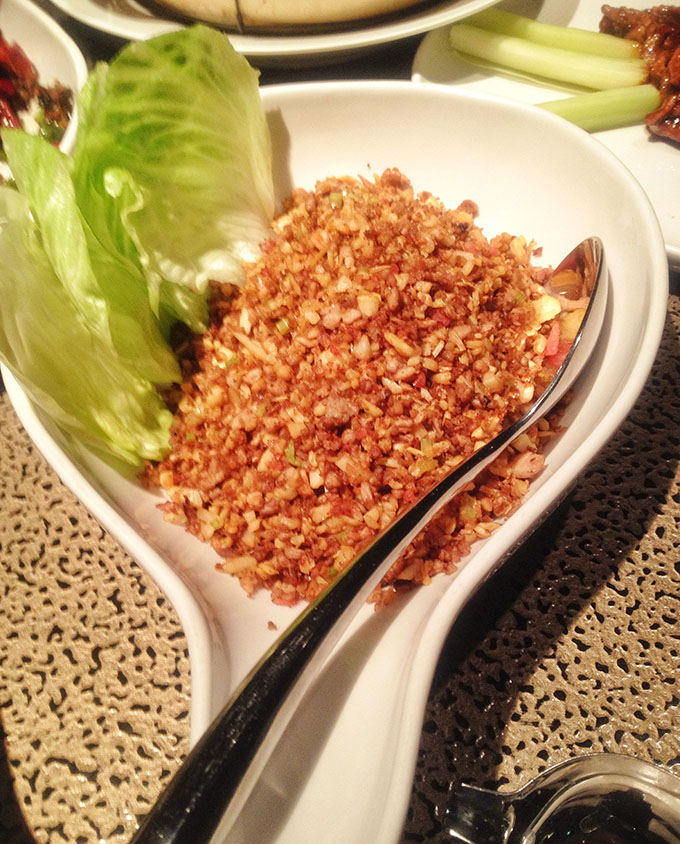 Most restaurants turn the rest of the duck into a consommé or give you the bare bones to take home so you can make your own soup. Over here, they serve it up with fresh lettuce and crispy bits. The next best thing to finish it is to take the leftovers home and make a fried rice!

If you’re tried of Duck de Chine and want another option out of Da Dong, go to Jing Yaa Tang. They also open for lunch here, a welcome addition to the Sanlitun lunch scene.