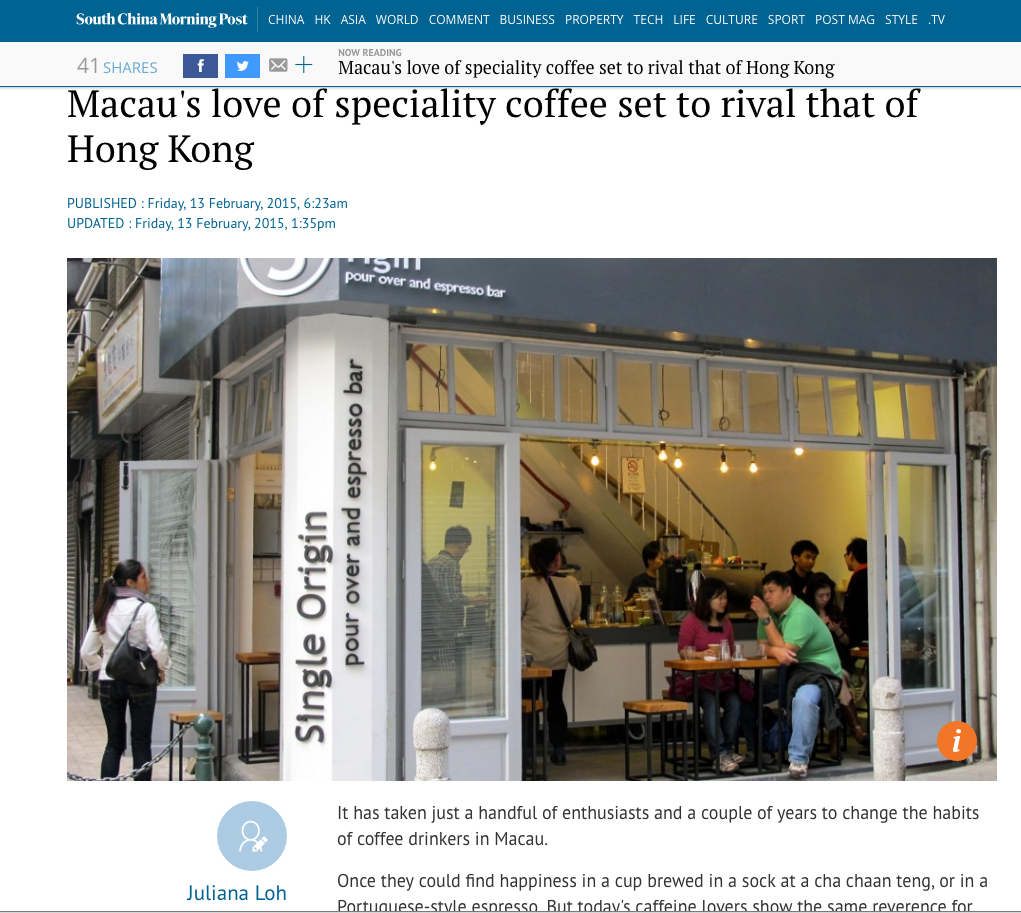 Here’s the original piece I wrote for the SCMP Life section.

Hot on the heels of Hong Kong’s trendy cafés and speciality brews, Macau has an underground coffee culture scene that started taking shape the last two years.  While there was never a coffee appreciation culture to speak of, the cha chan tengs (local diners) have always served black coffee often brewed in socks along side the traditional milk tea or Portuguese cafes serving strong espressos.  It was fast, cheap and aromatic, fulfilling one’s daily caffeine fix, but coffee beans were never revered or given the same respect as speciality coffee bars that have started sprung up in Macau.

With the rise of the new coffee culture – focus shifts to the provenance of coffee beans and how they were farmed, roasting and the process of making a coffee complete with fancy chemist like apparatus along with very detailed exact steps and temperatures on how to brew your coffee.

“Baristas have evolved from their traditional roles behind the scenes making coffee into the equivalent of a mixologist, demonstrating their showmanship and interacting with guests ordering a coffee at these speciality coffee bars.” Says Keith Fong, one of the forerunners of the rise of this new coffee movement in Macau.

Fong roasts his own beans and supplies Single Origin beans to other speciality coffee places in Macau in this tight little network. As a certified trainer, he also set up the SCAE (Speciality Coffee Association of Europe) in Macau where local entrepreneurs take the industry specific courses and certification as baristas – many of whom went on to set up their own coffee bar in Macau.

Fong was a computer science graduate in Macau and didn’t have any formative training in the hospitality field. In 2010, he travelled extensively through Europe, spending time in Stockholm, Vienna and the UK learning about coffee, with the intention to bring the coffee training system to Macau. Fong runs two speciality coffee joints: Single Origin and Communal Table with a third project on its way where he will be doing all roasting on the spot, conducting workshops, tastings with a coffee bar serving speciality coffee.

“We saw an opportunity here and brought the whole coffee training system here. This is the beginning of our coffee company in 2010. I was trained and certified in Europe and wanted to bring this back to Macau because no one else was doing this and there was a gap to fill in the market. While not new, it’s only over the last decade, people are really making speciality coffee an industry.” Says Fong.

“With speciality coffee, we are tasting the true flavours of the coffee beans itself. To make this happen in Macau, we have to start with the supply chain, from having the right green beans, the roaster and then the process of brewing. We started from training because we felt that in the market we don’t have qualified baristas in the know and we also wanted to up the standards in Macau market. This led us to the beginning of our company and the SCAE certification programme – probably the fastest way to learn all about speciality coffee.” Fong on the humble origins of his idea and changing the way people see coffee in Macau.

While 90% of Fong’s customers are locals, many are still on the learning curve to experience and appreciate the different coffees he serves and increasingly he gets more discerning group which is heartening for him since bringing speciality coffee culture to Macau five years ago.

American Jeremy Souders and a long time Macau resident is the organiser of the Macau Coffee Meetup Group where he shares his knowledge on roasting, Single Origin coffee and brewing a good coffee, filling the gap in knowledge in both the local and expat community. Sounders took his first class in Vienna in 2012 with Fong when they flew in for the World’s Brewer’s Cup Championship.

Fong had just started the SCAE certification programme in Macau and Souders continued his barista classes in Hong Kong, Macau, Vienna and in London. At the London coffee festival, he received the authorised SCAE training certification (AST). “Literally four years ago there was no coffee culture here, it’s emerged and erupted like a volcano.” Says Sounders on the birth of coffee culture in Macau.

At Terra, Kenny Lok runs a speciality coffee bar and likewise trained with Fong. Local Gabriel Yung, while having his coffee shared that he also trained with Fong as barista, is working on a soon to be open project this Spring.

Yung was keen to add, “15-20 years ago we didn’t have a coffee culture, and people were not interested in the source of their food or drinks and certainly didn’t appreciate coffee the same way the culture has changed today. The focus for coffee is on the bean, not the beverage itself. And speciality coffee is about the way it is prepared.”

Tucked away on Rua Dos Artilheiros, 26-year-old Domingos Cheong owns and runs Café Philo – his own “slow coffee and espresso bar” that opened March last year. Cheong first got introduced to Taiwanese speciality coffee in Macau, then went on for training in Taiwan and then took courses under Fong and got his SCAE certification. He started off with his speciality coffee booth in Tap Seac Square during the food fairs. This saw great success, giving him the idea to set up his own shop. Gutting out an old cha chaan teng local diner space, the industrial chic minimalist space plays vinyls and serves a great Singaporean kueh lapis and Pandan chiffon cake alongside his Single Origin coffees.

Probably the only coffee spot taking its brew seriously in Taipa Village is Fong Da. This corner shop carries Single Origin beans, roasts them on the spot but don’t fall into the category of speciality coffee.

Souders explains “Fong Da is another animal on its own. They roast their own beans but don’t roast them speciality coffee style and not all their beans are speciality grade. They are darker roasts, more traditional – Taiwanese style. Speciality is about the roast that brings up the best of the beans. The older generation roasts are robust, which a lot more people prefer. Also, the coffee is brewed the traditional Taiwanese way, siphoned coffee.”

Well, regardless of the pedigree of speciality coffee, the underground coffee scene in Macau has taken off, and found mostly through word of mouth. Now, one doesn’t have to contend with drinking mass market capitalist coffee or local roasted to death beans – a real reason to rejoice that there is now variety and plenty of choices as well as the opportunity to learn more about coffee where it’s given the same kind of reverence oenophiles give to wines.