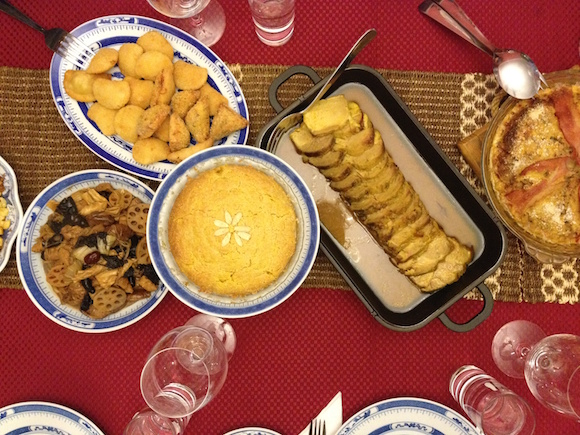 Here’s my piece in full length and the shortened version on Cha Gordo on the SCMP here.

Chá-Gordo translates to “Fat Tea” from Portuguese and was a regular gourmand affair for big Macanese families to celebrate catholic holidays (carnevale, Easter and saints days), weddings, a baby’s Christening or birthdays. It has become a rare affair today as dining out is now the preferred way to celebrate.  The word “fat” lends also itself to Macanese food like Arroz Gordo – meaning Fat Rice – its way to describe a rich spread, and to the Macanese, “fat” equates to rich, which in turn translate to happiness. 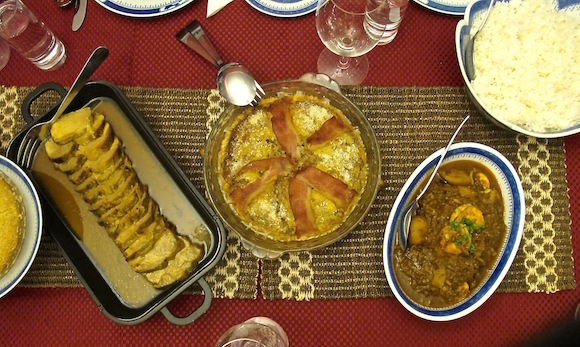 These delicious rich and heavy feasts – where the meal got its name used to take place in homes of the rich Macanese families with big kitchens in their houses and a team of servants dedicated to cooking.  The Macanese religiously celebrated Catholic and Christian holidays with a feast and at the time there was no habit to dine outside the home with very few restaurants in Macau, so people took to gathering at each other’s homes, often within the family, usually a sibling our cousin’s homes where parties are hosted.

When nuclear families of nine to ten children got smaller and people started moving to smaller apartments from the 1950s, Chá-Gordo gatherings then started taking place at the now defunct Tennis Club and Macau Club. They were the equivalent of country clubs for wealthy families to gather over leisure time.

Unfortunately, with smaller homes and no more country clubs, there currently is no longer a place to experience an authentic Chá-Gordo in Macau, and the Confraria Gastronomia Macaense – an association whose raison d’etre is to preserve Macanese culture, works on keeping the culture alive with their annual event. 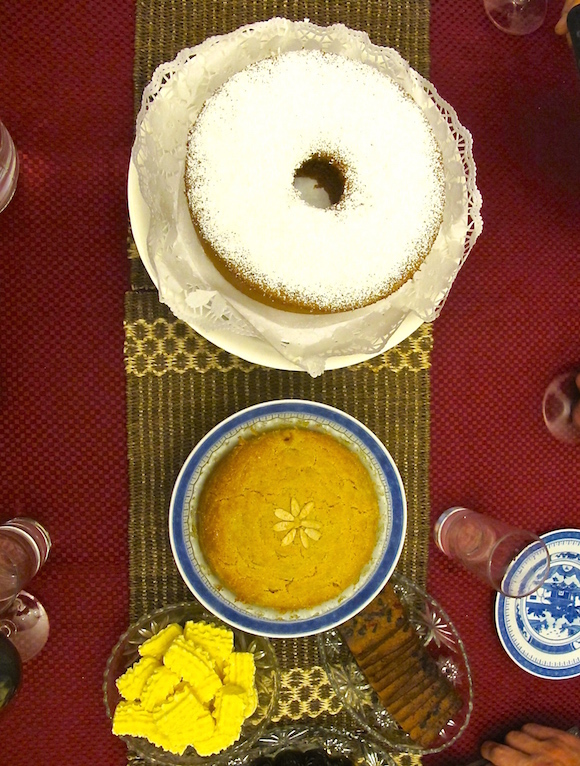 As Macanese cuisine sprung from the kitchen of homes, there has been an increasing need for preservation of recipes. The best Macanese restaurants in town – no surprise – is run by cooks that used to work at the Macau Club, with the exception of Dona Manuela. The three grande dames of authentic Macanese cuisine – Dona Manuela of Restuarante Litorial, Dona Vitória at APOMAC and dona Aida Jesus of Riquexó. 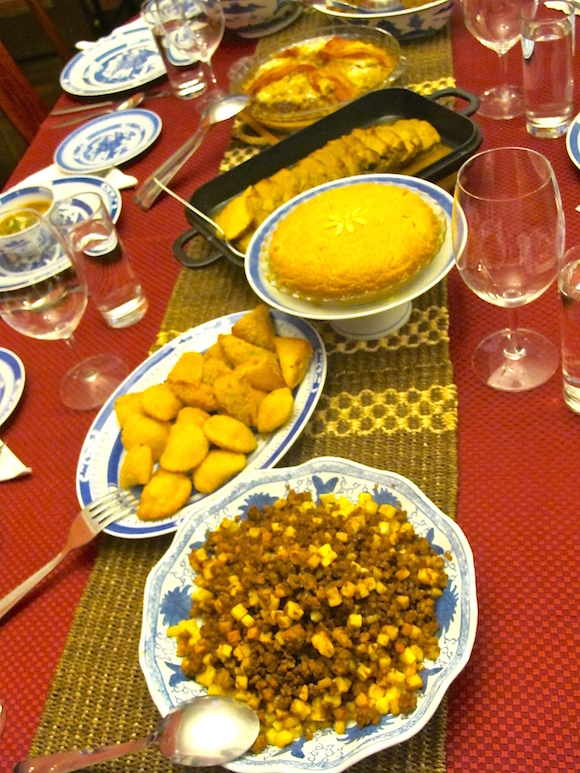 While most people make references to Chá-Gordo as a very late dimsum brunch or the British High Tea, it couldn’t be further from the association. Machado shares that “It was mainly out of practical reasons. As there were often many children gathered together at home and an early start for dinner at 4-5pm meant that they children could eat and be put to bed, while the adults could stay up all night to chat and dance the night away without having to worry about taking care of the children.”

“Chá-Gordo has nothing to do with the British high tea or dimsum brunch at all, although historically, it was in fact a Portuguese Queen Catherine of Braganza who married King Charles II and introduced tea drinking to the British in the 15th century. Tea was a one of the Portuguese’s main trading commodities, particularly Ceylonese and Chinese tea. The Queen was known to ask for a cup of tea in place of ale. “ adds Machado. 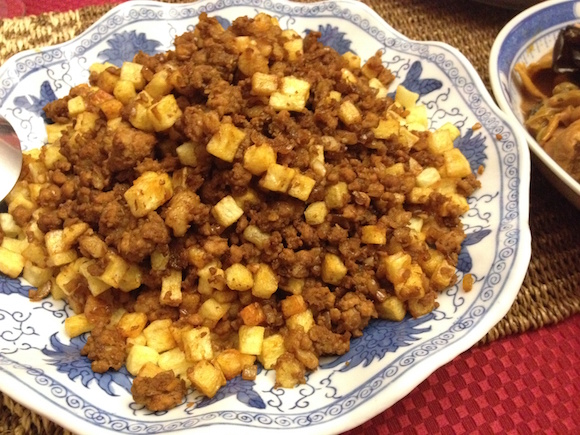 Chá-Gordo is a rich spread of finger foods, cakes and signature Macanese dishes like laccasa (a variation of the Malaysian Singaporean Laksa dish) and Minchi – minced meat cooked with diced and deep fried potatoes and three types of soy sauce (its name derived from the English word ‘minced’. Other main dishes include “Fat Rice” 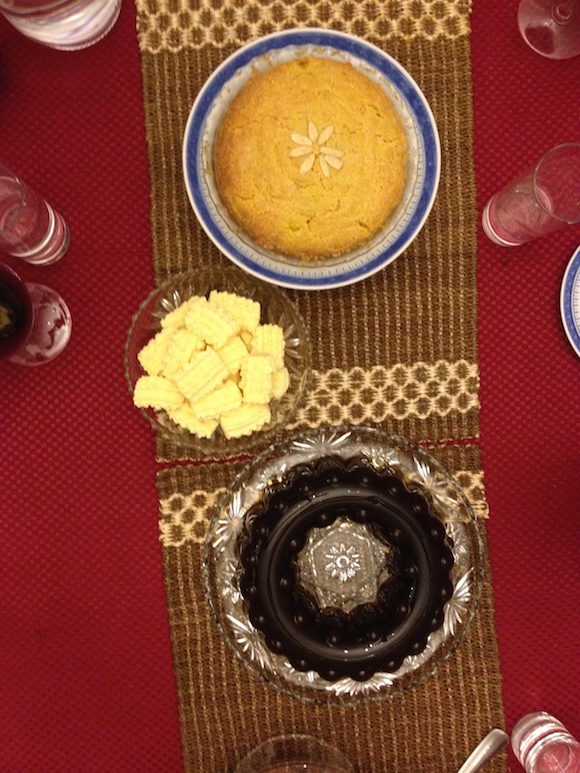 arroz gordo that includes rice and a slew of meaty ingredients, a large assortment of cakes, including the bolo menino – meaning little boy’s cake. This cake is only found in Macau and not in Portugal or Brazil, little is known about the origin of its name. Mango mousse and Batatada (a cake made of sweet potato or yam) are also key items on the dessert menu.

Alongside these ‘tapas’ like foods, the spread includes rice, noodles, giblets and tripe, stuffed buns, angel sole fish and a slew of delicious desserts that reflect the complex and rich culinary identity of Macanese cuisine that draws from Portuguese, Indian, Malay and Chinese influences.

Chá-Gordo, while a Portuguese expression, is innately Macanese. The Portuguese equivalent for celebrations is copo de água – that translates to “cup of water” for post wedding and christening celebrations – a modest expression to celebrate with food and drinks, without any rich feast implications.

The Confraria Gastronomia Macaense (CGM) is an association founded in 2007, its mission to preserve and promote what is Macanese cuisine, the Patoi language and the dying traditions. Chef Florita Alves, an avid cook and member of CGM has represented Macau in London and participates in Macanese culinary promotions to help preserve the culinary roots and is part of the group of ladies helping with Cha-Gordo on April 11.

On the CGM role, Machado adds “it is very important because as religion, the food and the language patois are the three main components that support our culture and identity as Macanese which is slowly eroding away with time. And we are trying to keep all this alive, which is difficult, but we are trying.”

Photo updates from the event itself here. :) What a feast!