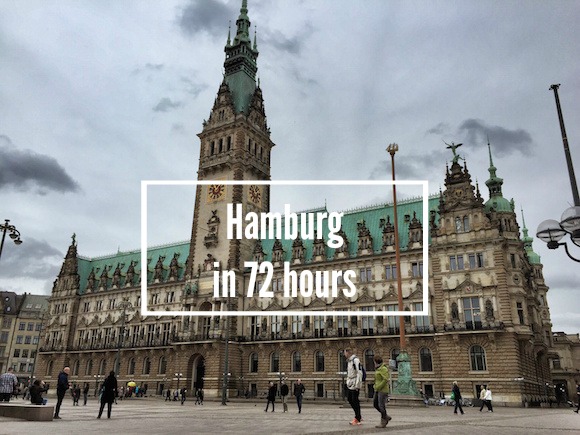 I had a about 72 hours in Hamburg to check out the city – which was cold, windy but gorgeous nonetheless. I did European history for my GCE ‘A’ levels but haven’t visited the North of Germany where alot of the World War II bombings took place and the heavy pieces of history are all over the city of Hamburg. I highly recommend the Hamburg free walking tour (pay what you want) – a really in-depth and insightful history walk across the city by foot. Our Spanish guide Adrian spoke perfect English and quite obviously a historian or academic as he knew everything about the city at the back of his hands. They on for nearly 4 hours so if you have made lunch plans (like I always do in the limited time), I didn’t end up finishing the full walking tour.

Part of this tour includes visiting the church where J.S Bach first played his Fugue in E minor on this pipe organ, a sombre piece composed shortly after his wife died. 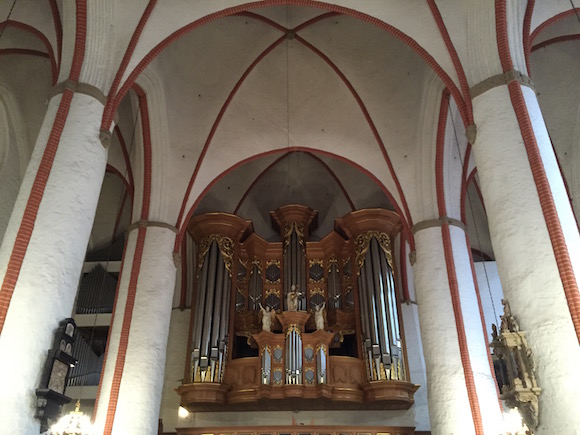 Germany is a strange and special place in my heart and it felt like coming full circle, my first love and relationship was with a half German from the South, and I am reminded how the nationality stereotypes, inflexibility and efficiency runs throughout the country and nation. Both good and bad, which made me a little nostalgic, but also to stock take on how far I’ve grown up from my angsty wide eyed wandering early 20s self. 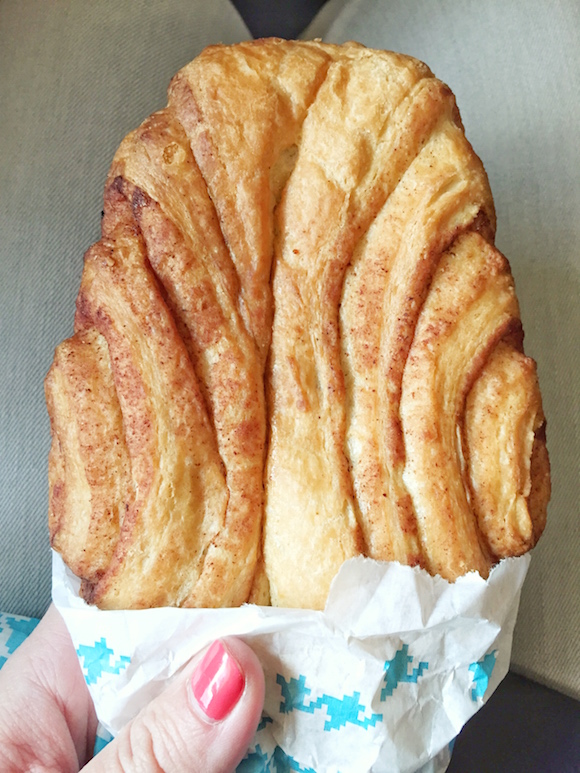 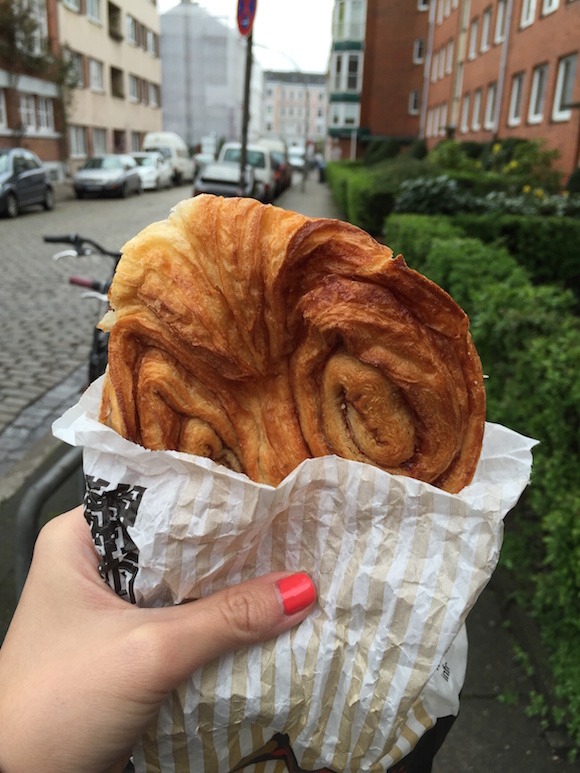 First of, you MUST start your day with a typical Hamburg breafast which is this hybrid of croissant and cinnamon bun without being too sweet at all. Skip the chain bakeries and go to a really local neighbourhood bakery and go early in the morning to grab one, or two. 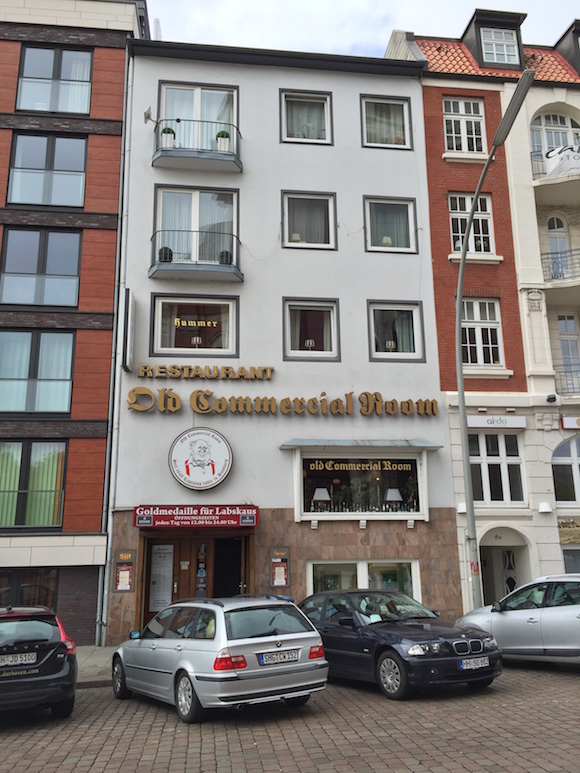 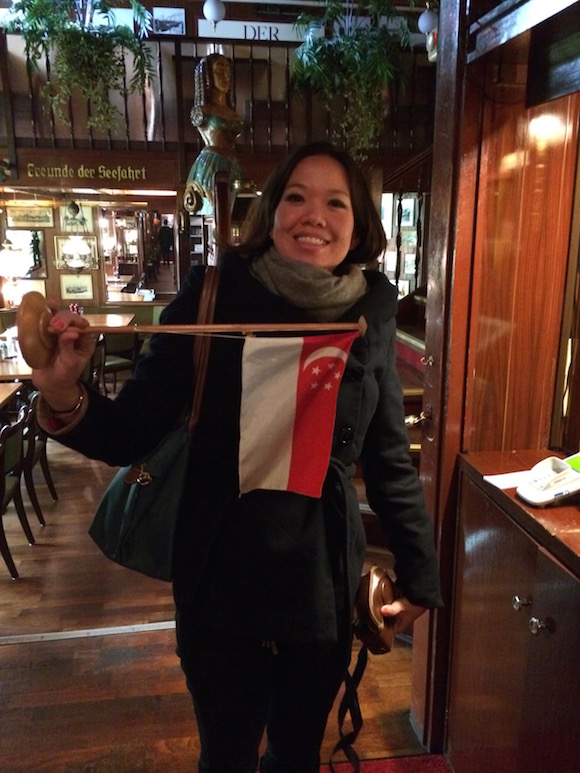 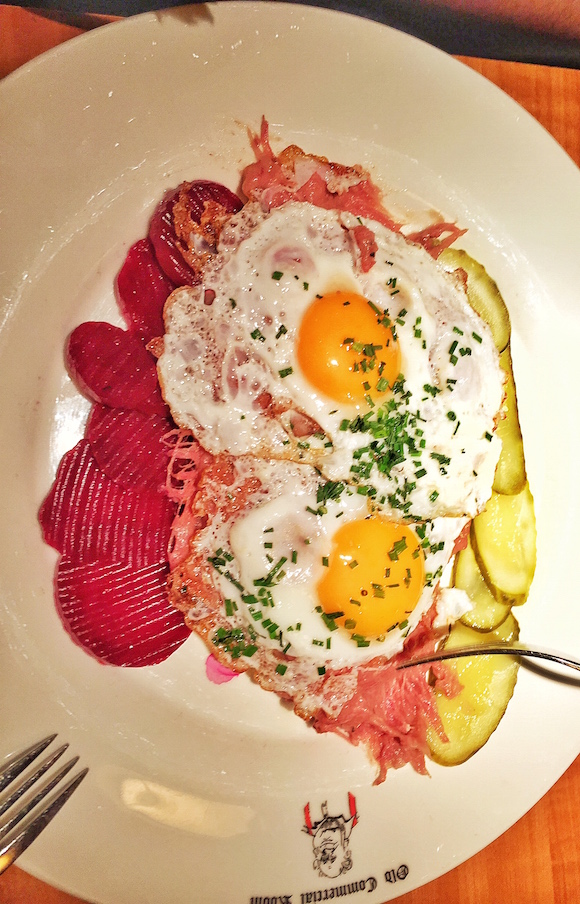 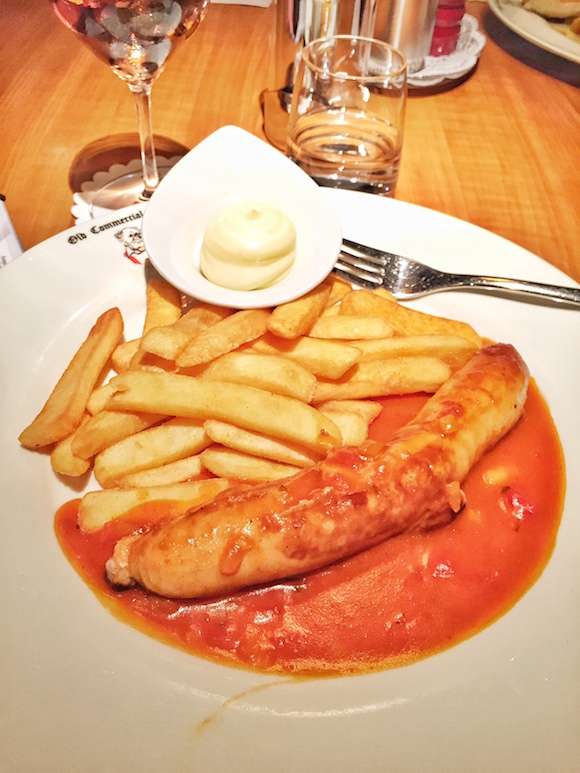 A good pit stop from your sightseeing walk around Michel in Hamburg, head to the Old Commercial Room for some North German traditional food called Labskaus – the traditional food for sailors, a mish mash of meats and stuff that doesn’t look appetising at all, but very tasty and interesting. I highly recommend it. The restaurant’s wooden interiors resemble an old ship cabin, vintage photographs of I assume old patrons, sailors young and old are all over the wall as well as international flags. I have always found boats, history of trade and migration fascinating since it happened right in my own backyard, Singapore was a migrant nation as an island country and my Mother’s own grandfather was a Javanese ship captain sailing those very spice trade routes and barely came home. In fact our guide told us that Hamburg is the world’s third largest trading port behind Singapore and New York (purported one of the largest harbours in the world) and all imports to Europe has to pass through Hamburg – and coffee as a commodity is huge in Hamburg – which explains the great coffee culture where cafés have their own roasters. 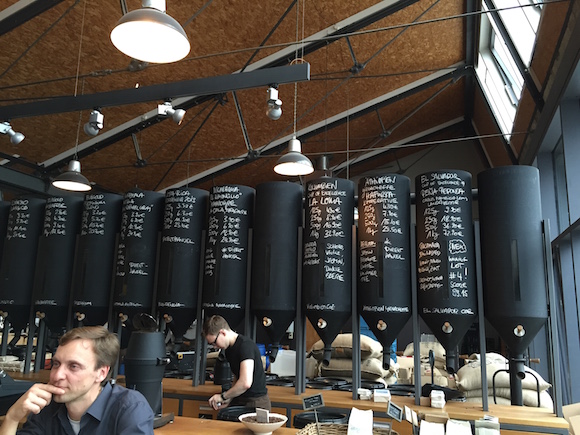 A great café my German friend recommended is Elbgold, bustling busy with chatter, industrial chic interiors and their own roasters in the back. If you have time, and on the Lagerstrasse street, make dinner plans at Bullerei, a restaurant run by Tim Maelzer who is basically the German Jamie Oliver.

I didn’t spend a Sunday in Hamburg, but if you do, don’t miss Hamburg’s answer to Tokyo’s Tsukiji fish market:  open on Sunday mornings from 5 to 9:30 am only.

The romantic idea of this place is that it’s been busy since 1703 and also vintage junk and treasures to be found at the market.

I stayed near Antona and a short bicycle ride to the beach Elbstrand (Elb by the way is one of the rivers that run through Hamburg) where there are burger joints and BBQs. It rained the two days I was there, so no beach for me unfortunately.

Speicherstadt is the old historic area where trading happened in the past. Gorgeous architecture, green copper topped roofs and and boat tours through the canals. Start at the subway station is called: Landungsbruecken. 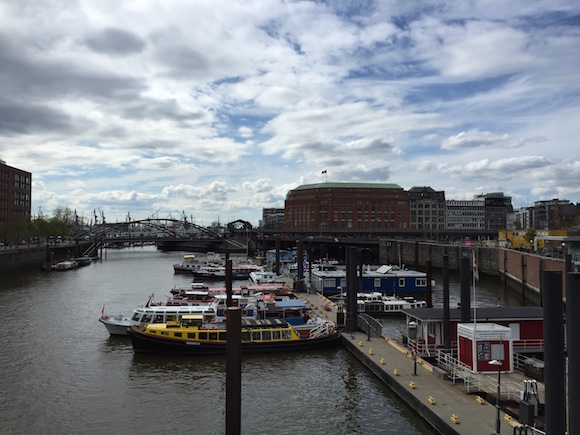 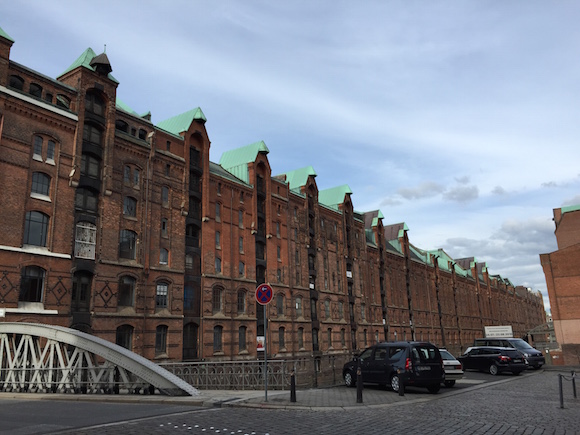 There are a couple of museums in the city which my German friends recommended and the shows all seemed amazing – too little time, too much to do.

* Deichtorhallen, just behind is Haus of Photographie
* Kulturgold Sichtbar
* Museum fuer Kund und Gewerbe
* A bit outside but Museum fuer Bergedorf und die Vierlande
And our highlight has to be the Minatur Wunderland – the museum world of miniatures in the smallest most amazing details unbelievable to man! 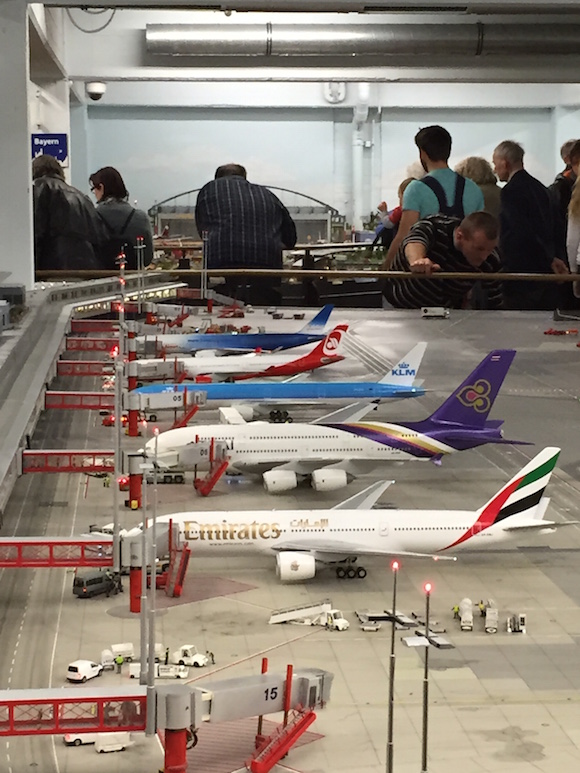 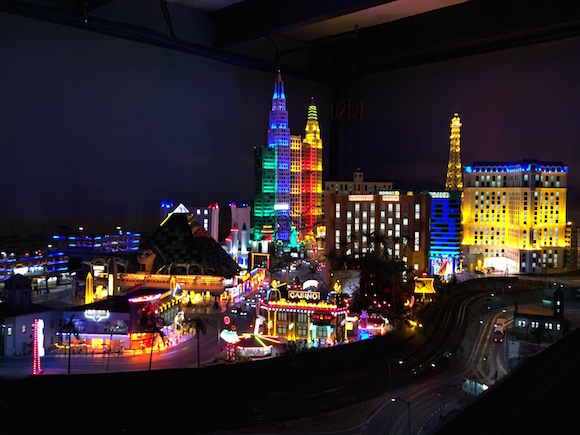 Finally, the architecture in the city is interesting – Germany is relatively young as a European nation since unification only took place in 1871, so many styles were copied from it’s European counterparts and post-war destruction and rebuilding of the city allowed for many different styles to exist side by side, juxtaposed with a little art deco and red brick expressionism, stern bauhaus style buildings as well as buildings that reflect the sombre, formal tones of Nazi era (although far more so in Berlin buildings).
Had several disappointing dinners so unfortunately unable to recommend some great places to dine. 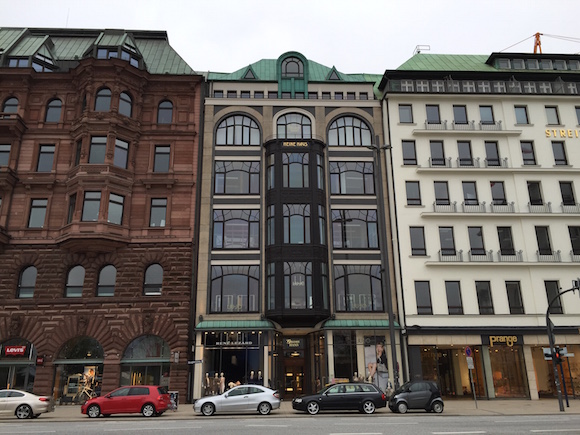