Married to a chef: Victories, Trials and Tribulations 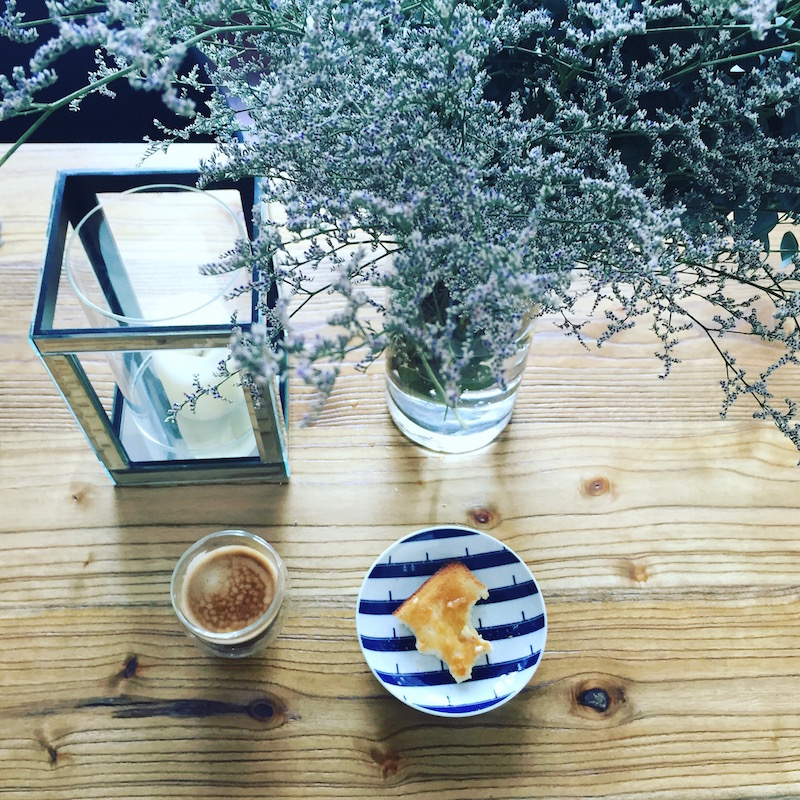 Usually, table for one.

I couldn’t be more happy and proud of my man who has reached the next level towards the culinary holy grail of two Michelin stars, after gaining the first within 8 months after opening his eponymous restaurant, working so hard and motivating the team to tirelessly put in 200% to maintain it for three years in a row after and on Thursday, picking up the well-deserved second star for the Michelin Guide Hong Kong & Macau 2016.

Congratulations to my husband and to the team, they all truly deserve it! Bravo to the kitchen team who tirelessly work so hard under the creative vision of the husband, most of them leaving family, girlfriends, wives behind in another country to pursue this culinary passion – or the front of house staff – some commuting daily from China, their families living across the  border, showing up at work and giving it their all and then making the long commute back through immigration customs to get back home – daily.

I get teary eyed when I think about it, it’s very admirable, and a conscious choice to do what they wake up to do everyday. It isn’t easy – but they show up everyday at work rain, typhoon or shine. I am grateful for the husband’s great team both in and out of the kitchen. When I used to commute every weekend from Hong Kong, that was exhausting enough battling the crowds, I clearly don’t have the same kind of resilience.

We all know that the service industry is not an easy one, so the strength and commitment behind everything they do is laudable! One of my best friends in Beijing called me out on my congratulatory post and how I had to steal part of the limelight of my husband’s glory about giving myself a pat on the back too. I was very conscious and very aware of posting it, which led me to this blog post for discussion. 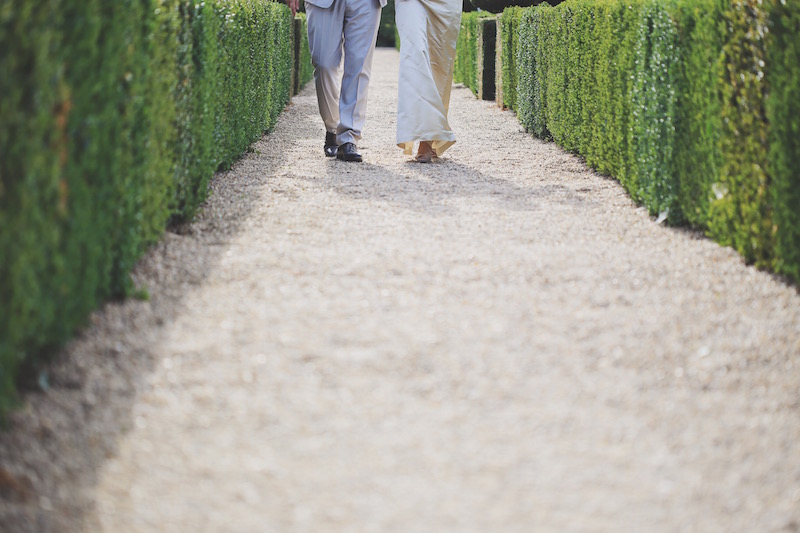 Trailing spouses are always left in the dark, their compromises never acknowledged and it’s almost as if society dictates that it has to be that way. It doesn’t matter if I am often invisible in public as only he gets greeted, I could meet a person for the 50th time and he/she would still pretend they have never met me before while grabbing my husband for a long friendly cheery chat.

I find it so terribly ironic because excellent service is synonymous with personalised service, a good maitre d’ recognises a regular guest by name instantly, so I don’t understand why there are the few that would repeatedly pretend we’ve never met. That of course boils down to bad manners, but it’s also the way of the world.

The feelings and lives of trailing spouses don’t matter in the grand scheme of things. But yes, they do.

Insecurities and what not? Everyone has them and my self validation is important to me. While I love being on my own and have backpacked Europe myself for weeks more than once and also take short vacations alone, I don’t have many friends here, and it takes on a different form of loneliness.

I gave up the life as I knew it and all the career opportunities that came with it to move to Macau and inherited the spouses of his friends – some of them would never be my friends in this lifetime if not for the circumstance.

Oh, it doesn’t matter – it is all about him. That’s a passive aggressive way to deal with it. So, instead I also choose to face it head on. It is also about me too, We are in this together, We are about equal partnership and We are in this for the long haul through the good, bad and the ugly.

I am taking one for the team for him to build his dreams pursuing the culinary holy grail. I am not asking for the noisy-look-at-me type of acknowledgement or fan fare like the extent of equal partnership and lots of praise the way Mark Zuckerburg does for his wife Priscilla -where she clearly exists as an equal partner. Most trailing spouses don’t. Not sure how the trailing men feel!

Could it just be Macao? Some countries sit with you better than others in relocations. I am not a victim, I made a conscious decision and chose to come live here to nurture and support the dreams of my husband.

A trailing spouse wrote an International love letter on the alienation and loneliness of relocation that probably resonates with many. I have moved several countries on my own, learnt the language(s) and enjoyed navigating the system, after a while it’s clockwork. However, with all these life skills and experiences, unfortunately none of it prepared me for a life in Macao. If you’re looking for some direction, I found Sundae’s site and a course she’s offering insightful coaching through the dark and uncertain times as you look for yourself as it often gets lost in relocation and giving yourself up for the greater purpose and greater good – big picture. It’s never easy and she hits home some sensitive points.

I find it very unhealthy and archaic to impose on women not to give themselves a pat on the back too while admiring their husbands on the pedestal. Chefs have inarguably big egos because everything that they do and deliver culminates in their reputation and success and it is a long, hard road they are on.

But really, no one ever asks what’s it like for the wife because she is meant to exist in the shadows as a nameless person who is a plus one, while often times she holds the fort at home with the kids while trying to maintain her own sanity. I have met many other women fighting their own battles of lost of identity giving up their high flying careers and looking for some form of validation one way or another. Perhaps, my own lack of sense of self falls into the same category.

Whatever the case, we live and learn, live and let live, and I am sure life has so many more lessons I have to learn and someday maybe I’ll be able to let it all slide when people are rude and condescending on a regular basis. I am just happy and glad that my husband while sometimes oblivious to the snarly, mean spirited attacks, is here to walk the journey with me. Yes, I am always the more petty and dramatic one! ;)

Any stories good and bad to share as a trailing spouse and how you cope? Are you the silent lady living in the shadows being told “that’s what good supportive wives should do!” How dare you even think about making it about you, when it is about him, his achievements, success and sunshine while you’re suppose to, well stand in the shadow be proud, happy but non-existent – it is simply not your place. I don’t know about you, but I have a pretty healthy self esteem in my 30s and it still makes me indignant.

Finally, on a happy note, an obligatory photo of our Beijing rescue cat, Smudge hogging the bed. Some parts of Married to a chef life. 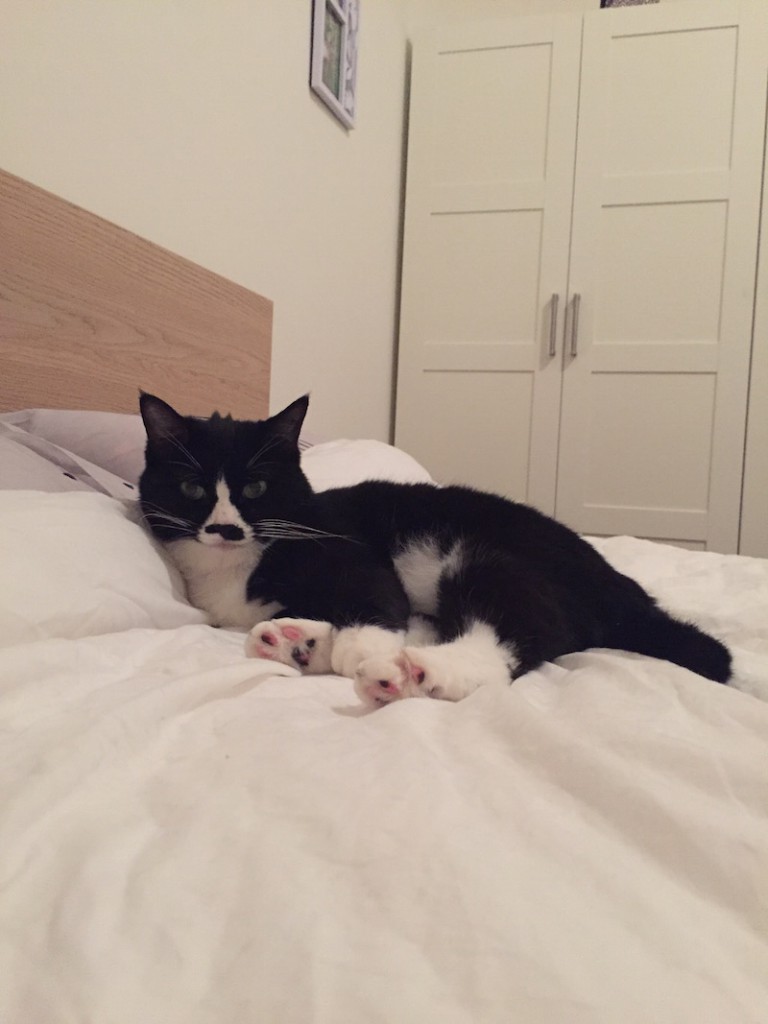 Are you on Instagram? Follow along for real time updates of latest Macau discoveries and other travel adventures.