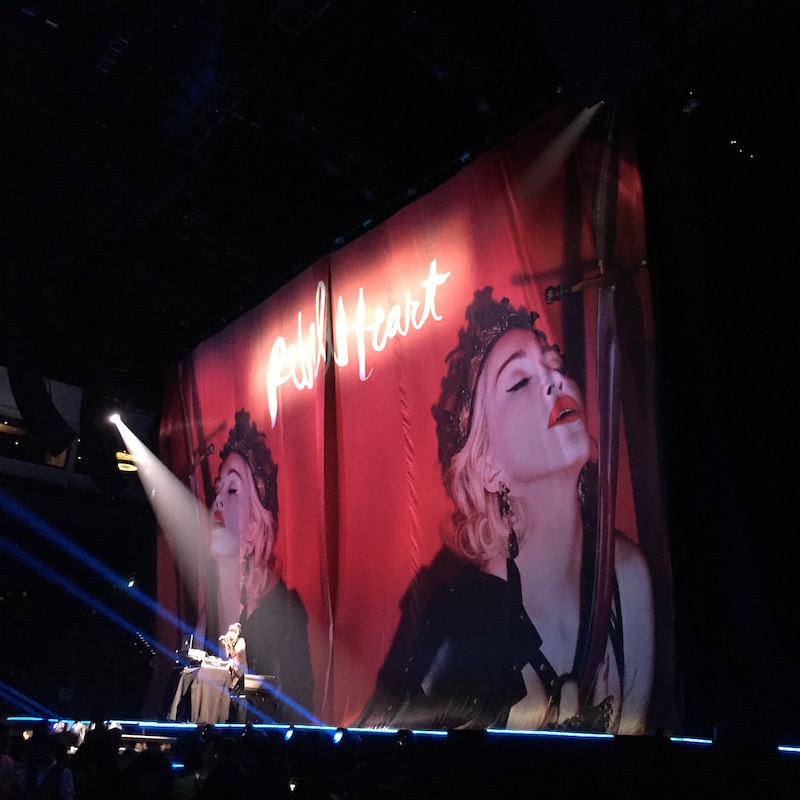 I am so grateful that the husband got last minute resale tickets to Madonna’s Rebel Heart Tour a couple of hours before Sunday’s performance in Studio City Macau  (intimate arena with great acoustics) at a quarter of the price. There were many people trying to sell off their tickets at the last minute and we suspect people were trying to make a profit by buying extra – but at the price of over 1000USD for a ticket, it is hard for the layman to justify paying that price.

Well, what can I say apart from the concert was BRILLIANT. I’ll spare you the adjectives and will not attempt to over-intellectualise it like an art/theatre/music critic does, but it was a visual, audio treat –  much more than a pop concert. It was the whole works of theatre, acrobatics, dance all in one.

The opening set here with a DJ and playing some Anita Mui tracks. There was also a man dressed as an Emperor while everyone was in leather and chains and burlesque type outfits. To everyone’s surprise, he was the only one invited onto the stage to dance along side the Queen of Pop. So moral of the story – be ethnic and out of theme costume!

I didn’t take any other photos nor videos as I consciously wanted to enjoy a live performance the way it should be – soaking it all up, not behind illuminated screens for bragging rights after. Everyone was recording it on their phones – but why pay a hefty sum to go to an amazing concert but not live in the moment of it all. Instead,  at least half the audience was watching it behind an illuminated screen because one could do exactly the same going on Youtube?

With all the noise being made by Singaporeans about how immoral she is and censorship kicking in, I am certain the audience will be way more fun than in Macau. We were not allowed to stand and dance, few were singing along and there were a lone few major fans.

If you’re going to the Rebel Heart concert, do yourself and Madonna a favour –  set your ipad/mobile phones aside and enjoy the LIVE concert, what would you do with the recordings anyway? The professionals are doing the recording and you can see it on Youtube after and remember everything so vividly because you were not hiding behind your screen.