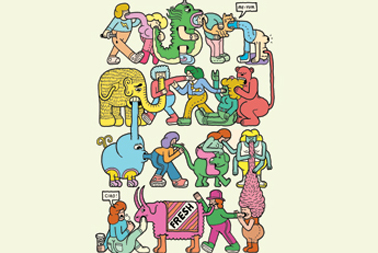 Like every child, he had a vast collection of rudimentary colouring books, but he preferred drawing lines and weird shapes to colour. He loved the freedom of creating his own spaces without boundaries, rather than having fixed shades to colour and shade.

He loved drawing lines because it never ended. It could go as far and long as he wanted, crooked or straight. Or he could press the nib of his blunt pencil hard against the surface and mark out little dots to connect them. Exactly like how the galaxy works, he thought. And all the funny shapes and patterns one could trace to form star constellations. For some reason, he could never make out the fabled scoop or signs of the horoscopes in the constellation, so he made up his own little shapes and animals instead, numbering them mentally in his head, imagining a giant invisible pencil connecting the dots across the velvety black sky.

He loved taking his lines on walks; they could go into crazy swirls, fixed shapes of squares, triangles or circles with a fixed destination; or it could just go straight on forever, born of a dot and ending with a dot. As a child, he would take a pen and draw all over himself, following the tributaries of veins that led to the core of his heart. Just like those Chinese medical charts that showed the internal view of the body with all its accupoints and nerve endings. The end result of his line drawings was always different, as he had chosen different veins to trace each time.

Growing up, he took his intrigue with lines further in life. He became an acupuncturist. This time, he found nerve endings and connected the nerve points with needles to treat the various ailments of people. Most of his patients had minor muscular pains; while some ladies went to him to keep their weight in check as he had discovered a method to suppress appetites by placing needles on the right nerves.

As he worked on the patients, he couldn’t help but to mentally connect the dots of the needles and make patterns and shapes with the lines they’d link up to. Lines are mysterious as they never really end, you can pick up from the same spot exactly where you left off.

For the first time, he was asked to treat a girl who was paralysed from her waist down. She had undergone infinite sessions of physiotherapy that proved futile. Her family decided to try acupuncture. The sessions were intense and he never wanted it to end as he had started to enjoy the challenge of ending her psychological pain of her paralysis. To him, it was like a puzzle waiting to be solved, he just had to get the linear composition of needles right.

She was an attractive young lady whose optimism towards life was almost unbearable. They started with small talk and casual conversations before she started to divulge her pain of fighting the thought that she’d never walk again. He grew to like her as they spent an increasing amount of time at their intimate one to one acupuncture sessions. His inability to help her regain mobility frustrated him terribly.

He felt an inexplicable sadness in heart as every session didn’t seem to improve her condition.

This time, he connected all the points of her nerve endings, marking out every single important pressure point before plugging it to the machine to run a low voltage current over it.

Whoever said that lines and linear patterns never end?