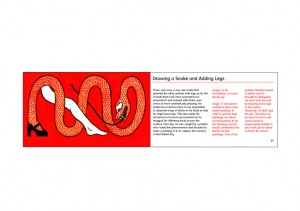 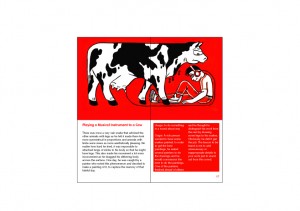 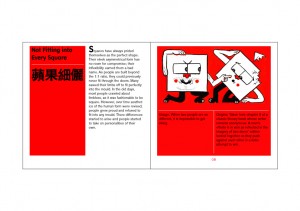 Exploring the broad meaning of Chinese idioms with the explanation of the literal and figurative meanings and how to use it in context. These corresponding short stories are inspired by the idioms in context and the historical background of each idiom is given a new twist.

Accompanying the text would be the literal translation of the Chinese characters by illustrations.

对牛弹琴—playing a musical instrument to a cow

To waste your time talking to someone who is unreasonable or unappreciative. Could also be used to ridicule someone who wastes his time on the wrong audience.

There was once a musician named Gongming Yi who was playing a flute when a cow nearby caught his eye. He decided to play some music to entertain the cow and started on a wonderful melody. However, the cow took no notice of him and continued to chew on the grass. He thought to himself “How can I expect the cow to appreciate such beautiful music?” He decided to make some noise with his flute instead, it was then the cow paid full attention to his performance.

Cows were once known as the most musical of the animal kingdom. They had excellent hearing abilities, detecting the highest decibels of sounds. Their udders produced different tones while they were milked, as they tapped gently along with their tails. Unfortunately, men were too inferior to realise this unique quality of their cows. People never thought about playing any musical instrument to cows as the animals were either too critical or chose to ignore the performer completely. In most cases, it is the latter.

格格不入—not fitting into every square

When two people are so different, it is impossible to get along.

This idiom is taken from chapter 8 of a classic literary book whose writer remains anonymous. A man’s futile effort is reflected in the imagery of two deers’ antlers locked together as they push against each other in a futile attempt to win.

Squares have always prided themselves as the perfect shape. Their sleek asymmetrical form has no room for compromise; their inflexibility earned them a bad name. As people are built beyond the 1:1 ratio, they could previously never fit through the doors. Many sawed their limbs off to fit perfectly into the mould. In the old days, most people crawled about limbless, as it was once fashionable to be square. However, over time aesthetics of the human form were revised, people grew proud and refused to fit into any mould. There, differences started to arise and people started to take on personalities of their own.

***********
Here are just some samples of the short stories with illustrations. If you’re interested in publishing our project, please contact me:
jloh [@] julianaloh.com