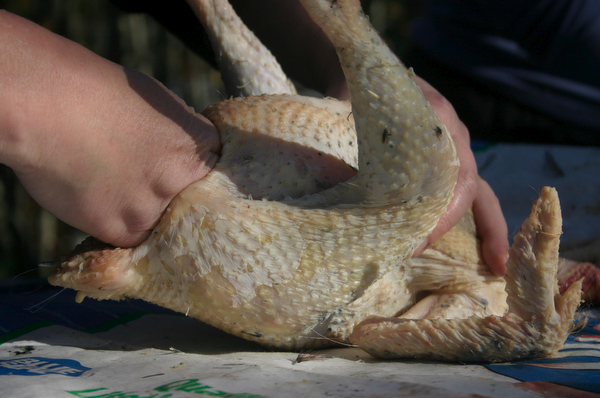 Image via Living with Goats

There are many ways to clean a piece of meat before we cook it; from taking out the ink pouch of fat succulent squids, to making a slit on the fish’s scaly underbelly to remove its organs, or cleaning out the insides of the chicken. He was very meticulous about these details. He took extreme care in executing his duties as a kitchen assistant in the hotel. Everyone was pleased with the way he worked, his attention to details and how he took upon the duty with much pride. He loved having a hand in the whole process of cooking meats, transforming them from raw cold cuts into gastronomical pleasures.

Little did they know what goes through his mind while he worked. His deft hands and the masterful rhythms he used to dig out the insides of these wet carcasses- cold to the touch, waiting to be cooked and eaten. He thought to himself, “this is probably as close as I get to necrophilia, but I don’t like dead people, nor animals. I just love the tactile sensation of cleaning things out thoroughly.” It’s like squeezing a pimple and finally having the resolve of making sure the root of it is out.

We’ve all read enough sick stories about men masturbating into hot apple pies, slit opened papayas and melons before putting them back in the fridge, pregnant with fluid. He had a different sort of psychological attachment for the food he cleaned out; we are what we eat and there was nothing wrong in someone going the extra mile, taking meticulous care, paying attention to every detail to each piece of meat, whole or dismembered. As he was the quickest and most efficient at meat cleaning duties, the rest of the kitchen staff left the meats up to him; and daily he cleaned out more than twenty kilograms of meat—much to his delight of course.

A chicken remained a chicken until it was cooked and takes on another form, like a culinary meat dish. Sometimes while he ate, he pieced together the dismembered pieces of meat like a child fixing a jigsaw. Deep down, he felt a sort of contentment, because he knew the whole process by heart and was glad to be the first in line of the kitchen factory, putting together culinary pieces of art.

He had a penchant for digging. The monotony of the action and the nagging sensation of keeping at an activity, his mind could never rest. He delved into the realms of his subconscious, he gave extra thought to every action or incident that personally involved him. Even in his dreams, he dreamt of rhythmic activities; at times, he was swimming the frontcrawl in an idyllic landscape with steady strokes, taking alternative breaths on his left and right, other times he was digging in the backyard, preparing to plant some seeds. And on days when he had wet dreams, he dream of either getting off on his own, or with strange women who had no faces. His obsessive ways manifested themselves physically in his work, like how he enjoyed immensely- cleaning cold meat.

First, he would plug the sink and flood it. This would prevent any escape of the animal’s innards that might clog the sink, while the pool of cold water facilitated the washing and cleaning. Salt helped make sure the meats were cleaned thoroughly and also remove the odours of the raw bloody chunks. Occasionally, when he forgot to adjust the temperature of the water, the meats cooked itself partially in the hot water, changing from red to greyish white, attached with white threads of nerves and tendons.

With the deft hands of a surgeon, he would make slices into the meat with his knife that he pretended was a scalpel. Gracefully, he took out the insides from the fish, or chicken, examining each organ; the heart, the liver and the bowels that the poor animal didn’t have time to empty before death.

He thought to himself, it must be awful dying when you’re full of wastes, but on the other hand, the poor animal might have had a good full meal before having to face death. Some animals excrete their wastes in their moments of death, from fear and panic of the unbearable pain. He often thought about how he’d die and had a great desire to recycle his organs so that he may give life to a terminally ill patient. Just like the Chinese eat animals’ innards as a delicacy, he felt the need to use and consume every part of the animal. He loved the rank smell of blood. It reeked of both life and death. He remembered watching his son coming through his ex-wife’s birth canal, a melting pot of different smells, overpowered by the musky rankness of blood. And his previous job at the abattoir reminded him of death. At times, when no one was looking, he would poke at the sad carcasses hanging from the giant metal hook. He thought about rebirth and reincarnation and wondered if he would suffer the consequences of being reborn a pig in his next life.

Sometimes, when he had a little more time for himself at home, he would remove the organs and then try to put them back in the exact same place. Like surgery, it was of paramount importance to replace every nerve, blood vessel and organ that he touched. It was like fixing a jigsaw, only better, and definitely much more challenging.

As he carefully cut the chicken into half with a pair of scissors, he imagined himself as a gynecologist, making that delicate slit on the vagina of a woman in labour. The precise sounds of cutting through the soft cartilage of something, alive and very human. He lived his surgical moments vicariously through the dead meats and got increasingly better at his ‘operations’. For as long as he can remember, he wanted to fix objects, he loved to sew and he was particular about cleanliness and order. After all, no one would trust a maverick doctor who didn’t look out for details.

When he was 5, he used to cut up his elder sister’s soft toys and attempted to sew them back; following meticulously, stitch by stitch the alignment of the original. He would hide under his blanket and with a little fluorescent lamp as he cut up the toys, sometimes unpicking the thread and attempting to sew the fabric back by threading through the exact same needle holes. He practiced very often and gradually, he became an expert at it and sewing became second nature to him.

A skill remains as an asset for life. But he didn’t know how he could have made an impact on life with this cleaning obsession of his. On a typical day at work, he went about his chores as usual. Before he could finish taking the meats out of the freezer to thaw, his manager stormed into the kitchen to inform the staff that a hotel guest was in labour in her suite. Everyone was in a panic as the baby’s head was reportedly already peeking out of her vagina, but incisions had to be made before her skin burst as she pushed for the baby’s exit and a hemorrhage complication would occur. The ambulance was on its way, but there wasn’t enough time when two human lives were at stake and the urgency of the situation made him decide undertake the risky task.

Everyone around was in shock and panic and there were no resident doctors in the hotel at that point in time. With his full confidence and assurance, everyone left the task to him, as he was the only person who seemed to know exactly what to do and the most efficient way to go about it.

His chores had recently been extended to cleaning the crustaceans as well. In this four star boutique hotel renown for it excellent cuisine, in his terms, he was promoted in his duties as crustaceans tended to be more difficult to clean out, having to keep all the flesh intact and ready for wonderful gourmet presentations. Cleaning out the prawns was the biggest challenge. He would first shell the prawns, leaving their fancy tail, and he could carefully make a slit in the small of their back, and remove that black thread of waste. Other times, he found eggs on the other side of the crustacean which he held between his fingers and squash the partially life form in them. It felt like bursting bubble wrap and it was something he enjoyed most as a child.

Given the urgency of the situation, he dashed out of the kitchen and took with him his pair of exceedingly sharp scissors reserved for cutting chicken carcasses into half. Carefully sterilizing them in boiling water, he took a deep breath and proceeded to operate on the pregnant lady. He made a neat incision, with a swift snip and successfully delivered the baby, tying up the infant’s umbilical cord, giving the newborn a neat button navel. He exhibited much dexterity and precision at sewing up the wound tightly and firmly, so that the mother would continue to enjoy a fantastic sex life with a brand new, tauter vagina. And all this learnt from documentaries and the American ER television series and anecdotes from conversations he overheard amongst doctors at the café in his neighbourhood.

The exhausted mother embraced her child, which he took extra care and effort to clean up after the birth. For once, the opportunity to thoroughly clean something that was alive and breathing; the experience was truly rewarding and incomparable to all the years of cleaning he’s done in the kitchen.