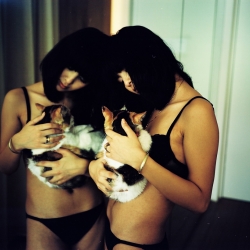 Revisiting the collection of three short films Short Stays 1 made by independent Chinese film makers in 2009/2010 the short films by Liu Jiayin, Peng Lei and Zhao Ye are now available to be viewed online after making their runs at International film festivals around the world.

My ex Beijing flatmate Samantha Culp and I conceived and worked on this idea in early 2009 and it seems like making films in hotels has become a trend these days from the Oriental Express to the Langham and now W hotels have also joined the bandwagon just last week, calling on video entries.

With a vision to support the growing contemporary Chinese art scene, The Opposite House commissioned a short film collection project in 2009 as an extension of their commitment to support emerging local artists in every medium, from sculptures to music and now, film. Short Stays is a unique project that has given a platform to independent film artists in Beijing to explore the concept and space of The Opposite House.

All three films-A Room with a Cat by Peng Lei, Excuse Me by Zhao Ye, 607 by Liu Jiayin-highlight the hotel’s symbiotic relationship with the worlds of art and design, and its bespoke approach to travel, architecture and guest experience. The three cutting-edge Chinese filmmakers have taken The Opposite House, Beijing as their starting point to write and direct a short film (7-15 minutes in length) set in and around the hotel, each with their own distinct sensibility.

From Peng’s pop-infused A Room with a Cat with its beautiful girl waiting for an unknown visitor, to Zhao’s subtly science fiction Excuse Me to Liu’s signature practice of filming her parents performing symbolic actions, all show a range of bold visions inspired by the space fit for daydreaming in the heart of Beijing.

“After a great run screening at festivals and diverse venues around the world, it’s fantastic to look back at the first edition of the Short Stays Project and share the full films online. We’re proud to have collaborated with The Opposite House, Beijing on this innovative platform that supports emerging filmmakers, and to have worked with three incredible Chinese filmmakers-pioneering one of the first film/hotel crossover projects. Since the debut of Short Stays, it seems many other international hotel brands have followed in their path. We look forward to Short Stays and future hotel-cinema blends!”  Samantha Culp, producer of Short Stays

The trailer for Short Stays 2 featuring films by Chinese directors Tawai Wang, Xiao Li and Wang Zao are now online. The final films Floating, The Nearness of You and Honeymoon Suite by the respective directors will be launched in September 2012.

“It is interesting to continuously get new perspectives of our hotel through different sets of creative eyes and we’re thrilled to share the second collection of short films by different film makers, this time lending a very different style of narrative from the last.”  Says Anthony Ross, Area General Manager of Swire Hotels, Beijing.