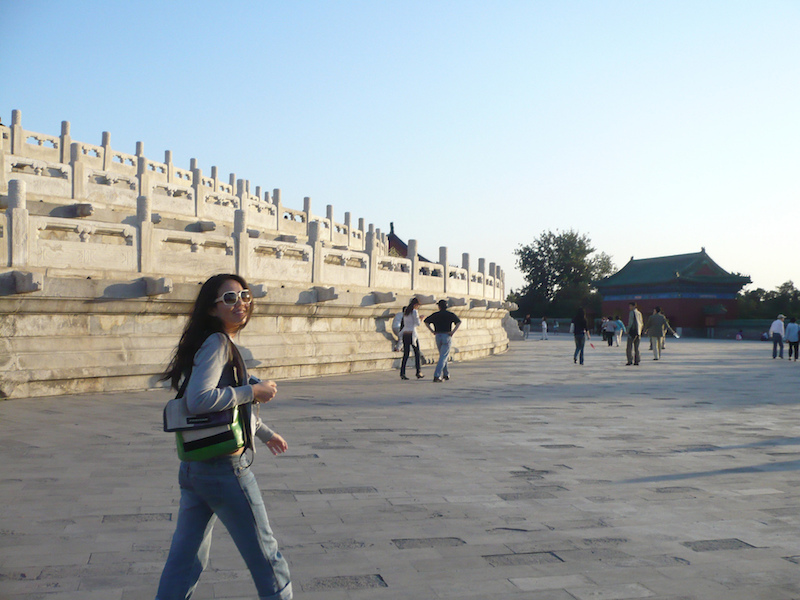 Photo: Just your regular weekend in Beijing going to UNESCO sites for a walk, either go out to the Great Wall for a hike with champagne in my backpack and sandwiches or the temple of heaven which still remains one of my favourite places. Lots of local eats close by and a market selling lots of knick knacks in the South of Beijing.

I picked up this book out of curiosity and didn’t realise it’d be such a great read, I finished it in two sittings and related so closely to it, while the plot is pretty high school juvenile, it still brings back alot of Beijing memories.

If you were an expat in Beijing, you’d find Kitchen Chinese a nice stroll down memory lane and you’ll find yourself laughing out loud at many points. If you’ve never lived in Beijing, this gives you an accurate glimpse into what life is like there, when you’re ethnically Chinese, but couldn’t be more different than the folks that grew up in the “Motherland”. And the way we perceive Chinese food has so many different renditions – living and eating in the capital city of Beijing was a real privilege because you could experience authentic provincial food at the different government municipal buildings. I am still very much missing good spicy Sichuan at Chuan Ban – cheap and cheerful eats and I hope always as good as the years I lived in Beijing.

Given that I spent about 9 months as the Food and Art editor at one of the city’s expat rags pre-olympics and covered the restaurant and art scene extensively, it was an amazing opportunity to really get to know the city well, as well was bear witness to the immense changes taking place in the capital. And living there when Youtube and Facebook wasn’t blocked yet, all the places the author’s been to, dated, and situations she describes – I can completely relate, even the navel gazing insecurities and awkward dating scene. I was more the bright eyed mid 20s, post Italy expat moving into Beijing and trying to assimilate with my then non-accurate flat tone Singaporean Mandarin although I spoke, read and write it well. (Personal trivia: I aced both my GCE “O” and “A” levels Chinese, or in those days they called it “higher Chinese” which was a step up from normal cirriculum Chinese). And of course given how I socialised only in the expat circles with everyone else who was missing home and making a life in China, commiserating often with my fellow overseas born and bred Asian girlfriends on the usual mistaken identity as a PRC slut and how we are magnets for complete assholes or the LBH -Losers Back Home – a term we came up with for all the awkward pale pallid white boys who thought themselves an Asian babe magnet after spending a year or two learning Beijing accented Mandarin. Sorry, not so attractive for an SPG like me. Oh, the (mis)adventures both good and bad.

A good friend articulated it very well – Beijing is such an important place in our lives because it’s those formative years of experimentation with food, transport and dating, trial and error and stories from an abysmal dating scene, amongst figuring out a career and exactly what to do with ourselves – in short, a time and place where we became adults. (above photo: the view from my balcony, I lived in a walk up diplomatic compound in the embassy area in Sanlitun, and typical winter evenings at dusk, on weekends – sometimes I am watching DVD series or curled up with a good book and having these views of fairy tale houses – the German expat’s favourite Schindler’s Anlegestelle restaurant.)

I was single most of my 4 years in Beijing learning about myself and trying to figure things out, all whilst constantly being mistaken for a passport hunting local. I then met my now husband at the end of his stint in Beijing and funny how life works out. I went on blind dates, to speed dating events, and even took up a personal ads classified  (email me for the password) and have plenty of materials for a book when over 400 people responded and I briefly dated a guy endearingly called beefcake – what American jock dreams are made of, a banker wanker type who was wonderful, witty, had the same sense of humour, was fluent in Beijing Mandarin and all round lovely but unfortunately also had the emotional capacity of a troll. The other thing I couldn’t accept was his choice of thousand island dressing over salads – sorry, but No.

Anyhow, Kitchen Chinese is an easy read I’d recommend and have included parts of it for the Anthropology class I teach on Food and Culture at the IFT Macao.