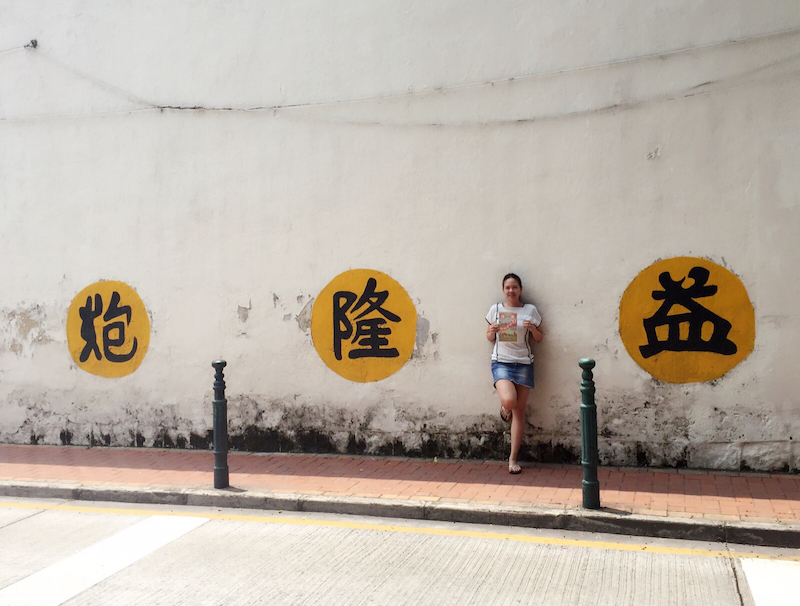 The PR agency (I wished I knew they were taking advantage. I did all the work pro bono, they lied that they didn’t have a budget.) of the Mandarin Oriental Macau approached me for this interesting project about “Hidden Faces” in Macao to feature my Firecracker labels collection.

I was happy to participate as I tirelessly work to try to put Macao on the world map beyond it’s glitzy casino exterior that it shows to the world. There is SO much history and culture behind this sleepy country in the backwaters of dynamic Hong Kong. Of course, there is often a need for sanity runs.

Oh, if you’re looking for firecracker labels – you can buy them here on my etsy store!

Can you introduce yourself?

I’m Juliana Loh, a Singaporean writer and blogger who has been living in Macao the last three years and owner of the blog Chicken Scrawlings. I relocated to Macau to join my husband who is a chef at one of the Michelin Starred restaurants in town. Prior to Macao, I was working and living in Hong Kong, Beijing, Treviso and Singapore over the last decade. It was in Beijing where I met my husband.

Can you introduce your blog?

Chicken Scrawlings was started over 10 years ago when I first moved away from home for work and it was a good way to keep in touch with friends and family back home. In recent years, it has evolved with my life in form and content and chronicles my daily life in Macau which mostly includes eating and trawling flea markets and junk stores for amazing antiques and collectibles. I also have the privilege of travelling regularly and enjoy sharing information about history, art and culture. In the internet age, we have such short attention spans and are so easily distracted, we no longer question the provenance of things. I find it particularly meaningful and fun to revisit old places, people and things with so many hidden stories to tell – and narrate them through my blog.

What are your fields of interest?

How/When did this idea of collection start (any specific occasion/event)?

I have always loved collecting old things because of the stories they tell. And when I first moved to Macau in late 2012, I read all about the history and the economy pre-casinos, before the1970s and it was all about firecrackers production. There is a whole section of this in the Macau history museum by St Paul Ruins. The flea markets sell everything from postcards dated from the 1900s through World War I and II where people were writing to their Portuguese friends in Macau throughout the war and then there were old biscuit posters, century egg posters and Firecracker labels – made for export to the USA to the Middle East (with Arabic characters) and of course for the locals. The old firecracker factories in Taipa (Yick Long) and Macau still remain standing and hopefully will be preserved as a heritage site, they are found in history books and look exactly the way they did then, except with a new coat of paint. I also collect matchboxes but haven’t been able to find the factories where they were produced. Naturally, matchboxes and firecrackers go together, so I collect them both.

Can you introduce your collection to us?

Well, most foreigners are interested in the Chinese versions with the 1930s coiffered Chinese ladies in qipaos, I have some of those because it’s a sign of the times and the belle époque post WWI and the industrial revolution. But I also very much like all the posters made for export to the USA that are very colourful pop art like with beautiful typography of the era mostly from the 50s-70s. 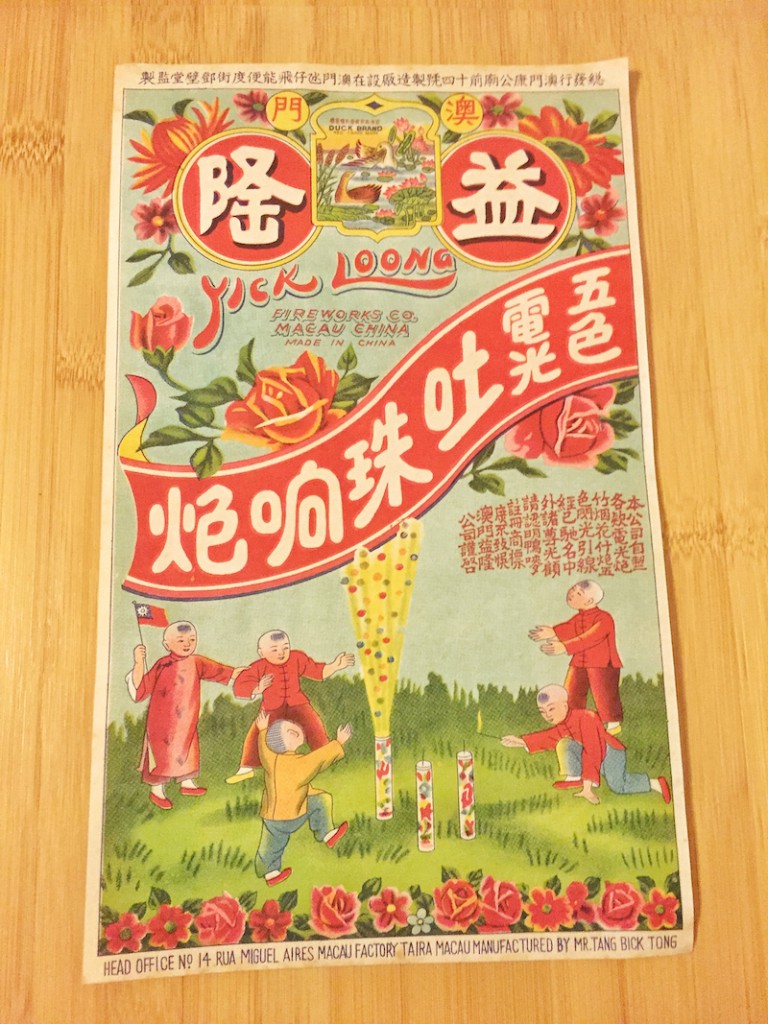 How many pieces have you collected so far?

How/Where did you find these labels?

I found them by chance in an old provision shop that sold everything from candies to notebooks and an assortment of posters and photographs. I had originally wanted to buy a bottle of water and stumbled upon all these dusty treasures! There are also ad hoc flea markets around Macau old alleys where the older generation basically lay out all sorts of collectibles from old records to cassette tapes on a blanket for sale and oftentimes they have stories that go with every piece. One of those vendors used to work at the firecracker factory and has anecdotes on working there.

Do you have any favorite piece? If yes, why?

My favourites include the animal series of lion, zebra and camel made for export to the USA, as well some sent to Jamaica and Georgia with farmers and children playing. The local labels of psychedelic prints of children playing with exploding firecrackers are interesting because it’s something that we would never associate with children today given the danger of it. There are several labels like the atomic bomb – the only one with the “Made in Portuguese Macau” label. This label showed the open minded brazenness of the generation taking into account that the destruction of World War II was only a decade or two before. My other favourite is one that says Made in China but there is a guy on a horse flying the old Republic of China flag that is Taiwan’s flag today – given the political sensitivity of both countries in recent years, I find this piece of history special and intriguing. 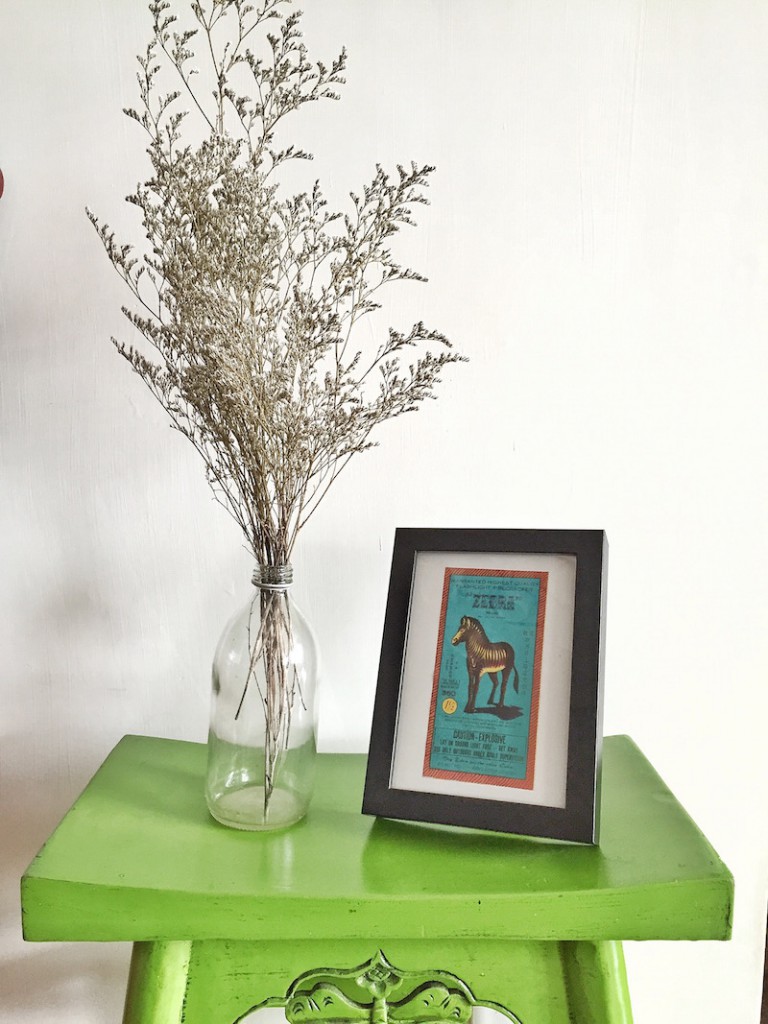 Have you discovered any funny thing while looking at them?

There is one with Arabic text with a lady’s portrait and I checked with several friends who read Arabic to make sense of it. An Afghan friend could make out only a few words, but his Mother who reads ancient Arabic script said the words meant “Head of Mother Mary” which is really odd to find on a firecracker label by one of the old firecracker makers Chan Thye Yick. So, this remains a special one in my collection. 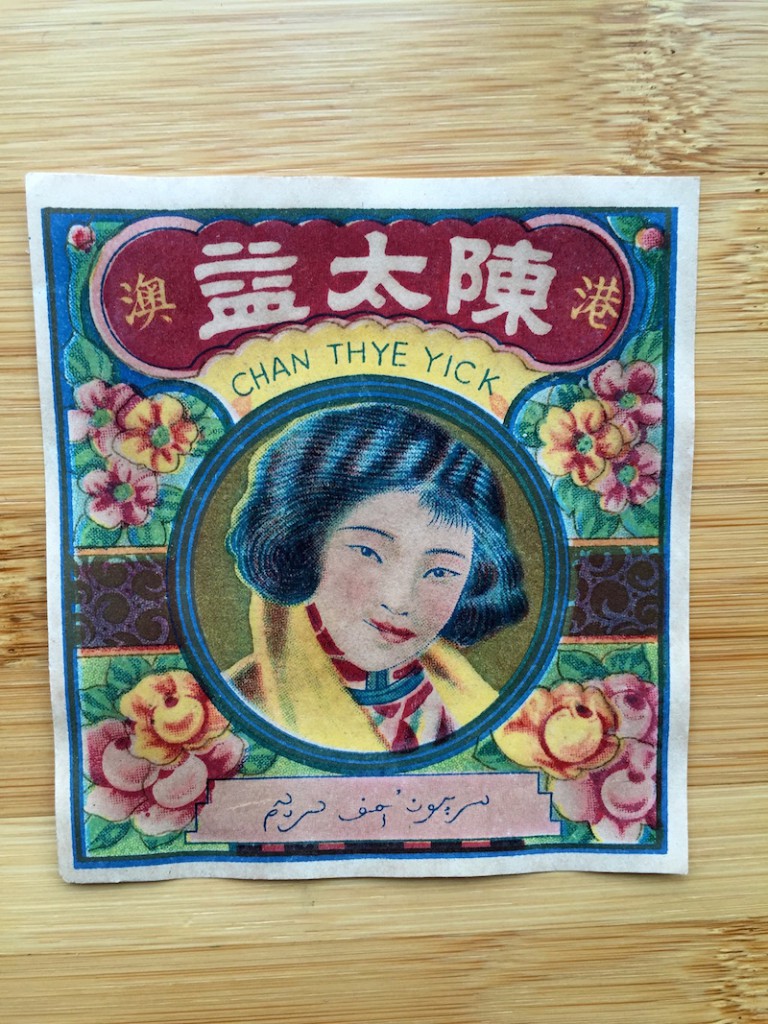 I grew up in Singapore and firecrackers are banned, so I only heard stories from my late grandmother and my parents on what it used to be like during Chinese New Year. So, looking at all the labels with children playing with fire, it makes me wonder how that used to be fun and games for children. When I lived in Beijing for over four years, every Chinese New Year was filled with fireworks and firecrackers that went on for all 15 days of the lunar new year and anyone could buy them to set them off, I did one year and found it more scary and dangerous than fun! Often times when I was cycling home, there were close shave with people setting off fireworks and firecrackers on the side of the road without any warning. It was all rather frightening, so I would stick with collecting labels rather than setting them off!

Any address where people can find this kind of vintage and rare items “made in Macau”?

Not in particular because a lot of it has to do with luck since the “flea markets” don’t always open and the junk shops always have a mix bag of things. With my friends egging me on, I did start an etsy store to sell them and many of them have been sold, which gives me a little joy every time someone brings a little piece and history of Macau to wherever they are in the world.

Do you know when these labels were designed?

Do you know why most of them feature English words?

Macau’s main export and economy depended on firecrackers made for export, hence the English words. Those for the local market were in Chinese. And as mentioned, there was one in Arabic for export to the Middle East!

Is there any recurring subject used on the labels? Do you know why?

Children feature regularly in those prints as well as flowers for local prints, atmosphere of celebration, lots of red (probably linked to Chinese New Year). Labels for export were always featured in bright bold colours.

Do you notice any evolution of the topics/designs used on the labels throughout the years?

Definitely from the illustration styles to the typography, the clothes, hairstyle of the people featured are wearing, all hints of the era in history.

Do you notice any specific design function of the brands?

Bright colours that get people excited and in a celebratory mood.

Do you know if any of your labels was released by IEC Long factory in Taipa?

Do you have any other collection you would like to show us?

I only have 3 matchboxes and they are not in great condition but I saw them in a history book from the library and love the colour (red and yellow) and typography of it.

What is your “Hidden Face*” of Macau regarding firecrackers? (a shop, a person, a place, an event…)

The Yick Long factory in Taipa village that still stands and every tourist walks past it without realising how much history has spun out of that huge compound that now looks deserted and empty.

What personal message would you like to leave to the travelers coming to Macau?

It’s so much more to Macau than glitzy casinos. There are multigenerational noodle makers, tofu makers, amazing food from local diners “cha chaan tengs” that have been around run by the same family for over half a century and the architecture from Portuguese colonial influence to moorish buildings and art deco shop houses. Keep an open mind and take it all in, Macau is so rich and full of history and interesting nuggets. And then there is Macanese cuisine that is so often misunderstood and associated with pork chop buns and egg tarts. It is not. For real Macanese food, you have to visit places like Riquexo, Apomac, Litoral and order the minchi, lacassa, buffassa pork, capela (meat loaf) and tacho a winter stew – that is authentic Macanese food. 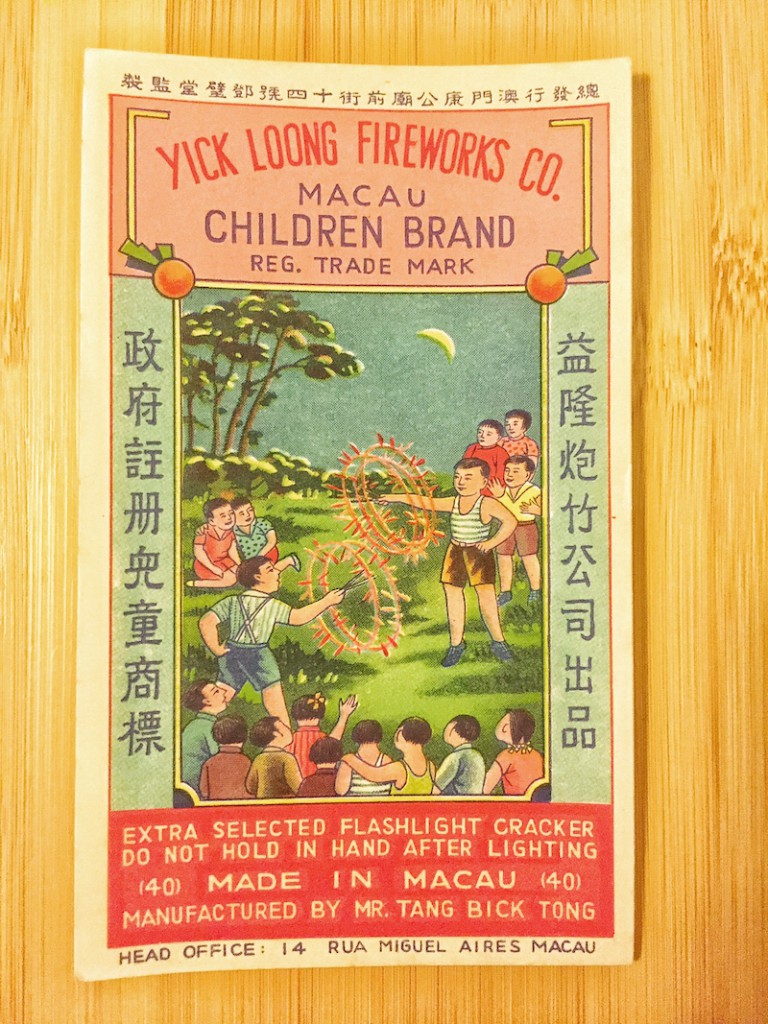