Nearly a year ago, I reviewed Bei restaurant that features North Asian cuisine with a creative spin.

“Housed on the basement level of the Opposite House, this contemporary Asian restaurant holds its own among the boutique hotel’s other much-fussed about venues like Sureño and Village Café. Bei’s chef impresses with a reinvention of traditional classics from Japan, northern China and Korea. Although service was occasionally overtly attentive and slightly intrusive, we were won over by perfectly rolled sushi so delicate that we were told to eat it with our hands. We started with a sushi variety whose highlight was the unagi sushi roll with foie gras (RMB68). The distinct taste of grilled eel paired wonderfully with the smooth texture of goose liver. However, the homemade tofu (RMB58) served with six different sauces did not impress and the pork belly (RMB108) was a little too greasy. Nonetheless, the king crab with XO sauce (RMB188) was a taste grenade of robust flavors and the roasted duck breast (RMB88) was cooked to perfection, smooth and succulent, retaining all its juices. Our date soup with walnuts (RMB58) and fried mochi with strawberry ice cream (RMB48) for dessert were both delightfully refreshing courses of sweet and savory. Breaking psychological barriers, Bei challenges our deep-set expectations of how Asian food should be served. We’ll definitely be back for more pleasant suprises.”

Eight months ago, I tried their tasting menu and I recently had a go at their summer menu – 4 generous courses at RMB358. Hooray for the readjusted prices and portions!

I have to admit that I have reservations about innovative cuisine as I’m still pretty old fashioned in my dining habits, I usually just want lunch/dinner instead of the theatre of it, sprinkled with too many surprises. The recent summer menu had me savouring every bite, figuring out the intricacy of every ingredient in each dish, which needless to say also provided excellent conversation over dinner.

I was so excited about my first course of sushi that I forgot my food blogging manners to get a photo before. So here’s a photo of the after. 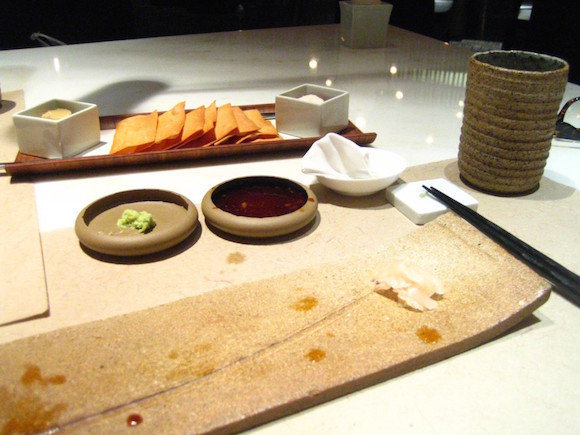 My dining companion ordered the grilled Australian king salmon served with x.o sauce broccoli rabe (kailan to Singaporeans) and sausage. Excuse the poor photography! (I took this photo down as it failed the photoshop police test by olive and other feedback on my poor skills!) 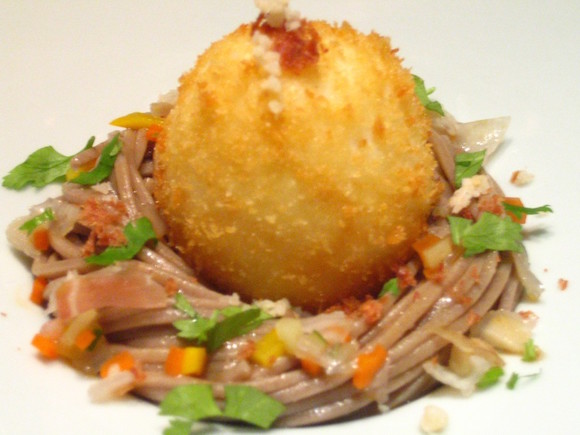 While I ordered the crunchy poached egg—a gorgeous surprise of cold soba noodles served with the most perfectly cooked egg, with a beautiful textured crusted shell. Hot, crisp and delicate, break the egg and the yolk flows into the soba bed, giving the whole dish a lovely eggy essence and alot of soul. This was my absolute favourite of the evening.

The process, according to chef Max involves leaving the egg between the temperatures of 40ºc to 60ºc, when the order comes in, it’s timed accurately in boiling water, then put into an ice cold bath (so the white contracts and the heat doesn’t get transferred into the yolk), this delicate ball is then deep fried with a crispy crust, this leave the whites completely cooked and the yolk perfectly runny.

Compliments to the chef! Having grown up with half boiled egg breakfasts in Singapore, I still can’t get it right 10/10 and I swear the formula of a fixed time doesn’t work, surely with the variables of egg size etc. 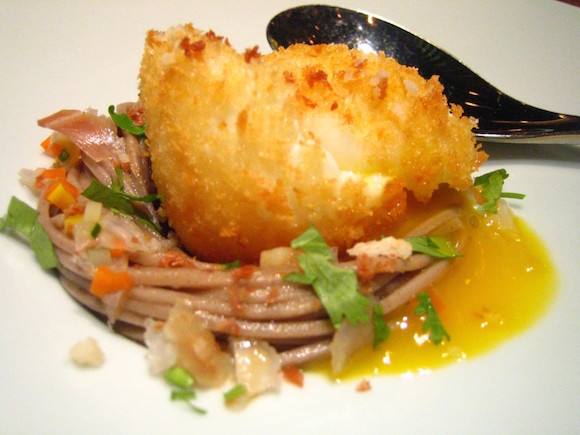 As a former dining editor in the city, I’ve been spoilt by too many dishes of fish. This one was a surprise, served with mashed edamame beans, with a clam soup with dried roe.

The watermelon sides looked exactly like peppers and had a chewy texture with a watermelon after taste(!). After trying to figure out the unique blend of textures, we got back to the beef of the matter. The hunk of meet was cooked to absolute precision.

I still can’t believe they were watermelons. We were told water melon slices were vacuum packed, frozen/heated repeatedly until it lost its moisture to give it a chewy texture. Another amazing feat that left me mind boggled. 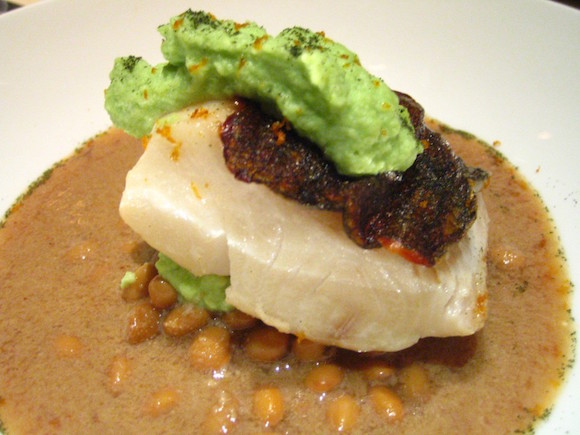 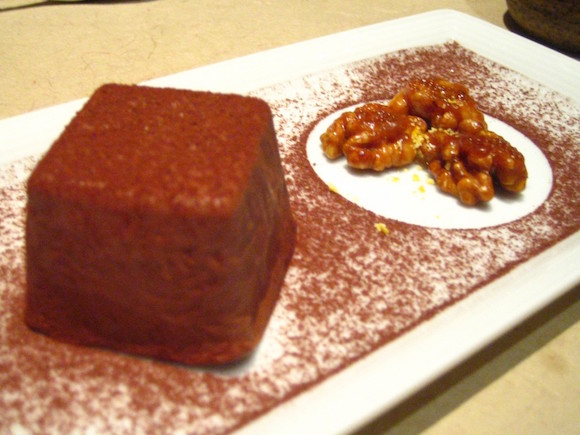 Dessert came in the form of a chocolate mousse served with pink Himalayan salt and walnuts, giving it a blend of sweet and salty at the same time! The verdict: Yums!

I went with the shiso and plum sorbet, with plum juice drizzled over. It came in a little candied golden “bird cage” which reminds me of chicken coops in Indonesia and the Kampongs (villages) in Malaysia. I definitely recommend this for a light way to finish. 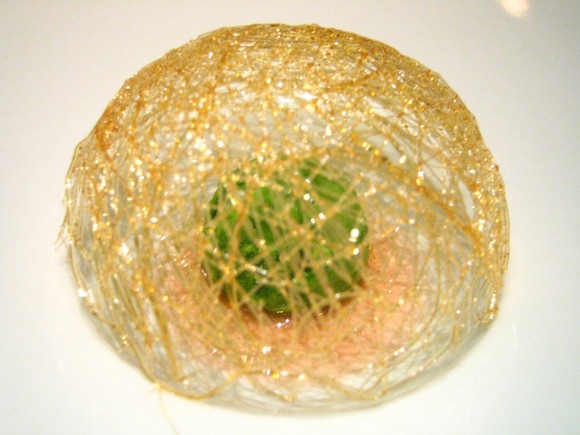