Every year in May the expat rag does a poll on our reader’s favourite restaurants in the city, the awarded restaurants are chosen by a voting system done online. 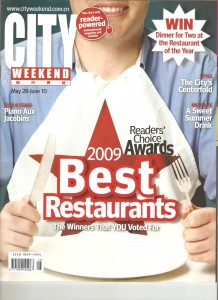 2,000 readers voted for their favorite Beijing restaurants. These are YOUR winners.

By Juliana Loh and Manuela Zoninsein

This chic Mediterranean bistro updates its menu weekly, working with fresh seasonal ingredients that fire the chef’s creative juices. The sharp black-and-white décor perfectly compliments Tao’s cutting-edge flavors. BEI and Blu Lobster took a backseat in this competition, but given the tight economic environment, it makes sense that people would look toward Tao’s resourcefulness for inspiration.

Beijing may love Italian food, but there are only a few stellar Italian eateries, so in this category, readers knew their favorites, and competition was fierce. Ultimately, the namesake of two-star Michelin chef, Claudio Sadler, squeezed by with a single vote to triumph over La Dolce Vita. “Great place to dine,” is how user Emiaglaia sums it up. Perhaps it’s due to the equal parts tender-yet-toasty veal Milanese. Sadler hails from Milan, after all.

No surprise that the city’s best burgers, according to our survey, are served at the capital’s best American restaurant (though we do reject the notion that American food can be summed up by meat patties alone). One CW user, Blade, was overcome with nostalgia: “The food is so authentically American that it truly hits the spot.”

Runner Up:
Steak and Eggs

The large Korean expat community living in Beijing gave big-ups to Gaon in this new category. Arranged according to a minimalist design, Gaon’s sensational organic-only dishes (like the divine abalone with pork and the melt-in-your-mouth stewed beef) are hearty and flavorful. The low-key décor lets the Korean cuisine take the spotlight.

Always packed on the weekends, Saddle Cantina probably didn’t need a poll to know it was our readers’ favorite. Saddle’s rooftop patio is always packed with night-time fiestas thanks to tasty Tex-Mex and margaritas so potent that they deserve a warning label.

Just as Phelps swam to repeat gold medals last summer, Hatsune and its creative California-style Japanese cuisine have swallowed this category, winning the title for three years running. CW user Michael points to “the interesting variety and texture,” raving about the “best rolls in town,” among which the “Moto Roll Ah” and “Una Ten” are highly recommended. A new outlet just opened in The Village means Alan Wong’s masterpieces are even more convenient.

This Indian eatery made a name for itself in Beijing by serving up a menu of authentic flavors at modest prices amidst colorful, Bollywood-themed décor. Caffeinated, a regular commenter on our website, sums it up well: “Delicious Indian cuisine, from the curries to the garlic naan. The price is reasonable and the staff are ultra friendly.”

CHEF OF THE YEAR:
Jordi Valles of Agua

Hailing from Barcelona, this Catalonian took the top spot with nearly 40 percent of all votes. Chef Jordi’s dishes are impeccably executed, and he makes a genuine effort to meet and greet guests. He gladly gives recommendations and tweaks dishes to suit different palates. If his food doesn’t charm you, he certainly will.

Runner Up:
Chef Ana of SALT

Last year’s runner up, 1,001 Nights knocked Rumi into second this year, heating up a Gongti Beilu feud that has no end in sight. The regular clientele of Middle Eastern expats delights in the nightly belly dancing performances, a fair accompaniment to the fantastic food. Lamb and chicken kebabs are top picks, along with the city’s one-of-a-kind spicy pita bread.

Burger joints have been popping up like Major League Baseball steroid allegations this past year, and the newly competitive landscape has forced meat patty purveyors to bring out their A-game. The debate over best burger continues to sizzle, but for this round, more than a quarter of the voters gave All-Star Sports Bar and Grill a decisive nod. Something about the American joint’s 65 plasma screens, stellar sound system and sports video games might add to the appeal, though we’ve been told by native Californian friends that this sports fan oasis serves the next best thing to In-N-Out’s revered classic. What is certain, despite the hemming and hawing, is that scarfing down a burger during the wee morning hours after clubbing is as American as apple pie.

This unexpected win suggests that readers are seeking true value for their money by hitting the all-you-can-eat buffet tables. Last year’s winner, Guantanamera, closed late last year, leaving Matsuko to rake in the votes. In addition to the Japanese favorites, unlimited Asahi beer or soft drinks and the free plate of sashimi keep the customers spinning through the doors.

For three straight years, The Bookworm has dominated this one. Sure, lots of places have great Wi-Fi, but only at the Bookworm can you pen your next novel, term paper or blog post in the company of two dozen other mobile nomads. Powerful Wi-Fi, an incredible authors series and jam-packed quiz nights make this the perfect spot for the information generation.

As last year’s Best American winner, Chef Too continues to garner accolades for its steak, burgers and brunches. This time, the Chaoyang restaurant’s simple take on quality meat has risen above the rest of the menu. Always one of the most buzzed eateries, Chef Too’s online reviews are adoring and effusive. Says Gmilam: “I’m thankful for Chef Billy and his greatness.”

Runner Up: The Bar & Grill at The Regent

Last year’s champ does it again, raking in a quarter of reader votes. Formerly named the Bubbly brunch, Senses recently received a gourmet reboot with the introduction of its inspiRED brunch, an even larger buffet with Champagnes, fine wines and incredibly innovative food stations. Among its divinely decadent cakes, pastries and candies, the giant strawberry mille feuille left us speechless. User Fenners88 sums it up: “This is a wonderland of culinary delights.”

Runner Up:
Chef Too

Sleek and minimal, Domus ousted long-time wine heavyweight Aria from the top spot, attracting a quarter of your votes. This world-class watering hole is testimony to the massive makeover Beijing underwent preparing for the Olympics. Minotti furniture, understated lighting and tasty tapas bites: everything, including the wine list, is confident and classy here.

For the second year in a row, Da Dong takes home the title, which could have something to do with its claim to be lower in calories than the competitors. (Though the succulent bird meat left skeptics of more than just a few of us.) The restaurant’s newest branch in the Nanxincang complex, especially its second floor, comes heaped with praise for décor and ambience. What has changed since we collected votes in 2008 is that readers were more willing to venture out and taste newcomers like Duck de Chine and Made in China. Old-timer Quan Ju De also made a come-back. Last year Da Dong took home a whopping 40 percent of the popular vote. This year, they squeaked by with 23.7 percent. Regardless, the double-D remains synonymous with Beijing kaoya.

Runner Up:
Made in China

RESTAURANT OF THE YEAR: Agua

“Finally, a restaurant where everything fits together: the food, service, ambiance, tablewear and value for money,” writes user Pablo, and other voters agreed, helping Agua rise above the competition. This new kid on the block is helmed by award-winning Spaniard, Chef Jordi Valles, who can’t produce his famous torrija dessert fast enough to sate the sweet-toothed romantics who come for “dinner in beautiful surroundings.” With a new terrace open, Agua is sure to be this summer’s hot spot.