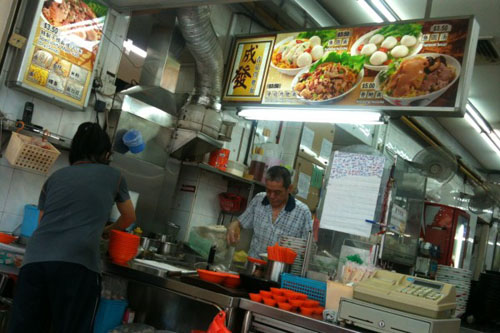 Breakfast is the most important meal of the day and Singaporeans adhere to the adage well. Carbohydrate heavy staples like rice, rice flour, glutinous rice cakes, fried noodles and vermicelli are the most common way Singaporeans start of the day.

There’s no where else in the world that makes delicious breakfasts like this and I have yet to a place outside of Singapore that serves a good bowl of Bak Chor Mee–savory, sour and tad sweet bowl of pork noodles. 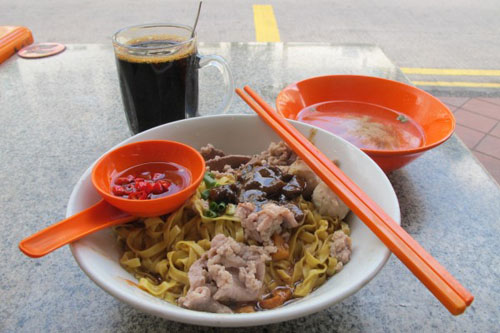 Bak Chor Mee literally translates to ‘meat’, ‘vinegar’, ‘noodles’ in the teochew dialect and is usually served with mee kia-thin yellow noodles, but I would recommend choosing mee pok-a fettuccini version of Chinese noodles if you’d like. The thicker flat egg noodles soak up the flavours better with their larger surface area and gives more satisfaction with each slurp.

It’s always better to order dry noodles (Tah meaning dry in teochew dialect), instead of the soup version, that way you get the full flavours of minced meat, marinated mushrooms, soy sauce, tad of ketchup, sweet vinegar and the fragrant goodness of fried shallots and little cubes of deep fried pork lard garnished over the dish. You will get a side bowl of soup usually made with pork broth.
Some stalls serve it together with fish cakes or fish balls and or slices of pig’s liver cooked just right-juicy pink medium rare, blanching it slightly before serving. Serving styles vary, but the base flavours should be an intoxicating mix of savory, slightly sour and a hint of sweetness with the richness of pork fat that doesn’t cross the border into heavy grease. A good bowl of Bak Chor Mee would hit the note just right.

Here’s my top 3 picks for the Best Bak Chor Mee in Singapore.

Where to go?
Jln Tua Kong branch
The Jalan Tua Kong stall in Simpang Bedok (just by park and shop) is definitely not a secret judging by how fast they sell out and the weekend crowd that dines in. Note that the noodles usually sell out by 2pm, and it is especially crowded over the weekends, so head there early for breakfast or brunch before noon to make sure you get some noodles to go if you don’t want to sit in the humidity.
Seng Huat Bak Chor Mee
Seng Huat is a family run business that has been in operations for over three generations and you’ll always see the old man swiftly making bowls of noodles in minutes. This North Bridge Road coffee shop (across from Bugis Junction) is open 24 hours, perfect for those peckish after a night of revelry or late night movie.
Seng Huat Eating House
492 North Bridge Road
Singapore 188737

Tai Hwa Pork Noodles
$6 is expensive to pay for a bowl of noodles, but the endless queue and price is worth the wait. Tasty, lardy egg noodle with generous amounts of mince pork, liver cooked a perfect medium rare and vinegar – I think they could do with more mushrooms however. The soup is thick, rich and tasty filled with seaweed and minced pork. 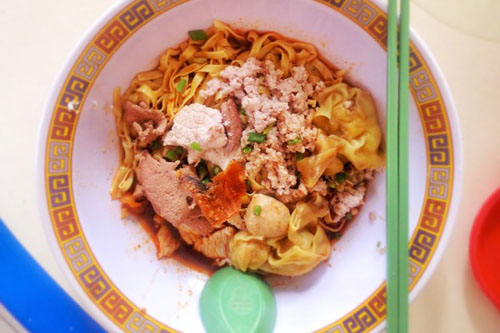 A piece I contributed to the Singtel blog: www.notatourist.sg