Married to a chef: 5 Things 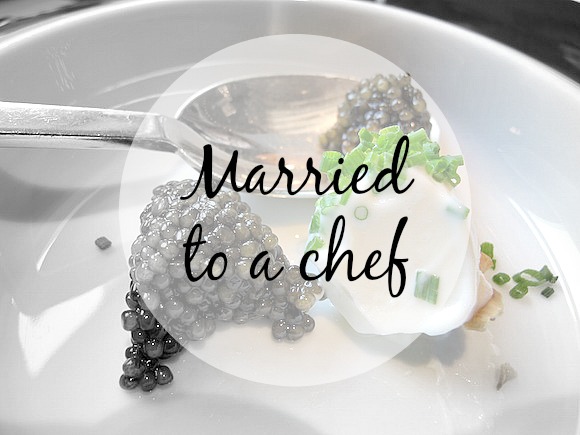 I was just reading this article today written by a chef, who on his profile says he’s also a writer and marketer which explains why his writing is all PR lingo – unreal and matyr meets pep talk. Feels like PR masquerading as a chef – but that works because it gets the message out! Chefs tend to be shy and mostly grumpy and express themselves on the plates, which really is the most important thing, pity about the PR if they were all better at it, every chef that makes amazing food would get the full credit they deserve. Unfortunately life is fair and some people have the gift of the gab and mediocre culinary skills, while others delivery magical deliciousness without a brag. (my husband is the latter and admittedly I don’t do enough talking on his part!)

So, I couldn’t relate to anything in that article, but this piece I could relate to. So, being married to a chef is wonderful and there are tons of articles, blogs and support groups for wives of chefs where they exchange tips on how to deal with the gruelling hours of their other halves, never celebrating any festive holidays and a large part of the time playing single mum. Thankfully we live in Asia and if we had kids, we would have the luxury that I couldn’t be more grateful for – to hire domestic help. I am already ever grateful for our helper since housekeeping really isn’t my forte.

Like my plate – it’s always half full of deliciousness like that potato ice cream and caviar on the husband’s restaurant menu – always an amazing on-going dinner conversation to be had.

So, everyone gets super excited when they hear you’re married to a chef, a Michelin starred one at that. So, here’s the low down as it is. It isn’t all fun and games, glamorous deliciousness. I think the other factor often overlooked is, in intercultural marriages, you crave for different comfort foods and often times I’m craving something Asian and him a large piece of steak. There’s definitely more to compromise and thankfully he doesn’t critique my Asian cooking!

Sorry to burst the bubble, all the Michelin starred gourmet deliciousness doesn’t take place everyday in the household after his 14 hour workday slaving behind the stoves. It’s me making simple Asian food! And because I have an equally demanding work schedule, sometimes I don’t have time to cook and I am ever- guilty of the sometimes empty fridge because of work travels and long work days. I look around my immediate social circle and am beginning to see the challenges of having a career when married to a chef… I guess you can’t have both parties working similar hours! As they say…. women can’t have it all!

2. We always get the special experience in restaurants – thank you global chef fraternity

Admittedly, many of our fine dining meals with the husband is never the usual experience, we take our aperitifs sometimes in the kitchen with the chef, get sent extra special dishes, always get to visit the kitchen after service and more often than not, the chef comes to sit with us at the table to talk about his menu, dishes and catch up with mundane life talk.

Special occasions also tend to be the busiest time of year for restaurants and birthdays are never a reason to take off from work. We’re all working adults with too many responsibilities, cakes and meals are always outsourced. Why add the extra stress?

I have never been needy – one of the things I love most is going to the cinema myself, and travelling alone, so being married to a chef kind of sealed my freedom of being able to continue to do the things I love on my own, and spend quality time when the husband is available.

The house parties we attend or host are always the best – worthy of envy! At BBQs, the best cuts of meat and seafood are ordered from the suppliers, great wines because sommelier friends are in charge of bringing the booze according to the menu! Michelin starred chefs taking turns to grill foods over the stove for perfect cuisson. Bernaise and mayo made on the spot. And then our pastry chef friends bring the best kind of desserts and country loaves of bread.

And while we’re back in France on holidays, the husband does all the cooking as we visit markets for him to gather inspiration. Simple dishes of truffle pasta, or blu lobster with morels  (recipe) and a whole range of homegrown vegetables in my in-laws gardens. They have the best tomatoes. Ever.

5. My cooking has improved and also now used to our grocery bills being about 5 times more than the average person

The thing about most Asian cooking is we tend to overcook most of our meats, except Guangdong specialities where the fresh seafood is cooked to the perfect point (steam fish garnished with sliced ginger and chives amongst others). Growing up in a Singapore kitchen, all the meats are cooked in gravy, soups or stews, dressed in rich intoxicating spices where the ingredient rarely gets a stellar role. Apart from the steamed seafood that my mother makes a point to watch over and always reminds me that we have to take it out before the timer is up because the meat continues to cook when you take it out of the steamer or fryer. It took me a while to get the al dente pasta right by the husband’s standards. I’m still a failure at baking because I’m always learnt to cook by agak agak style – estimating intuitively.

I can make a good bouillon, but have yet to master how to make a good galette – but I never fret because there’s a chef in the house to take over cooking emergencies!

Groceries – apart from special orders from the suppliers, eg truffles 10 times someone’s normal grocery bill, crates of asparagus when white asparagus is in season and then there is the butter, baking and cooking with President, while échire and bordier are for spreading.

Asia, Macau, the bad, the good, wife of a chef, xMarried to a chef
« Eating out : Tetsu Beijing » Macau: Tak Seng On Pawn Shop Museum UNESCO