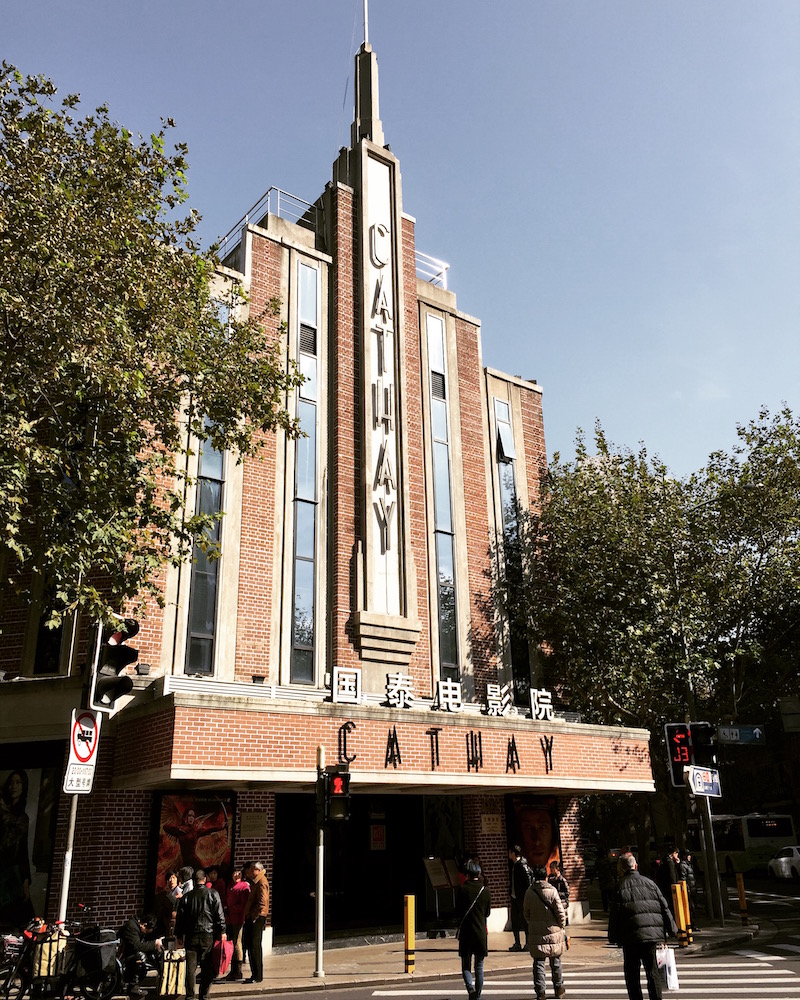 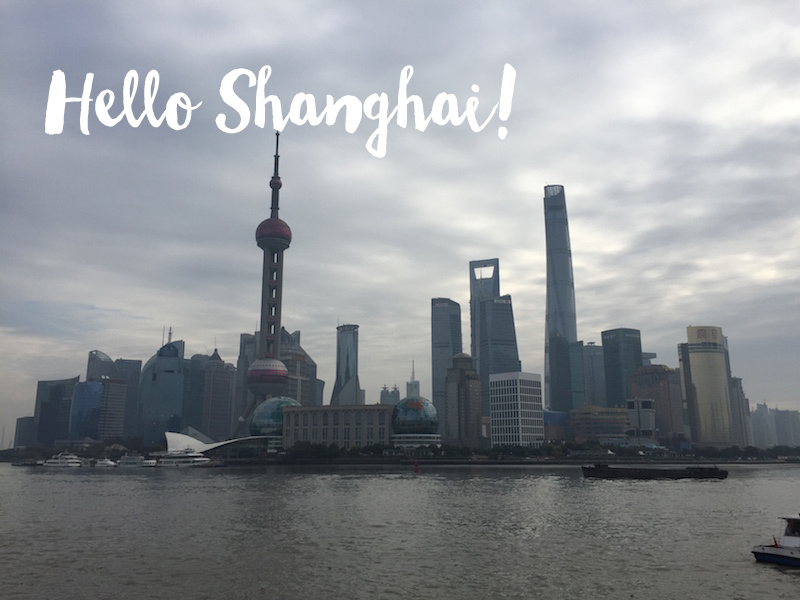 Shanghai is home to one of the richest collections of Art Deco architectures in the world. Unlike Miami and New York, some buildings of the Art Deco era in Shanghai combine elements of both Art Deco and “Chinese Deco”, fusing elements of Chinese architecture.

From the 1920s through 1940s, the Shanghainese embraced the mixed elements of East and West in every aspect from fashion to architecture. While foreign architects dominated the scene, returning Chinese architecture graduates developed a wonderful “Chinese deco” that incorporated Art Deco’s geometric lines in the form of tall buildings with Chinese roofs and motifs.

The same vein of inspiration during the era was echoed in fashion – from the ladies curly coiffeured hair to the high slits in the traditional Chinese qipao dress for mobility to dance the Swing and Charleston. 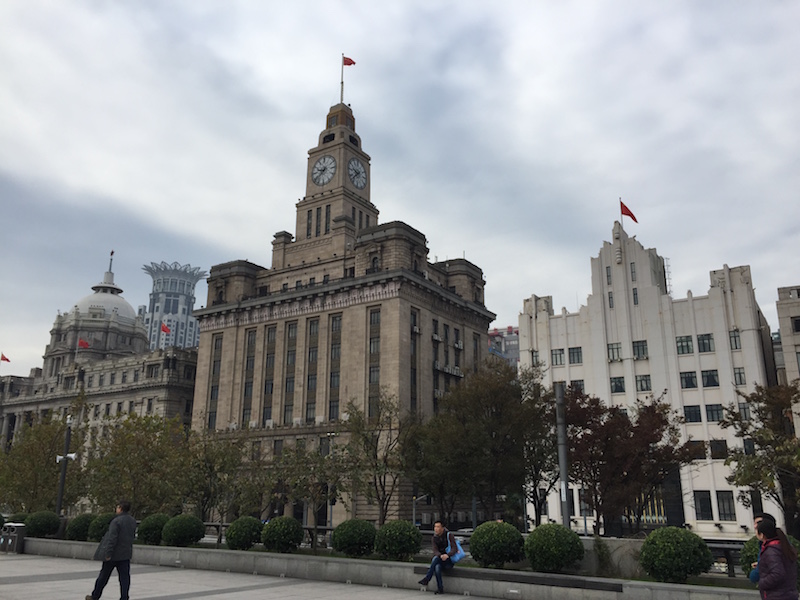 The “Bund” means embankment and was derived from the Hindi word “band” and has served as backdrop for movies from Bond movie Skyfall to Spielberg’s Empire of the Sun. Its postcard perfect skyline stretch of colonial architecture peppered with stunning Art Deco buildings on the west bank (Puxi浦西) was often compared to the Wall Street in the 1920s. The iconic Art Deco buildings on this stretch of the river changed hands through the decades and housed trading offices, banks, insurance companies and consulates. 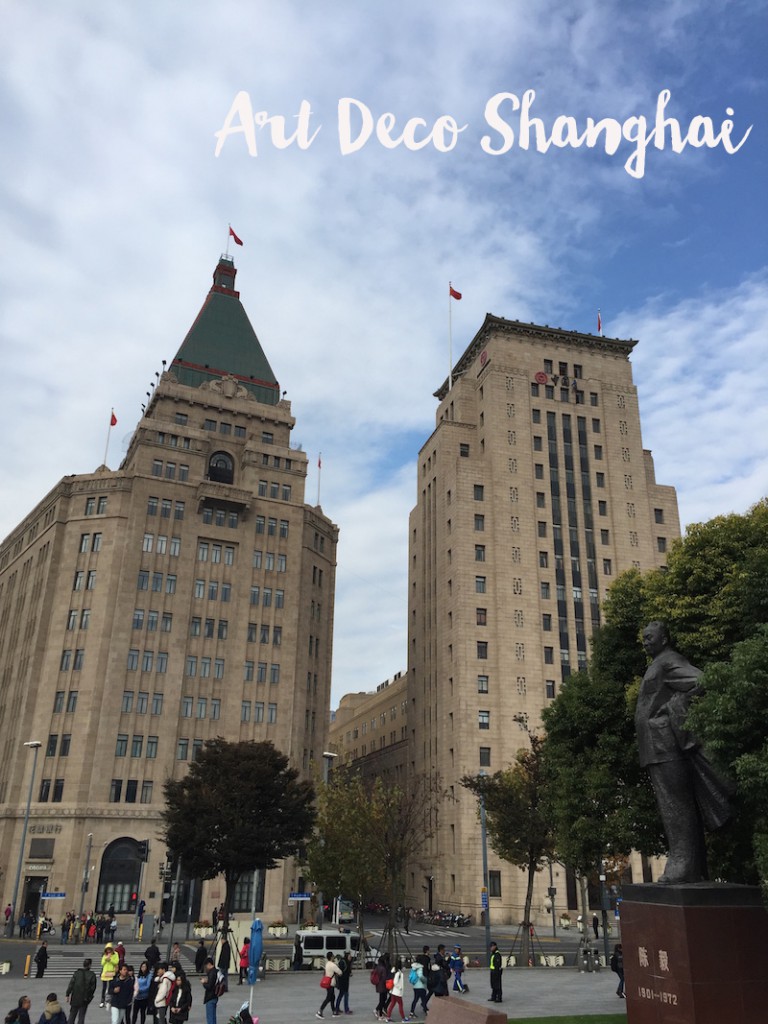 Talk a stroll along The Bund to admire the stretch of colonial architecture buildings with Art Deco motifs. Highlights include the Waldolf Astoria Hotel (highly recommend stopping for a drink at the Long Bar), Bank of China Building (Chinese Deco) and the Bank of Communication—the last of the Art Deco buildings were finished before the Communists took over in 1949. The eight storey high concrete building is designed in modern Art-Deco style in the 1930s, combined with Chinese Deco elements of traditional Chinese symmetry.

On the North end of The Bund is the iconic Art Deco Fairmont Peace Hotel originally built as the Sassoon House then renamed The Cathay Hotel – legacy of Sir Victor Sassoon. The influential businessman from a Baghdadi Jewish family shifted the family’s business empire from Mumbai to Shanghai and subsequently went on to build many Art Deco buildings in the 1920s and 1930s.

During the Golden Age of the 1930s, the hotel hosted celebrities from the likes of Charlie Chaplin to Noel Coward and countless diplomats.

The tall and stern Bank of China Headquarters building stands next to the Fairmont Peace Hotel was built in 1937 by Chinese architect Lu Qianshou. The building is an excellent example of Chinese Deco – a marriage of traditional Chinese architecture and Art Deco in the era. The Chinese roof has extensive sweeping eaves simplified and streamlined.

Lines down the front of the building are reminiscent of traditional Art Deco speedlines. The original design had no Chinese elements, but we were told it was likely a mandate from Chiang Kai-shek’s government to incorporate these elements for a more nationalistic approach. 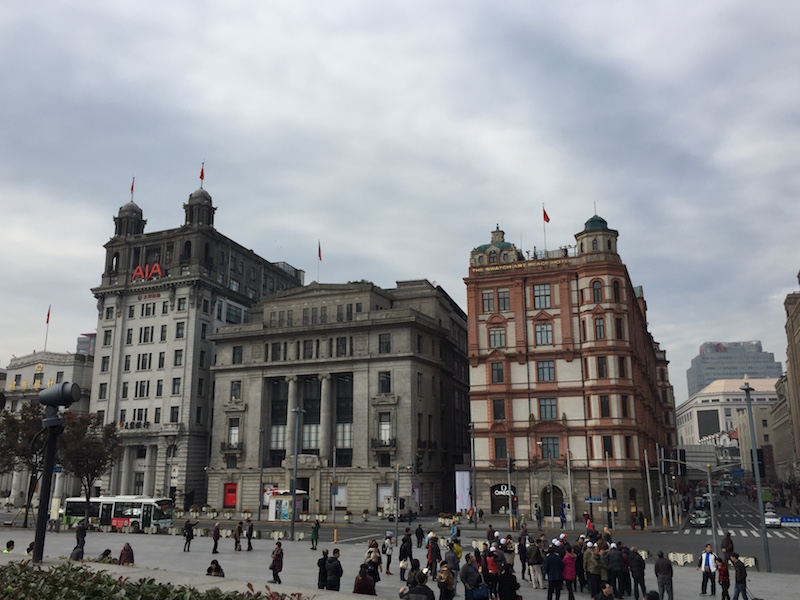 On the Southern end of The Bund lies the Swatch Art Peace Hotel in Victorian Renaissance style with ornate Art Deco ceilings, not to be confused with its sister property with the distinct green copper roof.

The other historical colonial buildings here are now home to the city’s hottest restaurants and clubs, Three on The Bund celebrity chefs outfits Jean Georges, Paul Pairet and Joel Robuchon opening this Spring on Bund 18.

Need a pit stop for Afternoon Tea? Have it in style and relive the hey days of the 1920s at The Peninsula Hotel tucked round the corner from The Bund, The hotel is a new build in “Echo Deco” style – with the geometric lines and motifs of the Art Deco era.

The Okura Garden Hotel was the former French Club built in 1926. While the tennis courts and indoor swimming pool have since been removed, the hotel’s interiors still drip with details of beautiful Art Deco motifs. The ballroom boasts a stunning Art Deco stain glass multi tonnes light feature shipped directly from Paris in at the height of the Art Deco era. Other motifs pepper the hotel building from the rounded balconies to its Jazz Age bas-reliefs and staircase railings. 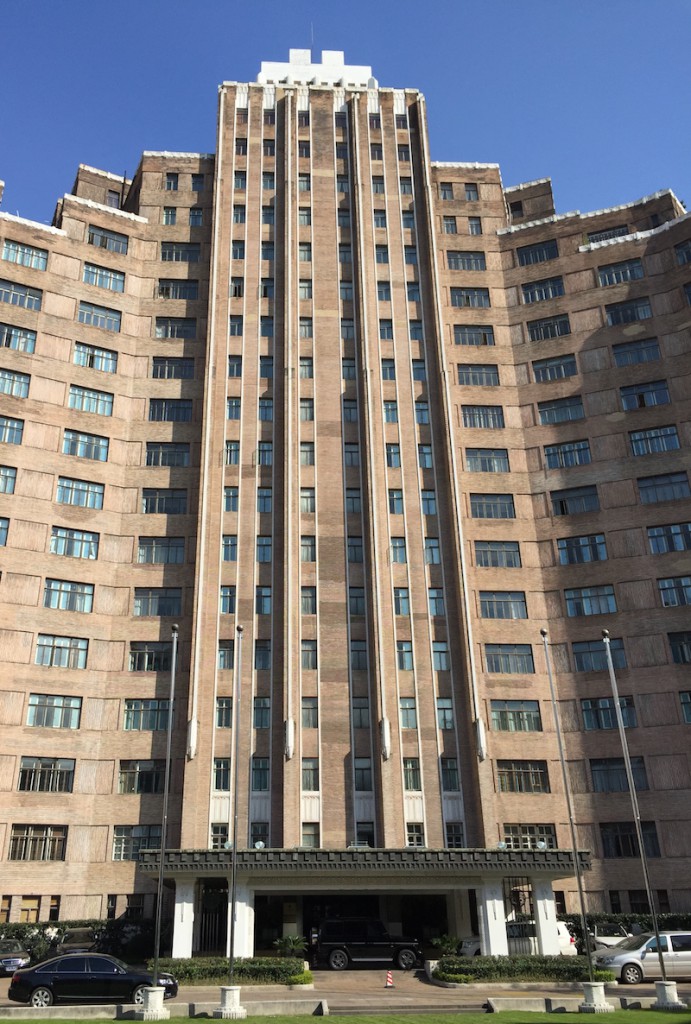 Down the street, the Art Deco architectural legacy of Sassoon stands the Cathay Cinema fully renovated on the inside in 2003 and looks nothing like it was before. Fortunately, the restored façade remains true to its beautiful Art Deco form. 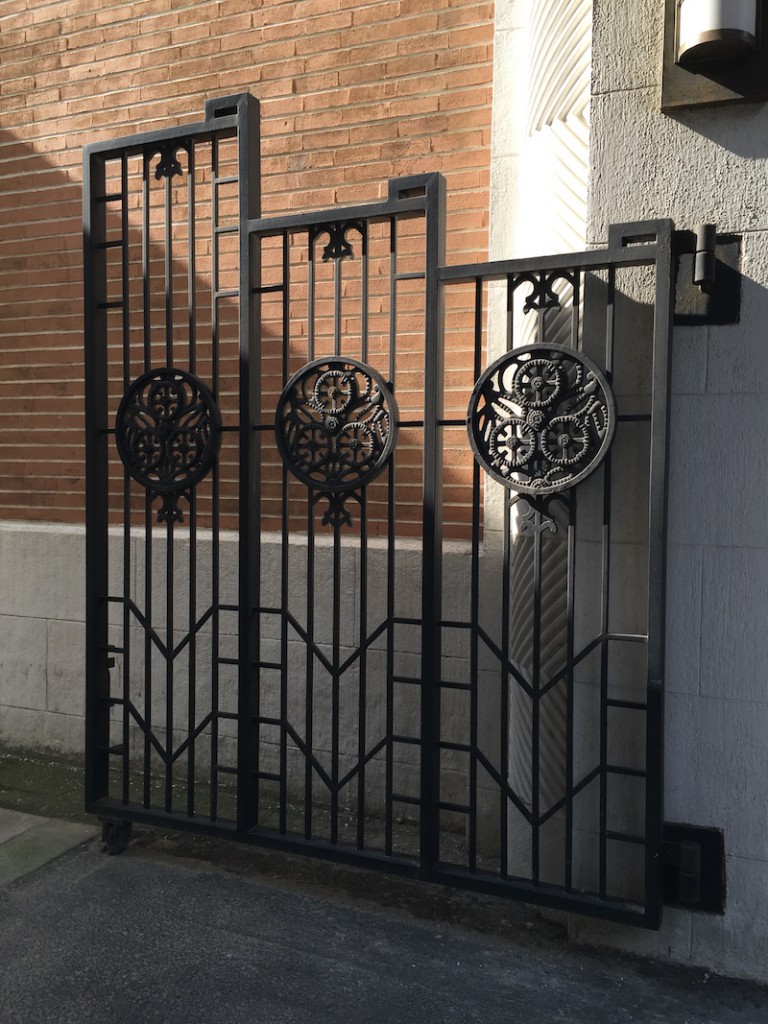 A short skip away is the former Canindrome built in 1928 in full Art Deco glory when gambling was a very popular activity then. Unfortunately the building was demolished in 2005 is now a park Shanghai Culture Square文化广场.

Prolific Hungarian architect Laszlo Hudec left a legacy of over sixty 20th century buildings, many of which were Art Deco. The Shanghai Arts and Crafts Museum in the French concession was designed in 1905 in French Renaissance style with Art Deco details in its interiors.

Shanghai is often referred to as the New York or Paris of the East, and remains a melting pot of cosmopolitan culture. The Art Deco style resonated well with the Chinese for the bold geometry, symmetry and lines translated well to fengshui, its visual balance worked with the hierography of Chinese characters.

For an in depth look at the stories behind these wonderful buildings, Shanghai Art Deco runs bespoke tours around the city and most recently hosted the World Congress on Art Deco® 2015  The Bund and French Concession areas are just tip of the iceberg. Shanghai Art Deco has led tours for Eastern Europeans tracing roots of their ancestry in Shanghai in the Golden Era of Art Deco. Other tours they have run include tracing the history of iconic Art Deco buildings of the Jewish community. The Jews made vast contributions to education, commerce and medicine in Shanghai and Sir Victor Sassoon was probably one of the best known patrons that contributed to building beautiful Art Deco monuments in the city.

If you’re looking for broader architectural walks, try Shanghai Walking Tour that takes you through different neighbourhoods. History buffs can start with Historic Shanghai for background reads or a copy of “More Shanghai Walks” by Tess Johnston. 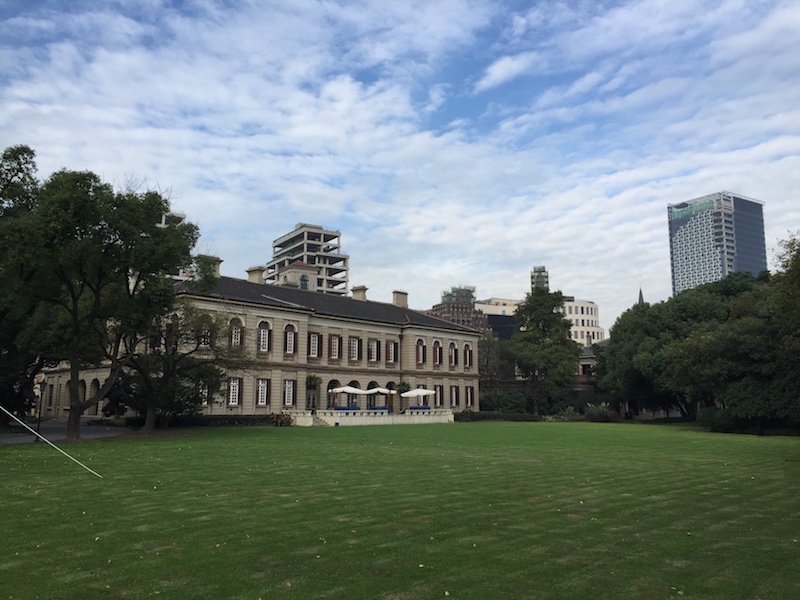 Beautiful British colonial house that has turned into a private club with a restaurant is where you start your tour with Shanghai Art Deco.