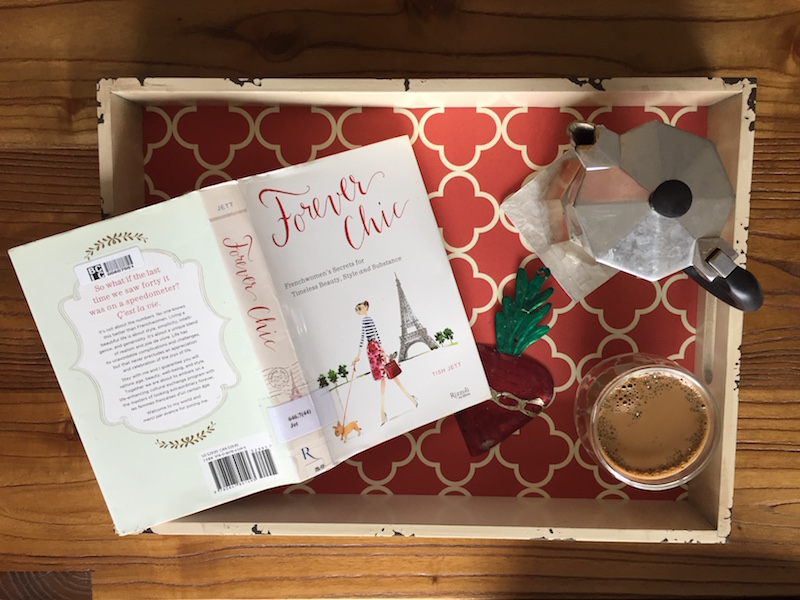 Picked this book up out of curiosity thinking it’d be in the genre of chick lit, but French Chic was one snooze pill and I have to confess I didn’t finish it. Well, I am married to a French man and have been to France dozens of times, through the villages, French Riveria where women carry their Birkins as beach bags in St Tropez and Monaco.

And then, of course Paris in Winter, in tourist summer season (do not wear shorts, that is a faux pas and a dead tourist giveaway) and the in between seasons of Spring and Autumn, classic style doesn’t go out of fashion and scarves make great accessories. I can tell you that many of the stereotypes in the book aren’t true.

The book focuses on women “d’un certain age” which refers to women in a polite way over 40 years old. Written from a starry eyed been there done that American ex fashion journalist, you’re not getting the real spiel but rather, her glamourised version and her social circle of socialites, so… I am afraid, that’s not the real world.

I think the problem with these books are, authors like Tish Jett over romanticises the French cliché. I know plenty of super fashionable and elegant French women amongst my friends from various provinces in France, but I also know equally regular women like you and I.

I know one of the secrets they always say is to have those classic pieces, that little black dress, more black, greys and neutral colours. Infact some of my most elegant friends have the tiniest wardrobes. Their personalities kind of shine on their own. Scarves are another accessory most of my French women friends don’t leave the house without.

So, unless you have run out of reading materials. I wouldn’t recommend it. It got rave reviews… naturally from Americans… there is a myth that French women are more chic and French mums parent better (and their kids eat everything… NOT true, I know 100% French children who don’t eat their greens and don’t even eat cheese.

Given my exposure to the French on a regular basis for nearly a decade both in France and abroad, I have a pretty good idea of the day to day of their lives. And, believe me, they are pretty regular folks like all of us. And like everyone else, parenting, upbringing and everyone’s own childhood baggage comes to play when they raise their children. So, stop with the romanticised myth already.