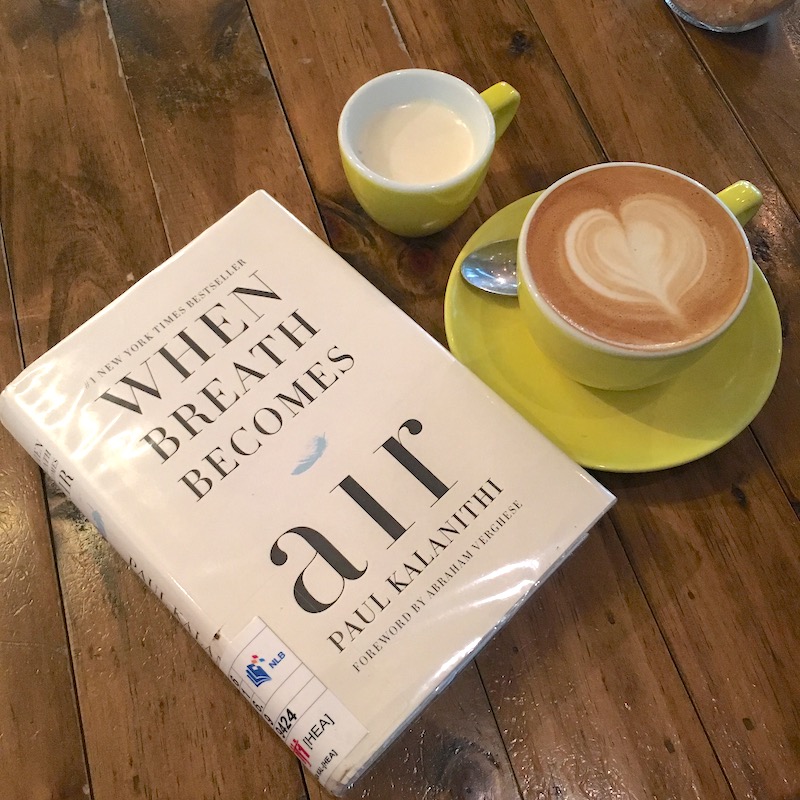 Many people loved this book and recommended it, but it was also interesting to see the reviews of people who disliked it and called him a narcissist – but what does one expect when they pick up a memoir?

I’ve been really lucky with my team of doctors who saw me through cancer treatment, with a humane empathetic side. Shout out to Dr Rebecca Dent and Dr Veronique Tan at the National Cancer Centre. If you’re a Type A sort of person, you definitely want them on your team.

Back to Kalanithi’s book Breath becomes Air, I think it’s done a brilliant job of bridging doctor and patient perspective, asking deep questions about the medical system, the meaning of life and death.

One of the pages stood out for me and I think sums up a lot of the cancer narrative in the social media sphere.

“Patients, when hearing the news, mostly remain mute. (One of the early meanings of patient, after all, is ‘one who endures hardship without complaint.‘) Whether out of dignity or shock, silence usually reigns, and so holding a patient’s hand becomes the mode of communication. A few immediately harden (usually the spouse, rather than the patient): “We are going to fight and beat this thing, Doc. The armament varies, from prayer to wealth to herbs to stem cells. To me, this hardness always seems brittle, unrealistic optimism is the only alternative to crushing despair.”

I feel the same about the brittleness of the pervasive war metaphor and personally felt that it gave cancer more power by labelling it, qualifying the unknown as “an enemy”, when it’s only one’s own cells… Everyone’s got their own way of dealing with things and journeying through the torment, and I found Kalanithi’s narrative comforting and relatable.

I dated a medical student and it takes commitment to get through med school, dealing with life, death, feelings and going without sleep for 48 hours. Reading the memoir brought back memories of witnessing the commitment, resilience and passion that gets one through medical school and how it feels to be the other half supporting the gruelling schedule.

Most of all, I loved how it encapsulated the human side of things in the medical field: empathy, kindness and how medical workers are seen as people rather than their static role as doctors.