This story is behind a paid wall and the editor’s pick under premium content, so I’ve taken the liberty to publish it here as my blog has always been about making recommendations for travel. Apart from the casino shots, the photos inset are taken by me. 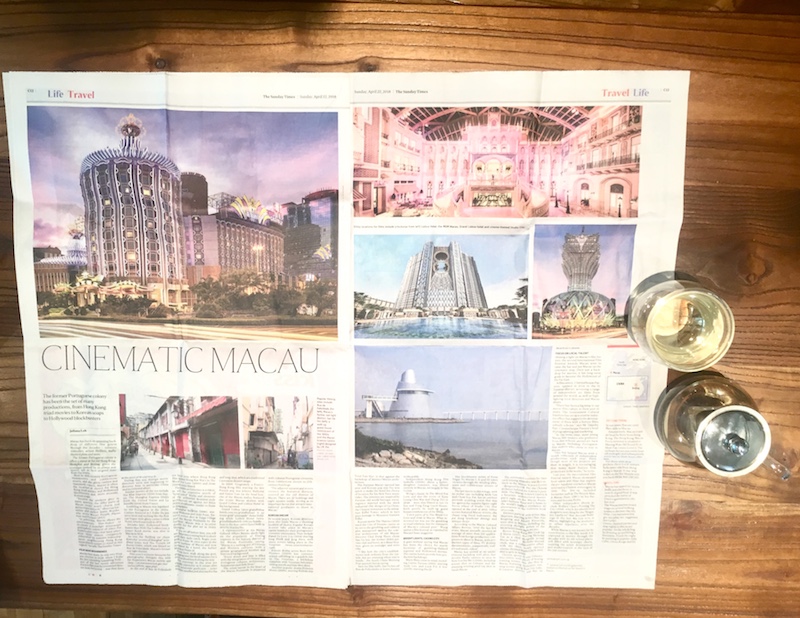 With this depth of diversity, Macau has been a desirable backdrop of different film genres through the decades – romantic comedies, action thrillers, mafia-themed plots and more.

The former Portuguese colony is often a stand-in for old Hong Kong, Shanghai and Beijing, given the nostalgia evoked by its places and spaces, left in their original state from the 1950s.

“Despite the modern glitz in many quarters, the older parts of Macao retain much charm and picturesque interest,” observes historian and author Jason Wordie, who wrote Macao: People, Places Past And Present.

“In particular, Macao allows the contemporary film-maker to recreate a nostalgic streetscape atmosphere redolent of other Far Eastern port cities that have otherwise been almost completely obliterated by massive redevelopment; neighbouring Hong Kong immediately comes to mind in this regard.”

Macau first made its way into Western cinema in 1939 when L’Enfer du Jeu (meaning Gambling Hell) – one of the last exotic adventure French film noir by renowned director Jean Delannoy – was shot in Macau between the second World War and the Japanese Occupation. During this era, foreign movie directors were just beginning to discover Asia, in particular China and it’s exotic oriental allure. Macao remained neutral territory during the second World War as a backwater of British Colonial Hong Kong that fell to Japanese occupation. Similar movies of the era include “The Blue Express”(1929) from Russia, “The Shanghai Express” (1932) from the USA and “La Bataille” (1934) from France.

Gambling in Macao was made legal since the 1850s when the Portuguese legalised it in the autonomous colony. Casinos featured in L’Enfer du Jeu were local and nothing like the first Las Vegas style glitzy casino Lisboa Hotel built in 1970.

Decades later, Hollywood blockbuster Man With The Golden Gun, a James Bond movie, was shot in Macau in 1974. So was the thrilling car chasedown the “streets of Shanghai” in Indiana Jones’ Temple of Doom (1984), which was shot on Rua de Felicidade Macao’s former Red Light District.

This area is a favourite for photography with tourists. Navigate this with the Experience Macao mobiles app At the end of Rua de Felicidade are local Inns where Wong Kar Wai’s In the Mood and 2046 was filmed. The 1950s architecture is evident as are the subtle details and repetitive motifs of “Brise-soleil” bricks and elements of the utilitarian brutalist-style architecture set against Art Deco 1930s shophouses similar to those in Singapore.

Shanghai Surprise (1986), starring Madonna and Sean Penn, featured scenes shot in Taipa Village and the Macao Peninsula by the harbour. Macau was a location double for the plot set in 1930s Shanghai. If you set off early enough before 9am, you’ll see fishermen coming back ashore with their daily catch. Begin your walk at Ponte 16 and walk along the port, step into the local eateries for some fresh seafood lunch along the way. The evenings in the area are equally cinematic as it comes alive with street side push carts of food – order your wanton meen,taufoo fa and tong shui – traditional Cantonese sweet dessert soups.

In 2009, Vengeance, a Franco-Hong Kong film starring the late French pop star Johnny Hallyday and Simon Yam (as the head honcho of the Macau mafia) featured the iconic Macau skyline with Grand Lisboa and Lisboa hotel  in the background, as well as action scenes along the beach in Coloane.

A representative at the Macao Cultural Affairs Bureau sheds light on the popularity of filming requests in the historic district of the Macau Peninsula, saying: “Macau is a melting pot of Chinese and Western cultures, with a unique geographical location and historical background. Every street and lane is filled with the integration of Chinese and Portuguese cultures, architecture, humanities and daily lives.”

The urban layout in the heart of the Macau Peninsula is peppered with colonial Portuguese elements, from the cobblestones street to 17thcentury buildings.“The adjacent squares and streets connect the historical districts, centred on the old district of Macau. There are 22 buildings and eight squares inside, serving as an important factor that attracts international producers to shoot in Macau.”

In recent years, Korean directors have also made Macao a shooting location of choice. Popular Korean drama series take place in Macau’s casino hotels for their protagonists’ romantic encounters. They include Fated To Love You starring Jang Hyuk and Jang Nara, with many scenes taking place in The Venetian.

The Parisian Macao opened in 2017 and Korean pop star Psy was quick to make the hotel his choice of location for his New Face music video. The interiors inspired by the grandiose of Parisian old world baroque extravagance married with sleek industrial chic design at La Chine, the Chinese restaurant in the miniature Eiffel tower, homage to Monsieur Gustav. <

Korean movie The Thieves (2012) used City of Dreams casino as their set to the gambling and robbery plot, juxtaposed against the colonial architecture of old Macau. Director Choi Dong Hoon chose San Va Inn, the former private club and hotel in the 1930s, as a shoot location, given its nostalgic and retro vibe.

“I liked how the city’s “establishments look ordinary from outside but stunning when you’re inside.” Choi Dong-hoon, the director shared.

Save for film buffs, San Va Hotel off Rua de Felicidades is lesser known to the general public. Independent Hong Kong film Isabella (2006), was entirely filmed in Macao, set largely in San Va Inn as the plot moves along with a father-daughter romance.

Wong Kar Wai’s classic In The Mood For Love (2000) – and also the scene of Tony Leung Chiu-Wai and Zhang Ziyi of Wong Kar-Wai’s 2046 (2004) – was also filmed in San Va Inn and Tong Fang Guest House, both poorly lit walk-up guest houses reminiscent of the 1950s.

“I shot parts of In The Mood For Love and 2046 in Macau. What interested me was not the gambling or triad relations, but the remnants of Macau’s colonial past,” Wong reveals.

It goes without saying that Macao has been the choice for movie sets for gambling-themed regional and Hollywood movies. The casino hotels provide grand and luxe backdrops for movies.

Many movies come to mind, including Casino Tycoon (1992) starring Andy Lau and Look For A Star (2009) co-starring Shu Qi.

The blockbuster series of From Vegas To Macau I, II, III takes us through the winding alleyways and cobblestone streets of Macao.

The last movie in this trilogy, with its stellar cast including Andy Lau and Chow Yun Fatt, has an outdoor poolside wedding scene that was set against the backdrop of the massive figure-eight Ferris wheel of Studio City that opened at the end of 2015. Other scenes featured Macau streets, local teahouses, street side pushcart dining and antique shops.

According to the Macao Cultural Affairs Bureau, “over the last few years, Macau annually receives an average of more than 120 applications from foreign production companies to shoot in Macao, with production types of films, TV dramas, documentaries, commercials, trailers and music videos”.

Macau has served as an exotic Oriental backdrop with plots that involve flashy casinos as seen in Now You See Me 2, including scenes shot on Coloane, and the stunning evening pool top shot in Sands Macao.

The minimalist interiors for their card-tossing wizardry was shot entirely in the Macao Science Centre – designed by IM Pei, the Chinese architect behind the Louvre’s pyramids. The Macao Science Centre is a futuristic architectural masterpiece right on the Macao Peninsula’s harbour front, and home to the world’s highest resolution 3D planetarium in the Guinness Book of records.

In 2016, Skiptrace, an action film starring Jackie Chan, Fan Bing Bing and Johnny Knoxville, distinct parts of the movie were shot in Macau, including the stunning skylight atrium of the MGM hotel.

Recent Hong Kong film Cooking Up A Storm, starring Nicolas Tse as a chef alongside actual Macau-based Michelin-starred chefs, was a collaborative effort with the then newly opened cinema-themed Studio City in 2015, shot largely in-house.

Shining a light on Macao’s film history, the second International Film Festival Awards Macau (IFFAM) aims to raise the bar and put Macau on the cinematic map. Once just a backdrop for movies, Macao has long-term goals to become the Hollywood of the Far East.

A film centre, Cinematheque Passion, opened in 2016 in the St Lazarus district, screening a range of independent art films from around the world, as well as highlighting local directors and Macau shorts.

“There has been a big jump in our movie/film culture in these past ten years. The Government Cultural Institute has set up a creative industry office that supports the development of films with a feature films subsidy scheme,’’ says Mr Timothy Fan, Cinematheque Passion’s head of programming and marketing says.

“At the same time, more Macau young film makers who graduated from film schools abroad are back in Macau, including Portuguese filmmakers who chose to stay in Macau.

“This has helped Macao with a steady collection of independent productions each year. Even though most of the projects are short in length, it is encouraging that many more feature film projects are in the works,” he notes.

Last year, the IFFAM showcased local talent including favourites The Bicycle Man, A Macao Diary by Ivo Ferreira and Antonio Pedro. All three films explore the years before the pre-handover era when Macau returned to Chinese sovereignty in 1999 and sheds light on past and present.

Other independent shorts include Wallace Chan’s Fonting the City, which documents local designers searching for the “forgotten typefaces” that decorate buildings in the San Ma Lou area in Macao, highlighting the aesthetics in urban typefaces over the decades.

While Macau isn’t known for its contribution to the film world, it is captured in the magic in many sets through the decades with its old-school places still filled with nostalgic charm, resisting the urban development and modernisation at the turn of the 21st century.

Perhaps with the turn of the tide and the government shedding light on the industry, it may just pave the way for a new generation of directors and actors. Just an hour by ferry from Hong Kong, movie buffs or for those simply on the search for good food, there’s plenty to discover in the sleepy backwaters of Hong Kong, that was also awarded the status of Unesco gastronomic city in 2017.

The Macao tourism board suggests several walking routes to discover the city. Casino-themed parties and stag nights in Macao are popular. Go the whole hog by dressing up, hiring a limousine, and finish the night partying at popular clubs Cubic, China Rouge and D2.

As they always say: “What happens in Macau stays in Macau.” Unless, of course, it gets immortalised in a film.