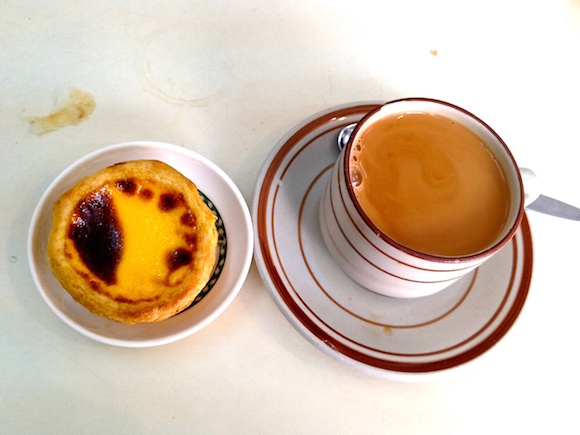 There are so many food blogs out there with plenty of lists on what to eat in Macau, and here’s my own humble list from a year of weekends spent in the sleepy casino country. I spend most of my time wandering around Taipa as we live on that side of town, so it’s a little Taipa skewed.

The story behind the Portuguese egg tarts is sweet – it all started with the nuns in Portugal using egg whites to starch their linen and didn’t know what to do with the egg yolks, so they made egg tarts. And this habit continued in  Macau when the missionaries came in the 1600s, the recipe has surely evolved from the original in Portugal and has become an iconic snack in Macau.

Despite what alot of people say, I don’t like the Margaret Cafe egg tarts. The queue and pilgrimage is not worth it. I find them a little too heavy and greasy on the crust and it leaves you feeling so icky oily after.

My fellow food blogger adventurer H brought me here. There’s an Ou Mun café in old Taipa village round the corner from our flat, but they only sell cakes and cookies. It was my first time trying out the Tigelada, a type of traditional Portuguese egg tarts (slightly different from Patéis de Natas that originated in Lisbon and you see everywhere on the streets of Macau). They are light and fluffy and have the similar consistency of a canelé and the traditional malay cake kuih bakar. Proprietor Fernando is Portuguese and have been in Macau for more than a decade so his dish is an adaptation of the central Portugal dish, made with less sugar and served with a side caramel. The coffees here are great, so be sure to order a cuppa to go with your dessert.

This little shop in old Taipa Village sells tiny egg tarts (1/3 the size of usual tarts) in different flavours like coffee, chocolate, green tea. Stick with the original egg custard flavour, the chocolate is interesting and not overpoweringly sweet, but still, an egg tart is an egg tart, so I’d recommend sticking with the original.

Tried and tested by millions of people, Stow even has franchises outside of Macau and recommended by possibly every guidebook on Macau. The hot tarts have delicious butter crusts that crumble upon first bite and the egg custard has smooth consistency—as opposed to bad tarts that taste almost synthetic. Avoid the Venetian branch as it’s all fast paced and touristy. Instead go to the Lord Stow Garden Cafe in Coloane that also serves decent sandwiches and quiches.

A very local confectionery that most people just walk past missing the lovely smells that spill over onto the streets. They are famous for their birds nest Portuguese egg tarts, but I find that the textures somewhat don’t go as a whole and is better left cooking in soups—the usual way it’s consumed. The regular egg tarts are delish, the crust is more flakey buttery pastry than crumbly shortcrust base. The coconut milk version is interesting but if you’re strict about authentic Po tarts, go with the egg tarts without the fancy dress.