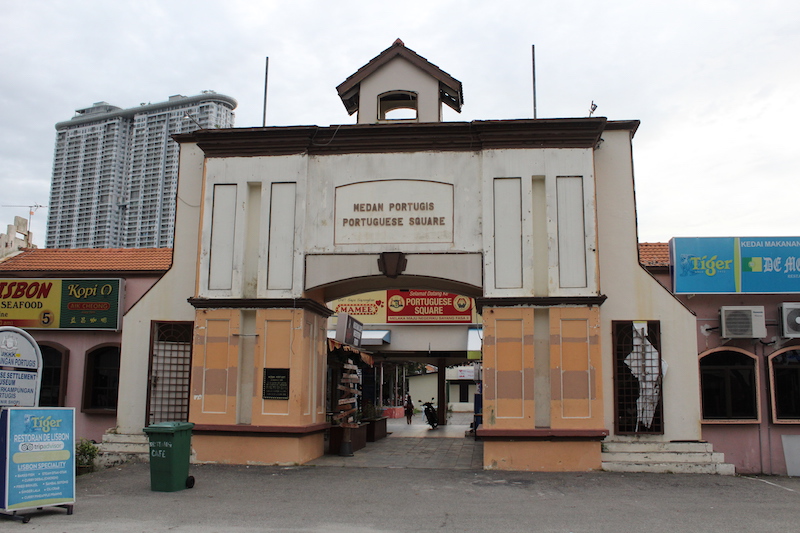 I took up the offer to visit my old friend Fish and spend time with her beautiful family who were on an NGO secondment in Melaka. Spending quality time and reminiscing about the old days over 17 years ago (!) had to be my favourite part of the trip, never mind the food.

I love seeing how my friends evolve as they become parents and raise happy, secure children with equally big and interesting personalities.

We ate our way through Jonker street, but didn’t bother too much with the super popular “must eat and instagram” sort of lists since our priority was spending time and catching up. 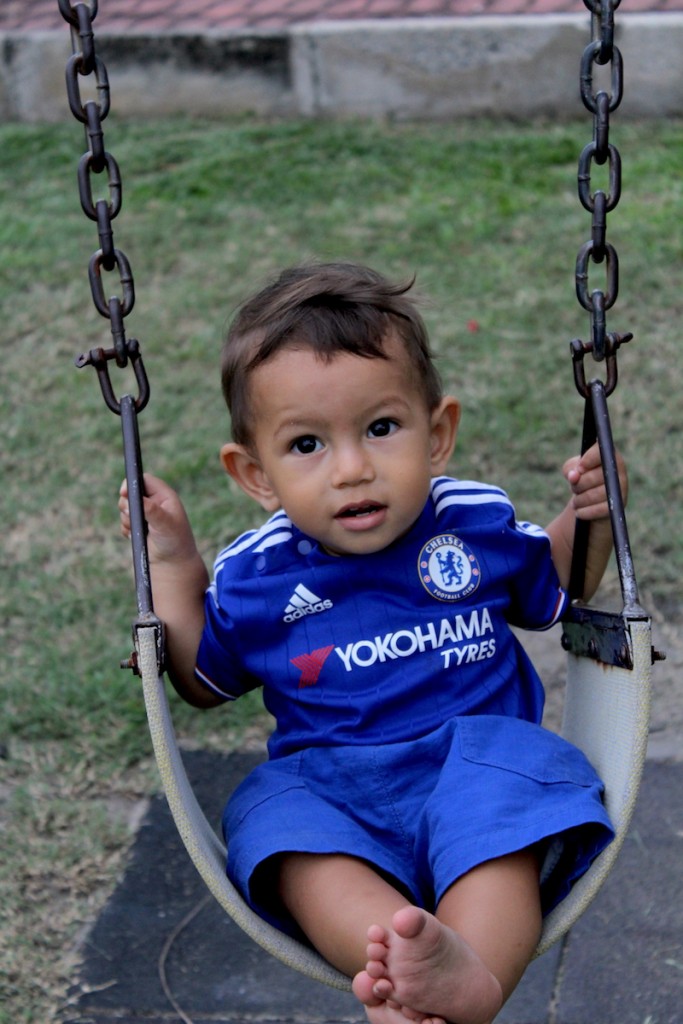 I haven’t been back here since a primary school excursion over 25 years ago (that makes me feel old!), so I was curious to see how similar to Macao it might be given that the Portuguese were in Melaka 50 years before they colonised Macao in the 16th century.

I followed the lead of Eating Asia and Chubby Hubby for some restaurant recommendations and stayed at a cute little hotel 1825 Gallery Hotel right by the canals. Not much has changed, which is what makes Melaka the sleepy town to charming and endearing, additionally the lists of restaurants they recommended years ago still exist.

Didn’t eat any chicken rice balls or the famous satay place. Nancy’s kitchen had moved from its original location and a long walk from Jonker street about 40 minutes that I didn’t brave the heat for. I also didn’t find the pasar malam that exciting or worth braving the sticky crowd for. You’ll find the usual kitsch knick knack souvenirs and food stalls.

Otah for breakfast Melaka style at Restoran Aunty Lee. It also came recommended by the bibiks at the Peranakan musuem as dining alone is a challenge as it’s not possible to order lots of dishes.  This otah was made with generous portions of fresh mackerel, instead of grilled over a charcoal stove, it was pan fried giving it a crisp outer layer, interesting and something different. 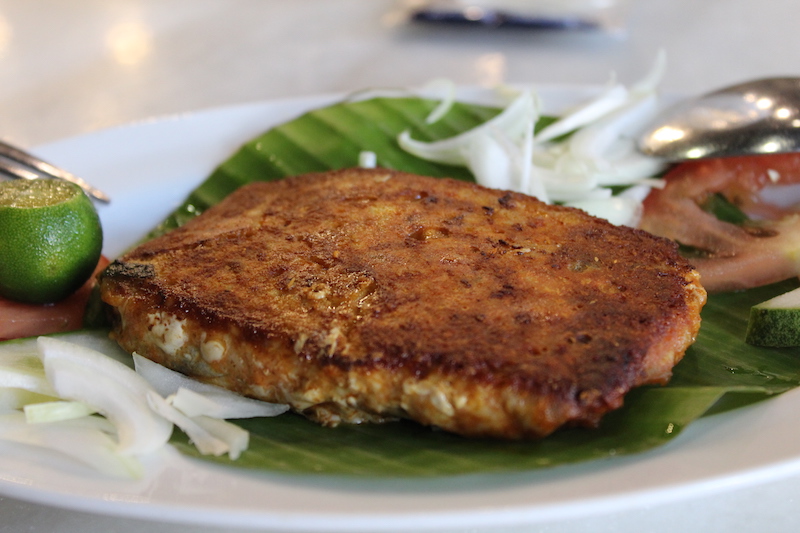 Everyone says to try chendoll in Melaka, I didn’t bother following the famous trial in search of the best, given that I was never a chendoll fan, but what a great way to cool down from the heat. I ended up having one at Famosa chicken rice restaurant. Didn’t have the chicken rice, but the cendoll wasn’t too bad. 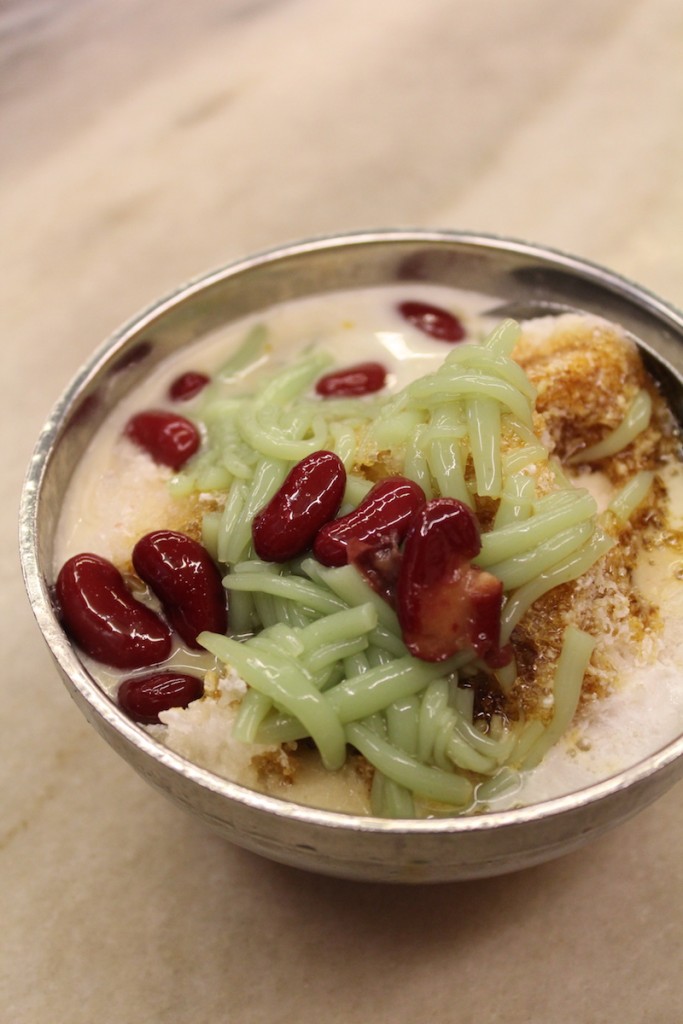 Mori Vegetarian restaurant and tea house was a pleasant surprise. Baby R was a little cranky from the heat, so we stopped at the nearest spot to grab a bite. Mori is a vegetarian restaurant/tea house, with hostel rooms upstairs. A very Taiwanese zen vibe about this place.

We had a rojak and hokkien mee (unlike the Singapore one, it’s cooked in a dark soy sauce) and had some floral teas. 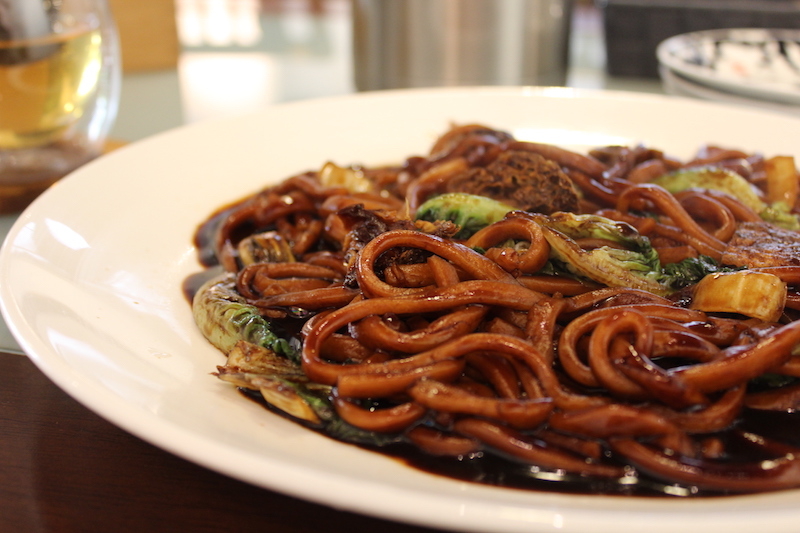 My friend’s favourite spot for popiah where locals go as it’s off the touristy streets. Kee Ann Road Dong Cheng Popiah  Soooooo good and there’s crispy pork lard added to the mix which gives it so much more flavour and bite. 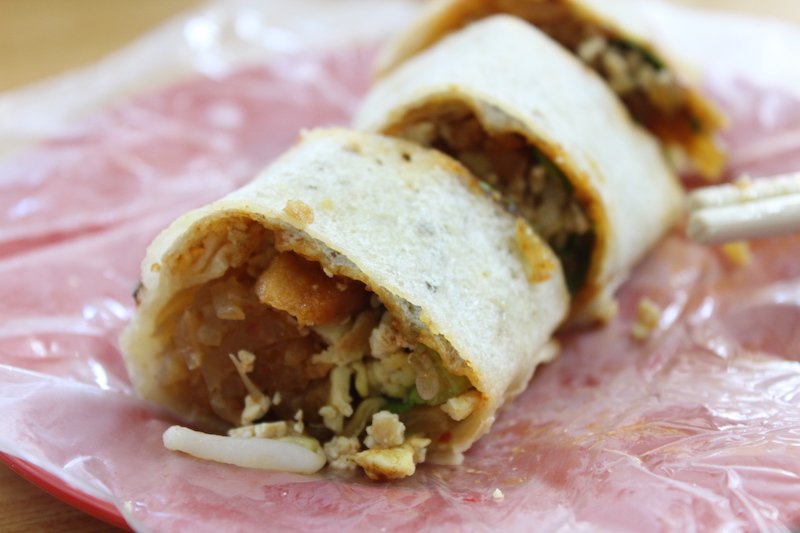 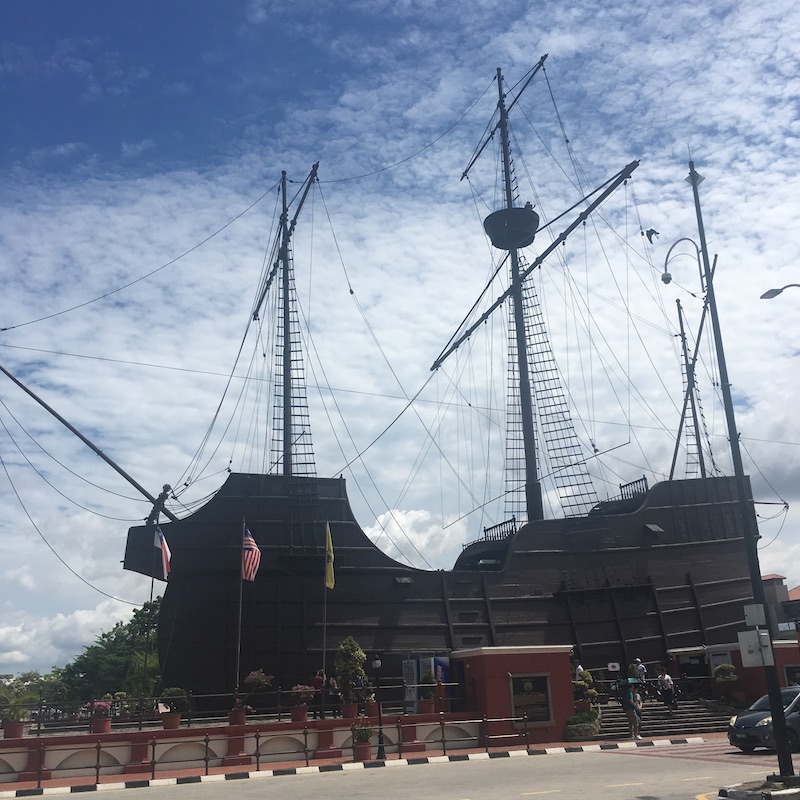 I’d recommend the Maritime museum, small but interesting housed in a real ship that the Portuguese used to sail in for their global conquest. And the Peranakan museum as well as the jewellery museum are both worth the visit. 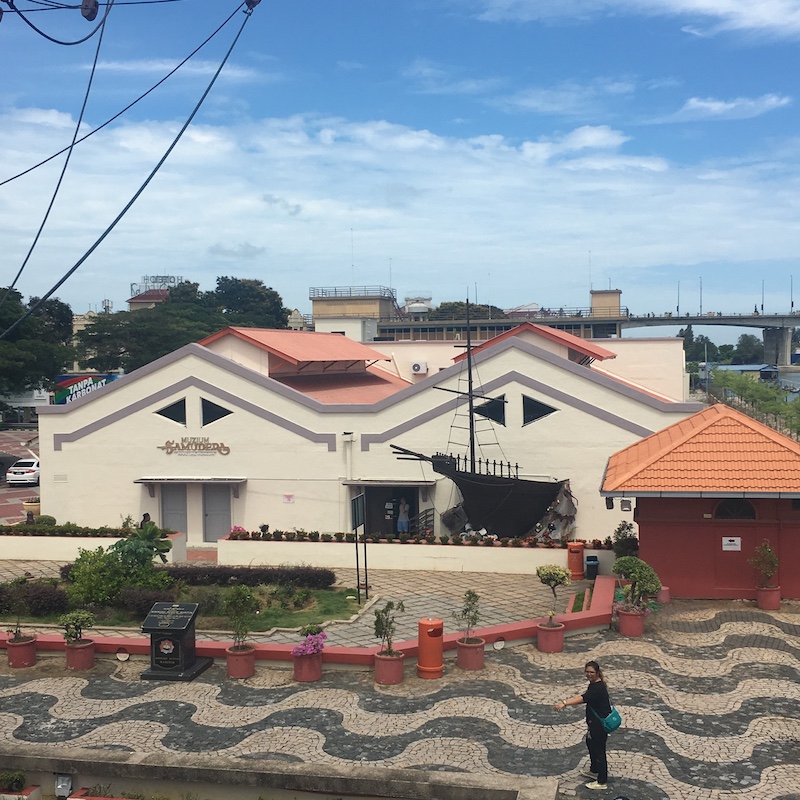 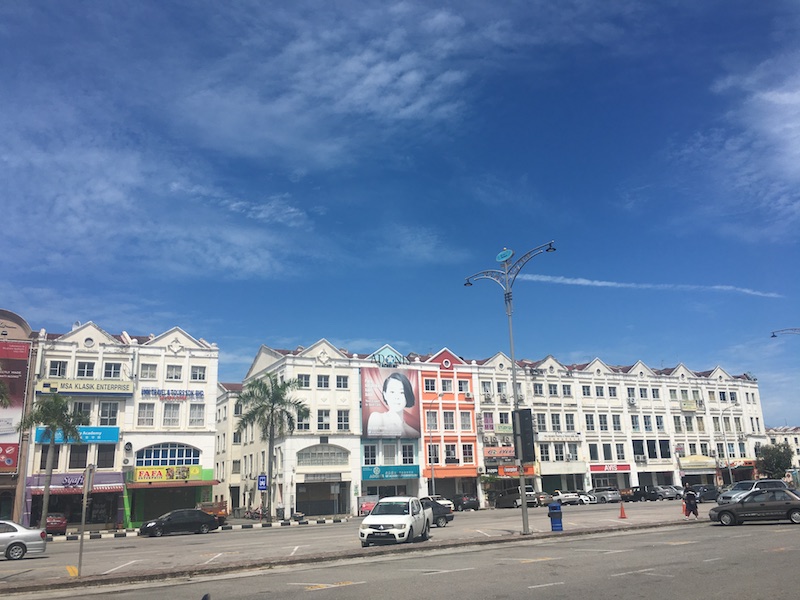 Tiny rows of houses. The houses along the canal reminds one of Amsterdam. (the Dutch also did make their way through Melaka a trading port) 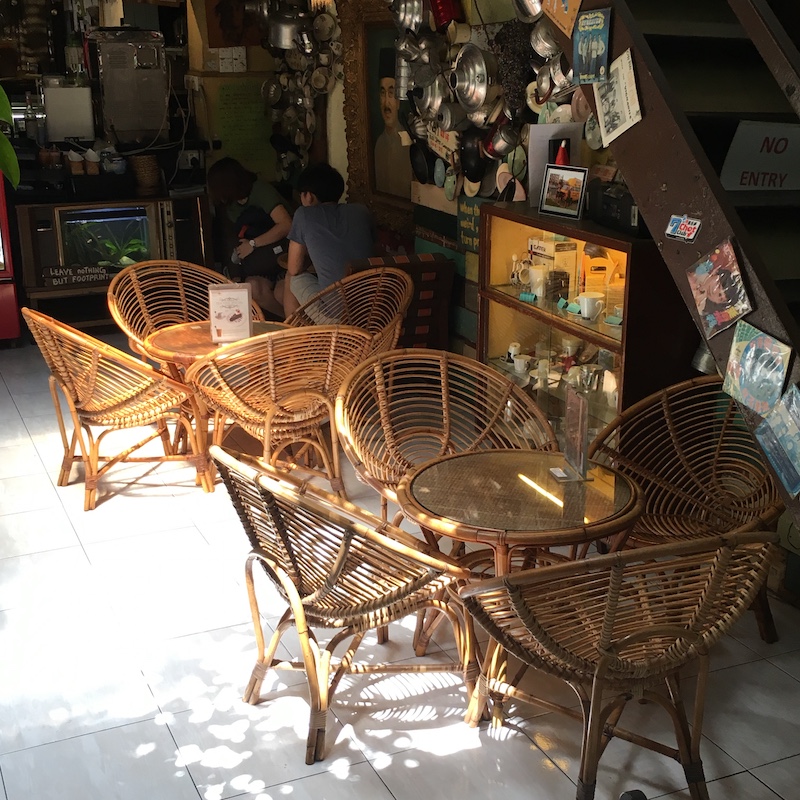 Calanthe Art café offers coffee beans from 13 states of Malaysia and you can have them in the form of lattes or espressos or the traditional kopi. The laksa here also comes higher recommended. 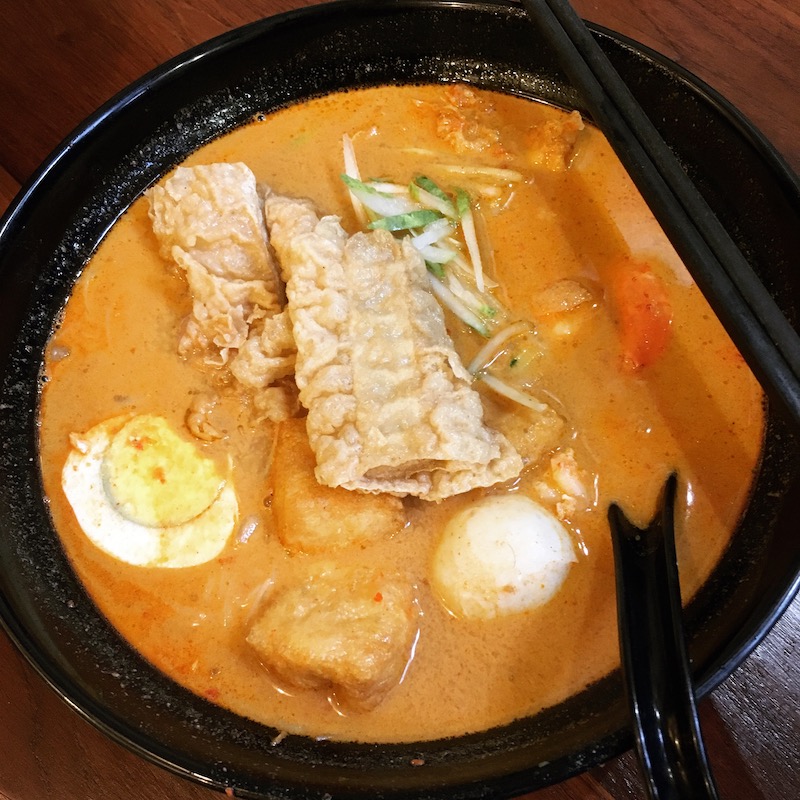 Jonker 88 for laksa. They offer two types assam (sour) gravy and nonya gravy. It was alright, I don’t know why people rave about it. The cendoll is suppose to be really good here too, it’s always busy and the service is potty. They have generous servings of tau pok and tau gwa (like yong dao fu) in a thick coconut curry based gravy. 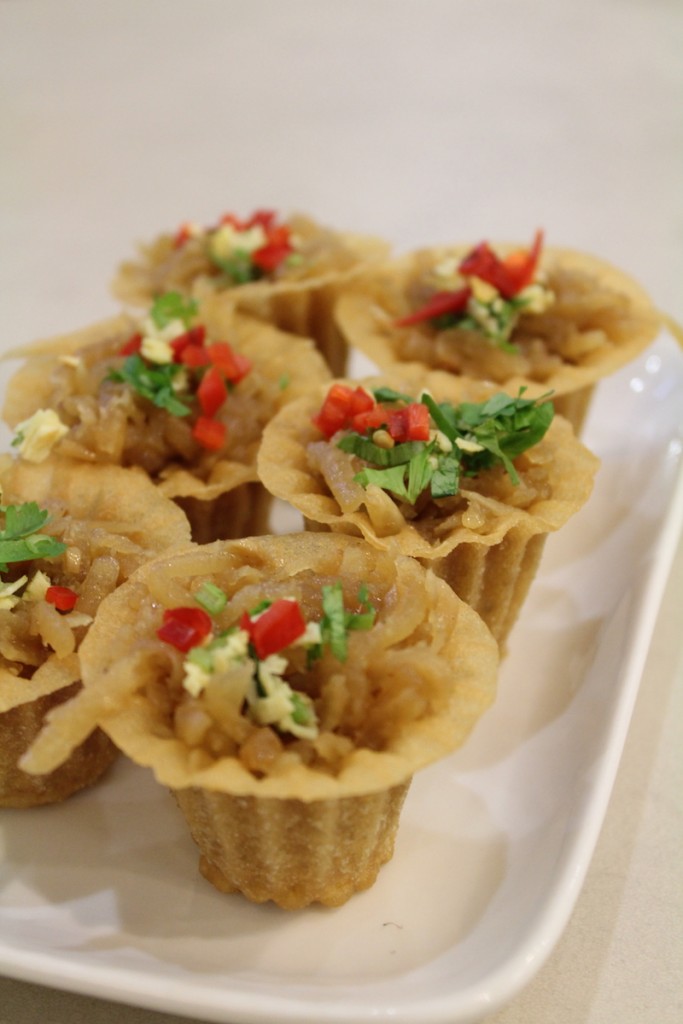 Everything we ordered at Amy Heritage Peranakan Restoran was what we expected. Ayam buak keluah, kueh pie tee (above), prawns with petai beans and a side of sambal kangkong. It gets really busy, we arrived at 6pm and didn’t have a reservation but got a table right away.

I spent several days reading and people watching from Geographer’s cafe. The nibbles (satay) were great, service is friendly and they have free wifi. The corner cafe is a fantastic spot to people watch and sip on fresh coconut juice or coffee. Also, a great pit stop to hide from the sweltering heat between eating and shopping.

Other snippets of Macao. Who knew that my friend O’s grandpa grew up in this Chee Mansion???! I was marvelling at how it’d fit right into a Wes Anderson film! 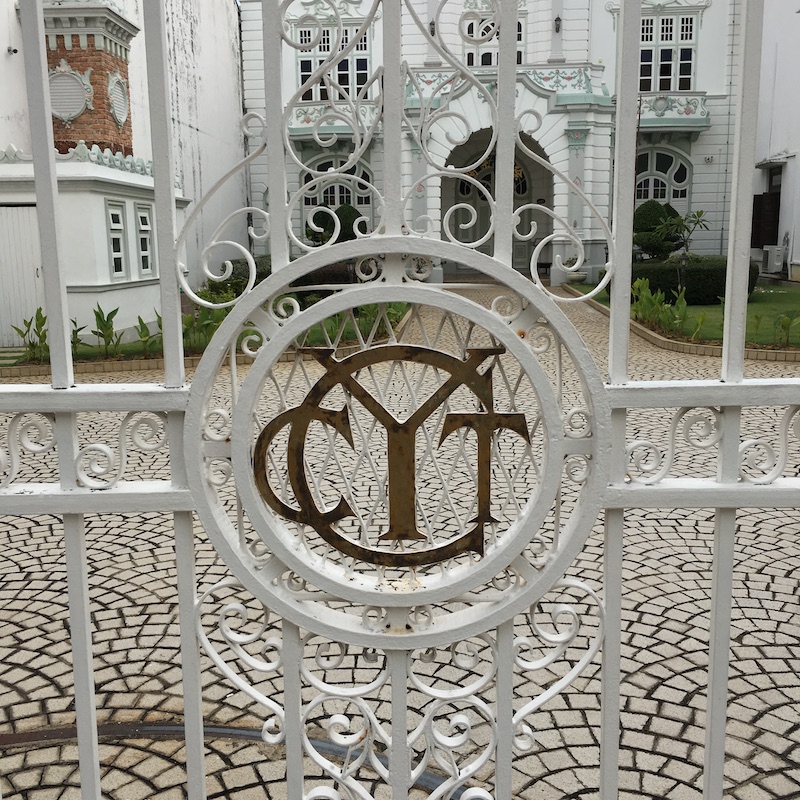 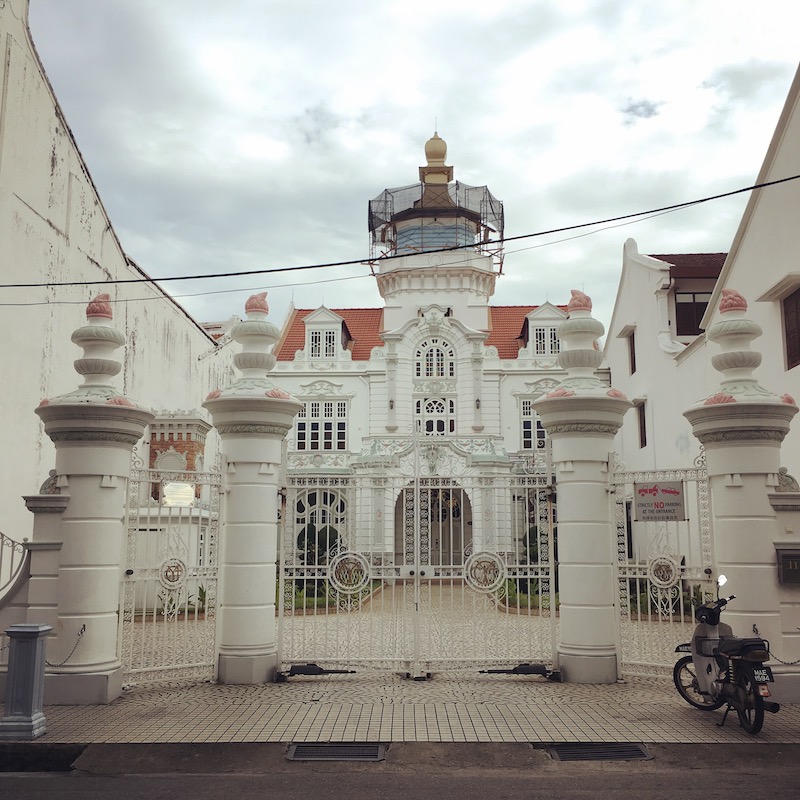 Beautiful architecture of Kampung Kling Mosque. Loving the Chinese accents in the roof tiles and the buddhist shrine like structure. 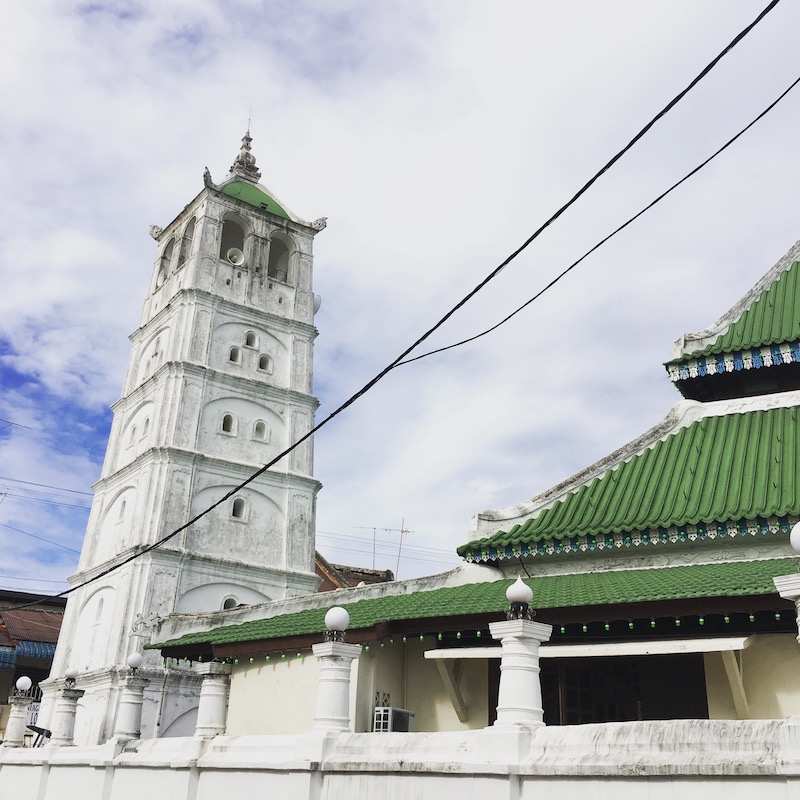 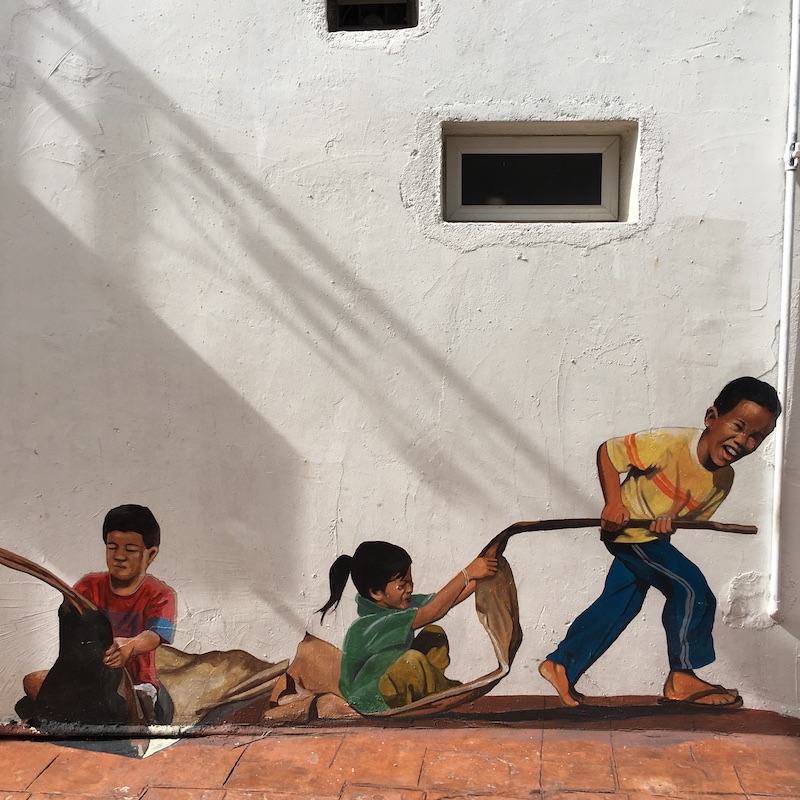 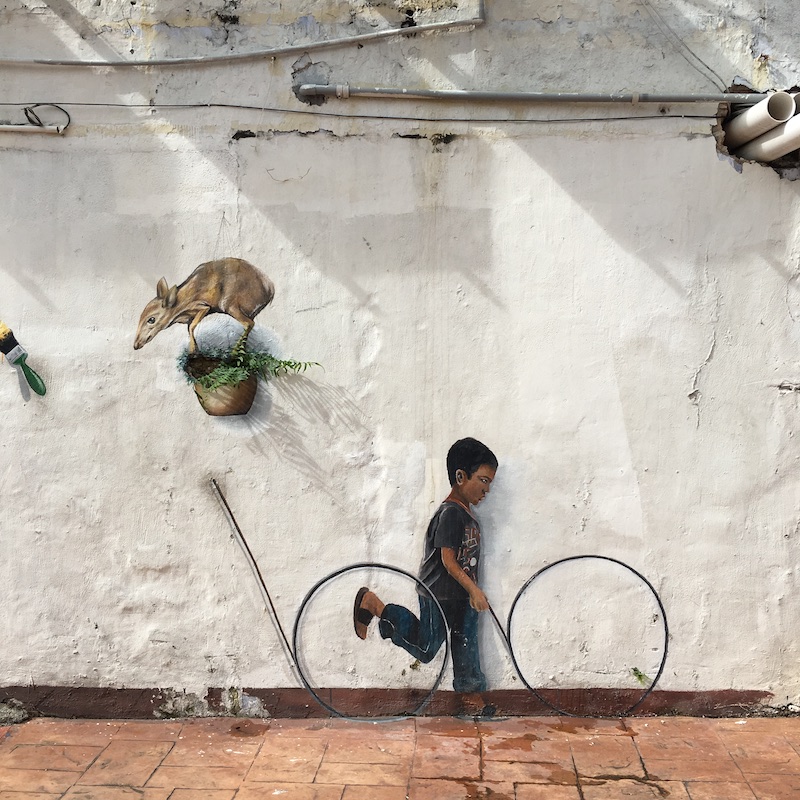 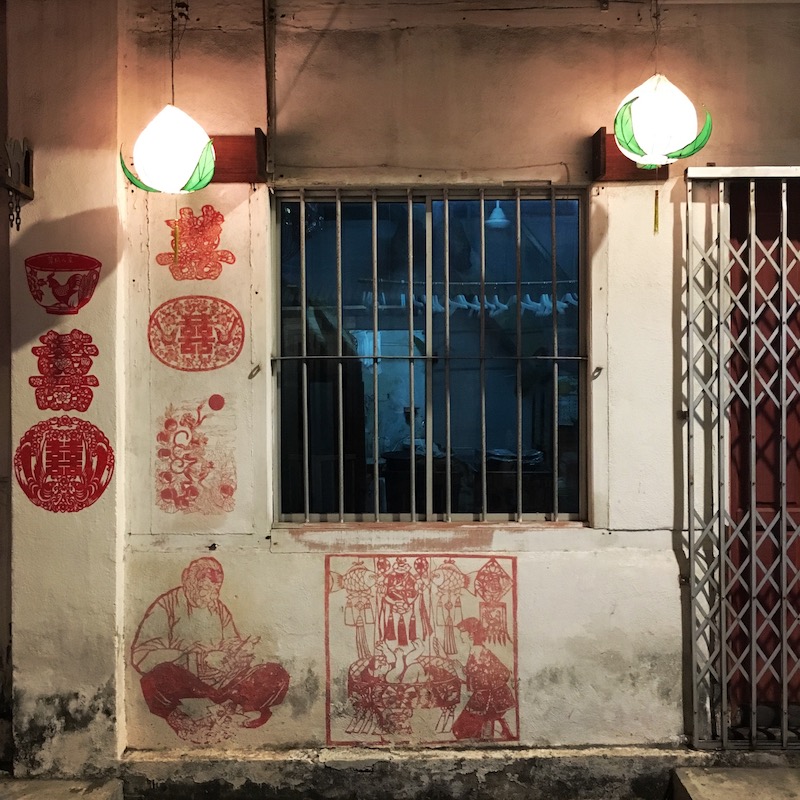 The lopsided gothic cathedral St Francis Xavier church built in the 17th century. Someone told me it was built on uneven ground (it tilts right) but stable. 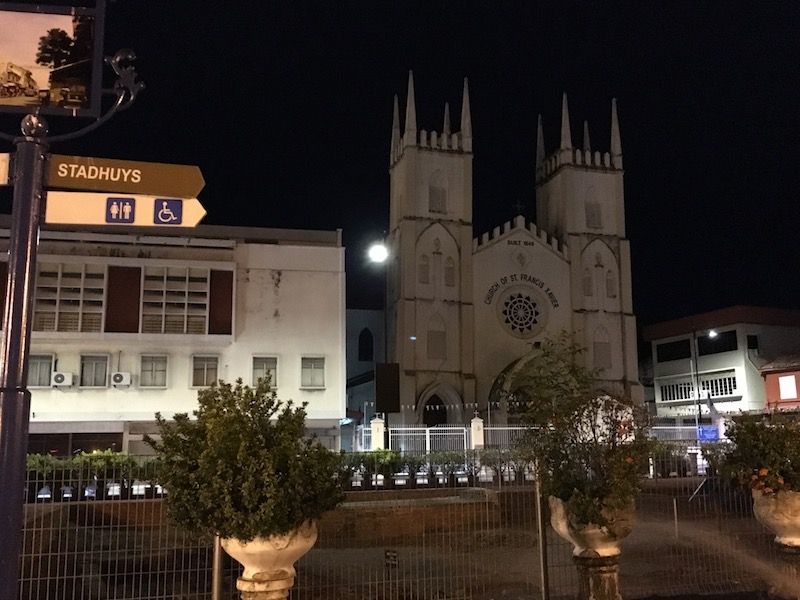