My story, a double page spread was out in yesterday’s Straits Times, it’s behind a paywall so I’m sharing it here as I always believed travel tips and info are best shared to enhance other people’s trips and experiences.

All the photos were taken by me except the Starbucks Roastery and Bvlgari hotel’s pool. 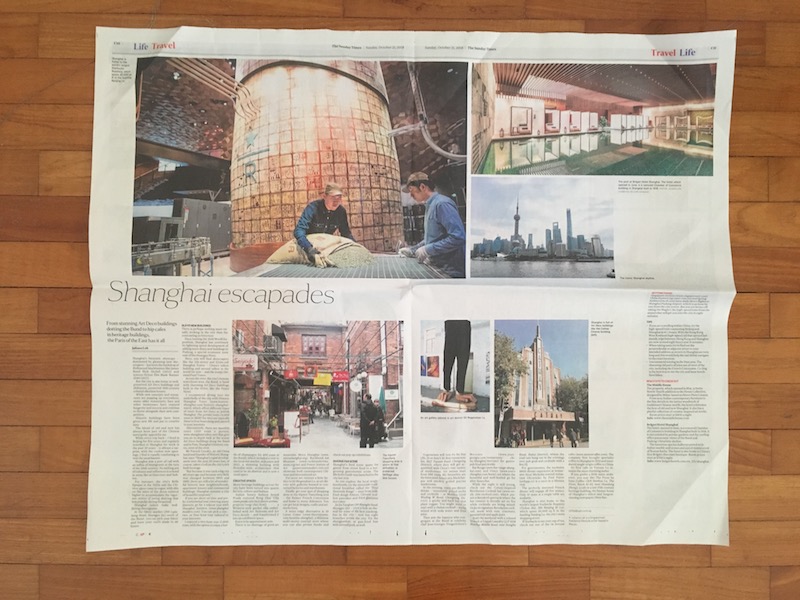 Shanghai’s futuristic cityscape – dominated by gleaming new skyscrapers – has been the backdrop of Hollywood blockbusters like the James Bond flick Skyfall and science-fiction film Blade Runner.

But the city is also home to well-preserved art deco buildings on the Bund and in the French concession as well as preserved 19thcentury colonial alleylane houses known as shikumen “Stone Watergate Houses”.

While new concepts and restaurants are popping up everywhere, many older restaurants, bars and other businesses have enjoyed longevity and success, and continue to thrive alongside their new competitors.

Historic buildings have been given new life and put to creative new uses.

The blend of old and new has always been part of the Chinese metropolis’ appeal for me. While every trip back is always a surprise with the coolest new openings, I find it equally comforting to visit the usual haunts.

Shanghai was a port of call with an influx of immigrants at the turn of the 20th century. Its melting pot of cultures and influences is echoed in areas like architecture and fashion.

For instance, the city’s belle epoque in the 1920s saw the Chinese qipao come in vogue, where slits on the side of the dress were tailored higher to accommodate the vigorous moves of swing dancing that was popular during the period.

Shanghai tailors make well-fitting cheongsams. At the fabric market South of the Bund (399 Lujiabang Road, Huangpu Qu), you can pick your fabric and have your outfit made in 48 hours.

There is perhaps nothing more visually striking in the city than the contrasting architecture.

Since hosting the 2010 World Exposition, Shanghai has continued its lightning speed development of adding more shiny new buildings to Pudong, a special economic zone east of the Huangpu River.

Here, you will find skyscrapers like the 128-storey and 632m-tall Shanghai Tower – China’s tallest building and second tallest in the world for now – and the iconic Oriental Pearl Tower.

Across the river, the city’s famous waterfront area, the Bund, is lined with charming art deco buildings built in the 1920s, like the iconicPeace Hotel.

I recommend diving into the underbelly of the city with Historic Shanghai Tours, which offers different types of tours from art deco to Jewish Shanghai. If you’re looking for a Jewish relative that predates 1949 in Shanghai, they can also help with that.

The private tours (3,000 yuan for two) are typically three to four hours long and catered to your interests.

Alternatively, there are monthly tours (250 yuan, or S$50, a person) that gives you an in-depth look at the iconic art deco buildings along the Bund and in Puxi, Shanghai’s historic centre west of the river.

Mr Patrick Cranley, an old China hand and founder of Historic Shanghai, shares says: “Shanghai’s rapid development over the past 30 years has of course taken a toll on the city’s rich built heritage.

“But because it was such a big city 80 years ago and because very little was changed between 1950 and 1990, there are still a lot of wonderful historic lane neighbourhoods, apartment houses and commercial buildings left. Shanghai remains a city of beautiful surprises.”

If you are short on time and prefer a whirlwind tour covering many districts, go for a sidecar tour with Shanghai Insiders. You can pick a one-, two- or four-hour tour tailored to your interests.

I enjoyed a two-hour tour (1,800 yuan with the option to enjoy a bottle of champagne for 400 yuan at the Bund), which included a visit to the local wet market, shikumen and 1933, a stunning building with Brutalist-style architecture that used to be a abbatoir and is now a retail space.

Many heritage buildings across the city have been turned into spaces for arts, culture and fashion.

For more art, venture a little further to 50 Mogenshan Lu, an art district with galleries housed in converted factories and warehouses.

Finally, get your spot of shopping done in the hipster Tianzifang area – the former French Concession and home to many shikumen. You can get local designs, crafts and artworks here.

A more edgy alternative is 10 Corso Como, the Milanese multi-storey concept store where you can also peruse books and check out pop-up exhibitions.

Shanghai’s food scene spans the gamut from street food to a burgeoning gastronomic scene. The Michelin Guide was launched in the city last year.

Jia Jia Tangbao (90 Huanghe Road, Huangpu Qu) – once as a hole-in-the-wall for some of the best xiaolongbaos in the city – now have eight branches across the city. Try the shengjianbao – a  pan fried bun filed with minced pork, as well.

You might want to start with a chuhai cocktail –sochu mixed with soda water and fruit juice.

Then join the hipsters who congregate at The Bund at celebrity chef Jean George’s Mercato for gastro pub food and drinks.

www.bar-rouge-shanghai.com and Unico are where the beautiful and well-heeled go for after hours fun.

While the night is still young, check out the Cuban-inspired Revolucion Cocktail bar, which puts up a daredevil spectacle where the entire bar counter is literally set on fire while cocktails are being mixed. 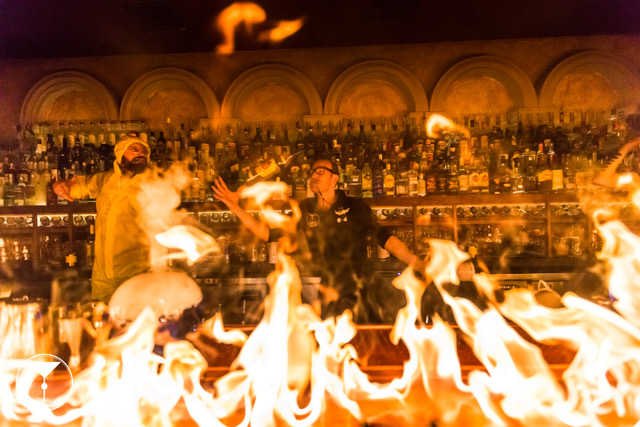 Start the weekend with a relaxed brunch at Liquid Laundry (2/F 1028 Huaihai Middle Road, near Donghu Road, Xuhui District), where the cool cats hang out in the evenings over pub grub and cocktails with a live DJ.

The perfectly executed French dinner will engage all five senses. Only 10 seats at a single table are available.

If Starbucks is not your cup of tea, check out one of the 14 Seesaw cafes, who first brought speciality coffee to Shanghai in 2012 and introduced single origin coffee to China.

The original first cafe on Yuyuan Lu remains the most charming outlet.

If you prefer a little more ambience, you may like The Press by Inno Coffee (309 Hankou Lu, The Press, Room A1-03, near Shandong Zhong), a cafe in a late 17th-century heritage building, the former home of Shanghai’s oldest and longest-running newspaper Shen Bao.

Singapore Airlines (www.singaporeair.com), China Eastern airline (sg.ceair.com/en) and Spring Airlines en.ch.com) have daily direct flights to Shanghai Pudong Airport, which is an hour by taxi from the city centre. But you are better off taking the Maglev, the high-speed train from the airport that will get you into the city in eight minutes.

If you’re travelling within China, try the high-speed train between Beijing and Shanghai in 4-1/2 hours. With the Hong Kong West Kowloon high-speed rail that opened last month, trips between Hong Kong and Shanghai are now around eight hours and 18 minutes.

When taking taxis, always try to find out the perpendicular or adjacent street to your intended address as streets in Shanghai are very long and this would help the taxi driver navigate to the exact location.

I recommend staying in the Puxi area. The charming old parts of town are all westof the city, including the French Concession. Cycling is the best way to see the city and most hotels would have bikes.

NEW STAYS TO CHECK OUT

The property, which opened in May, is Swire Hotels’ fourth addition to the House Collective, designed by Milan-based architect Piero Lissoni.

From sexy Italian contemporary furniture to the fine details in lattice woodwork of traditional Chinese motifs, the hotel celebrates the best of old and new Shanghai. It also has a playful collection of ceramic inspired art works.

The hotel, opened in June, is a restored Chamber of Commerce building in Shanghai built in 1916. It is surrounded by private gardens, and the rooftop offers panoramic views of The Bund and Pudong’s futuristic skyline.

The luxurious spa has hallways paved with Italian marble and stones and a pool reminiscent of Roman baths. The hotel is also home to China’s first Bvlgari chocolate boutique. Room prices start at $700 a night.